Watch Video: Drone formations at Vijay Chowk in Delhi on the occasion of Republic Day 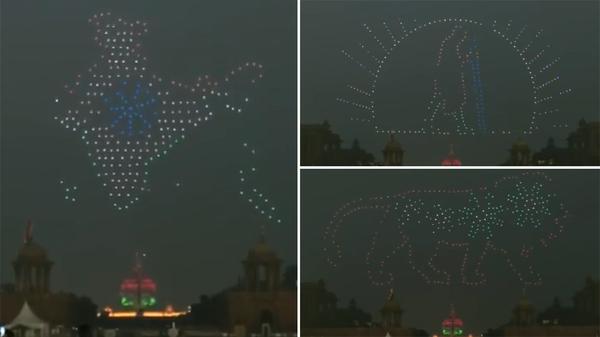 On the eve of Republic Day 2022, 1,000 Made in India drones made different formations as a part rehearsal for the Beating Retreat ceremony, at Vijay Chowk. Beating the Retreat Ceremony will take place on January 29. There will be many firsts at this year's Republic Day celebrations.

About 1,000 drones were lit up the sky for the 'Beating the Retreat Ceremony'. India became the fourth country to carry out such a show.

The drone show will be 10 minutes long and will showcase government “achievements@75” through many creative formations in the dark sky.

A start-up supported by the Technology Development Board, under the Department of Science and Technology (DST) and incubated at the Indian Institute of Technology, Delhi is conducting the drone show, the science and technology minister had informed.

As per the Manohar Parrikar Institute for Defence Studies and Analyses website, the drone show was designed and produced by the startup Botlab Dynamics and it has been sponsored by the Indian Institute of Technology Delhi and the Department of Science & Technology as part of the “Make in India” initiative.

(To receive our E-paper on whatsapp daily, please click here. We permit sharing of the paper's PDF on WhatsApp and other social media platforms.)