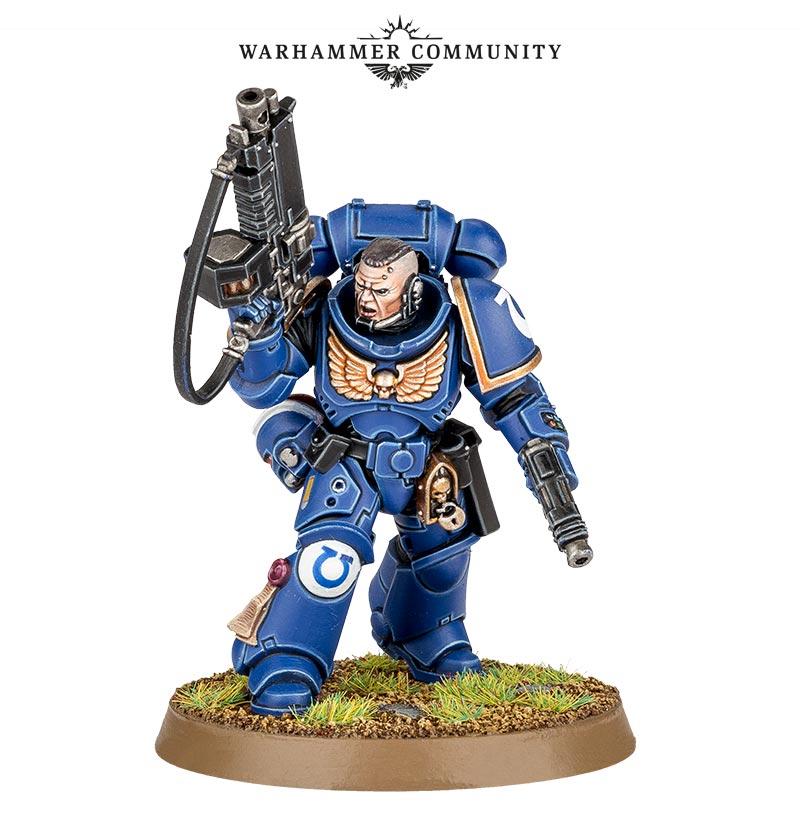 The Warhammer 40,000 franchise gets its eighth edition this month. Along with it comes a new look for the venerable Space Marine faction and a new boxed set called Warhammer 40,000: Dark Imperium. The starter kit, which includes an opposing force of Chaos Space Marines, is set to release worldwide this month. Pre-orders begin this weekend, and the first sets will be in players’ hands on June 17.

Games Workshop’s marquee franchise kicked off in 1987 with the release of Warhammer 40,000: Rogue Trader, a spinoff of its swords-and-sorcery-themed Warhammer franchise. The elaborate tabletop miniatures game has been a fixture of the hobby scene ever since.

The centerpiece of this new starter set are the Primaris Space Marine, literally a new breed of the Emperor’s finest that’s been painstakingly manufactured over the last 10,000 years. In addition to their enhanced physique, Primaris Space Marines also come with new gear.

“Mk X Tacticus armour,” Games Workshop wrote on its community page, “is a suit that combines the most effective elements of ancestral Horus Heresy patterns of plate with more recent developments in power armour technology. He carries into battle a bolt rifle: the archetypal firearm of Space Marines, re-engineered, re-crafted and perfected.”

These new Space Marines are more slender than their forbears, and also stand taller on the table. In addition to reworked weapons and backpacks, they also seem to have more room around the helmet and face thanks to an enlarged gorget. That should make them a bit easier to paint. The weapons have also been scaled up, but not so much that they appear cartoonishly big. A scan from the most recent issue of White Dwarf magazine, posted to the Warhammer community page, gives some more details on what all is going on with the new Tacitus armor.

The birth of Primaris Space Marines is a break with tradition. For as long as there’s been a Warhammer 40,000 the Space Marines have been somewhat immutable. This eighth edition rebrands them as a new fighting force for humanity, and what that means on the table is still anyone’s guess. So far, Games Workshop has only said that there will be rules to allow Primaris Space Marines and legacy Space Marines to fight alongside one another in the same army.

Games Workshop’s lore states that Primaris Marines have been used to create entirely new Chapters and reinforce existing Chapters in the field. However, not everyone in the far future is a fan.

“Many Chapter Masters have welcomed their Primaris brethren into their ranks, accepting the new reinforcements gladly,” Games Workshop wrote. “Others, though, view these new creations with suspicion or outright hostility, claiming that the Emperor’s work should not have been meddled with.”

The Ork faction has long been a staple of the 40,000 universe, and has featured prominently in past starter sets. The storyline has drifted over the past few years with the forces of Chaos playing a larger role than ever before. It makes sense then that Dark Imperium comes with a full complement of Chaos Space Marines to do battle with.

These particular Chaos Space Marines are from the Death Guard, and feature a unique set of sculpts.

“Plague Marines [are] the archetypal unit of the XIV Legion swollen with the raw power of decay,” wrote Games Workshop, “These form of the core of any Death Guard force. Nurgle fans will also be pleased to see a shambling plague host represented by the repugnant and varied Poxwalkers, each draped in scraps of clothing from their former lives. There is a new vehicle on offer too — the Foetid Bloat-drone, a floating Daemon Engine that hunts its prey with a malign intelligence.”

It sounds like the launch of this starter set is the first of many new product announcements for eighth edition. There are also new books, dice and player aids on the way.

“Dark Imperium is really just the beginning,” wrote Games Workshop. “The launch lineup for the new edition of Warhammer 40,000 is the most extensive we’ve had for any game we’ve ever released.”

Fans can pre-order the new starter set at their friendly local game store or online starting June 3. We reached out to a Games Workshop retail location, and it expects supplies to be severely constrained. The sets are expected to ship to fans, and arrive in stores, on June 17. A price has not yet been announced.