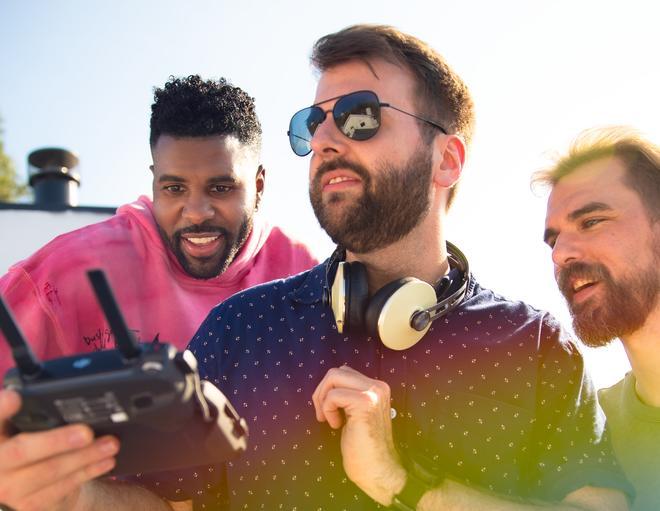 With the swinging of his hips and a drone in flight, Tyler native and UT Tyler graduate David Allen has become a TikTok superstar with over six million followers. Through his creative videos, he’s gained the attention of celebrities like singer Jason Derulo and television personality Dr. Phil.

The video that went viral this summer garnered 37.4 million likes and has been played over 233 million times on Allen’s account, @totouchanemu.

His TikTok clip, titled “Stay,” features Allen, 32, who watches a content creator dancing in a humorous way to the song “Stay” by Justin Bieber and The Kid LAROI.

In the video, Allen is surprised by the number of likes the video received, and takes to recreate his version but with the addition of a drone he often uses in other TikToks.

The camera circles around him dancing and swaying his hips while the feel-good music plays in the background.

Allen’s goal with his recent series of TikTok videos is to encourage others to go with the flow and not care what people think.

“When I film the TikToks, people, a lot of times they look and laugh because I’m some guy on Venice Beach with jeans and boots and a button-up shirt, dancing his (behind) in the sand,” he said. “It’d be pretty easy to be embarrassed, but I guess it just comes with age but I don’t care. I’m just like yeah, maybe I do look ridiculous, that’s great. People are going to think what they think.”

Since the first video was published in late July, Allen has recreated the video several times at different places including Los Angeles and Austin, and he has collaborated with Derulo and Filipino-American social media personality and singer Bella Poarch.

Recently, Dr. Phil McGraw, who is known for the talk show “Dr. Phil,” mimicked Allen’s dance moves and drone videography on his own TikTok account.

“It was shocking and very cool and surreal. I don’t watch daytime TV myself. But everybody knows Dr. Phil,” Allen said.

After seeing Dr. Phil’s video, Allen filmed a reaction TikTok video showing his excitement. Allen said it’s unreal these celebrities and big-name personalities are reaching out to him.

“It feels like a movie. Instead of question it and argue with it, I’ve decided to go with it,” he said.

The opportunities come from Allen’s availability. He said anytime someone reaches out, he writes back and the rest is history.

“If my TikToks were doing pretty well, I’m sure I would need someone to help me outreach to set up collabs, but that TikTok is doing so well that people are reaching out to me. I didn’t intend that. I didn’t necessarily even want it, but they reached out and I’m open to it,” he said, adding he’s open-minded and willing to share his time.

Like many other creators, Allen started posting last year when the COVID-19 pandemic began.

His initial goal wasn’t to go viral. In fact, he had gone some time without posting as his inspiration rose and fell. He decided to take a step back as a content creator and began using the app as a consumer to see if he could learn new trends or techniques.

Allen said he had been posting low-effort content and was lazy, although he was still sitting on 500,000 followers.

“I was watching TikTok and I saw Max Taylor Lifts and the video popped up on my feed,” Allen said.

Most comments on Allen’s video say he’s “a vibe,” and that viewers like it.

He said his TikTok name originates from a photo of himself as a child pointing at an emu that used to run around a friend’s house. That photo inspired his Xbox screen name, and the moniker stuck for TikTok.

Before going viral with the “Stay” TikTok, Allen had gotten a good amount of likes and views on a humorous video about having to wash rice before being cooked. Allen makes a joke out of the cooking tip by pretending to wash rice with dish soap.

“It’s very tongue and cheek. It’s not supposed to be disrespectful to anyone. It’s just funny, and that one got like 200,000 likes,” Allen said.

He graduated from UT Tyler in 2017 where he studied chemistry. Allen has his own photography business, David C. Allen Photography. He’s been taking wedding photos for about eight to nine years now, he said.

He visits Tyler often for work and to see family and said he always swings by The Foundry Coffee House in downtown Tyler.

Today, Allen lives in Austin with his girlfriend and dog, whom he makes TikToks with every once and a while. He works full-time in his photography business. He’s working on making connections on TikTok and social media and hopes to transition into videography, model or product photography.

Zak Wellerman contributed to this report.

Tags:  how to edit drone photos