To see Iran's true foreign policy, look to the Gulf, not Vienna 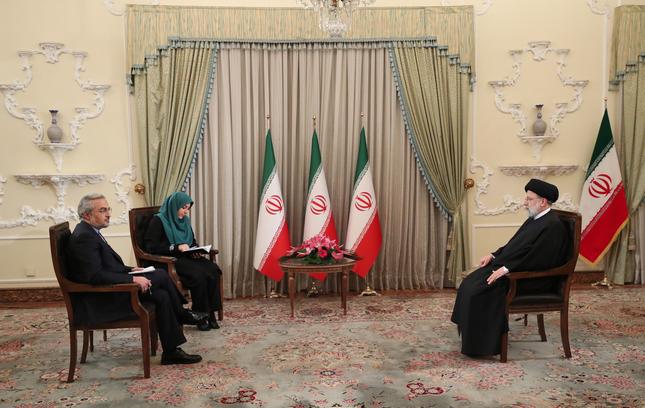 The recent upsurge in attacks by Iran-backed Houthi rebels against civilian targets in the UAE inevitably raises questions about the seriousness of Tehran’s commitment to talks currently taking place in Vienna over its nuclear programme.

Although the negotiations have been taking place for several months, with European diplomats taking the lead role in discussions with the Iranian delegation because the US and Iran have yet to agree to establish a direct dialogue, all the indications are that progress is painfully slow.

Western negotiators have accused the Iranians of playing for time and not approaching the negotiations with sufficient seriousness, preferring instead to concentrate their focus on their nuclear enrichment activities, which have now moved well beyond the limit originally agreed in the 2015 deal concluded with the help of the Obama administration.

Indeed, with Iran expected to reach the enrichment threshold to produce weapons-grade material in the next few weeks, there is a general acceptance that, if a deal is not forthcoming soon, then the negotiations will collapse, with all the implications that are likely to happen for security in the Gulf region.

There is, after all, little point in pursuing a deal to restrict Tehran’s ability to enrich uranium to the level required for producing nuclear weapons if the Iranians have already achieved that worrying benchmark.

With the nuclear negotiations therefore reaching a critical juncture, Gulf security officials believe many of the attacks being carried out by Houthi rebels in Yemen, which have received significant military backing from Iran, can be linked to the nuclear talks, and are a blatant attempt by Tehran to pressure the West into making concessions at the Vienna talks.

Iran’s official position is that the Houthis are acting independently of Iran, and that Tehran has little influence over their terrorist activities. But Gulf security officials paint a different picture, and have assembled an impressive amount of evidence that points to deep-seated Iranian involvement in many of the Houthi terror attacks carried out in the region in recent years.

These include fragments of missiles and drones used in attacks against the Saudi-led coalition bearing manufacturing marks of Iranian companies, hordes of Iranian-made weapons seized in boats travelling from Iran to Houthi-controlled ports in Yemen and reports of Iranian technical experts travelling to Yemen to assist Houthi extremists assemble Iranian-made ballistic missiles, which are then used to attack coalition targets in Saudi Arabia and the Gulf.

Comment from The National
Could the ICC prosecute European officials over Libya migrants?
Even as Syria's war winds down, winter in Damascus remains bleak
The West's role in the 1960s massacre of Indonesian communists

With mounting evidence of Iran’s direct involvement in providing significant military support for the Houthis, including the delivery of long-range missiles and drones, Gulf security officials have little doubt that Iran is playing an active role in helping to direct the Houthis’ terrorist activities, including this month's series of attacks against the UAE.

Following last week’s co-ordinated attack against a number of targets in the UAE, in which three people died and six were wounded after fuel lorries exploded near Abu Dhabi International Airport, two ballistic missiles fired by the Houthis at Abu Dhabi were intercepted and destroyed.

And there is a growing belief among Gulf diplomats that the recent upsurge in attacks against the UAE, as well as the Houthis continuing their attacks against Saudi positions, is directly linked to the Vienna talks, and Tehran’s attempts to pressure Western negotiators into agreeing a deal that is favourable to Iran.

“Even though Iran’s official position is that it has no official control over the Houthis, the reality is that Iran is deeply involved in the Houthis’ terrorist activities,” commented a senior Gulf security official. “All the indications are that Iran is orchestrating these attacks to increase the pressure on the West to make concessions over its nuclear programme.”

Gulf diplomats point out that the recent Houthi attacks come at a time when a number of Gulf states, including the UAE, have launched diplomatic efforts to engage with Iran in an attempt to reduce regional tensions.

The recent escalation in Houthi attacks has attracted universal international condemnation, with the UN Security Council last week passing a unanimous motion condemning the attacks against the UAE.

The upsurge in Houthi violence has also led to calls for Washington to re-designate the Houthis as a terrorist organisation. The terrorist designation was originally applied against the movement in the dying days of the Trump administration, but was subsequently lifted when US President Joe Biden took office, a move that was seen as a goodwill gesture towards Iran as his administration sought to revive the 2015 nuclear deal.

But, rather than encouraging the Houthis and their Iranian backers to adopt a more constructive approach to efforts to reduce regional tensions, Gulf security officials have identified a sharp increase in Houthi terrorist activity since Washington lifted the terrorist designation, with an uplift in both missile and drone strikes against coalition targets.

“After the terrorist designation was lifted, it is clear the Houthis believed they could resume their terrorist operations because no one was prepared to stop them,” commented a Gulf security official.

With the Houthis and their Iranian backers seemingly unwilling to curtail their terrorist activities in favour of pursuing a diplomatic resolution of the conflict, the UAE has reportedly entered discussions with the US about upgrading its defensive capabilities in the wake of the recent attacks against UAE targets.

Lana Nusseibeh, the Emirati permanent representative to the UN, told CNN earlier this week that security discussions with Washington were taking place, but declined to provide details. The UAE currently uses the US anti-missile interception system THAAD.

"Our ability to intercept and deflect these attacks is world class," she said. "There can always be upgrades and improvements and ... additional intelligence co-operation and I think these are the fields we're looking at with our partners."

Such measures would not be necessary if Iran was serious about reducing regional tensions by engaging constructively with the Vienna talks. Instead, the fact Iranian-backed Houthi rebels are escalating their terrorist activities means that tensions – in the short term, at least – are likely to increase.