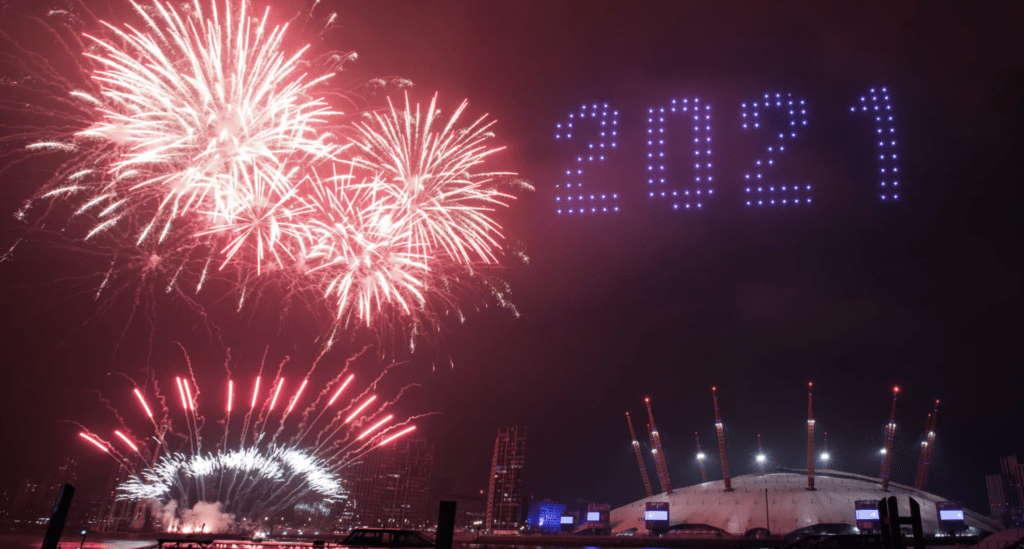 - PERFORMED FROM THE OLD ROYAL NAVAL COLLEGE, GREENWICH & OVER THE RIVER THAMES AS PART OF THE MAYOR OF LONDON NEW YEAR'S EVE SPECTACULAR

LONDON, Jan. 3, 2022 /PRNewswire/ -- London welcomed the new year with a dynamic broadcast show that took place across the city, celebrating its diverse cultural heritage and spreading a message of hope and positivity for 2022. For the first time, the London Borough of Greenwich played host to the main spectacle. SKYMAGIC, the world's leading drone light show specialists, worked with Jack Morton, the global brand experience agency, who created and produced the live show on behalf of the Mayor of London. With a dedicated team of experts SKYMAGIC in collaboration developed the concept drone imagery to enhance the extraordinary New Year's Eve experience.

The six minute show was broadcast live on BBC1 and iPlayer as part of a longer thirteen minute spectacular, watched by a global viewing audience of millions. SKYMAGIC flew a fleet of 500 drones to deliver the UK's largest ever drone light show, telling an even bigger story above the London skyline with the iconic cityscape as the canvas. Our drones performed using cutting edge RTK technology that delivers improved GPS accuracy and high-definition images, as well as faster transitions between moves, to depict some of the most exciting moments to come in 2022.

The show explores abstract and conceptual elements in a celebration of live entertainment, drawing on festival and party themes, music moments and sporting highlights. Some of the key original motifs included Elton John's iconic Keyboard, a powerful roaring Lion and an explosive Party Popper moment amongst others.

To create London's New Year's Eve light show celebration, our performance drones appeared alongside pyrotechnics from Titanium Fireworks and lighting design from Durham Marenghi, all set to an original music production by On the Sly Productions.

SKYMAGIC have delivered some of the most spectacularly choreographed drone shows across the world and is the first company to deliver drone light shows in the UK, Japan, Greece, Morocco, Azerbaijan, Switzerland and the UAE.

Patrick O'Mahony, Creative Director of SKYMAGIC commented, "We were delighted to collaborate again with Jack Morton to design and deliver the drone light show for London New Year's Eve for the second year running. Building on last year's show, we have returned to the capital with a larger fleet and having developed our drone division both technologically and creatively. The 2022 show tells a celebratory story with an emphasis on three-dimensional formations, conceptual shapes and complex trajectories."

Jim Donald, Production Director, Jack Morton added, "We are honoured to have brought the UK's largest drone show to London in 2022, and I am delighted to have collaborated with the SKYMAGIC team again to deliver this above the skies of London. It has been an absolute pleasure to work with the UK's leading drone light show company."

The show aimed to send optimistic messages for the upcoming year and anticipation of our return to live entertainment. Key moments throughout the show were:

Looking forward to the UEFA Women's Euro 2022, our enormous roaring lion illuminated the skies above the River Thames; the huge three-dimensional form appeared, rolling its head and twinkling its shimmering mane, in proud celebration of England's national football team, the Lionesses.

Playing to the music of Elton John, our undulating keyboard and iconic star-shaped sunglasses provided a playful moment in the show, as the drones visually augmented the scene from sound to skies, in tandem with the music score.

For the carnival scene, the concentric feathers of our abstracted head-dress fanned outwards in a revolving display. A plethora of multicoloured LEDs shimmered through the shape, in joyous celebration of street parties, festivities and carnivals nationwide.

SKYMAGIC is one of the world's leading drone light show companies based in the United Kingdom and Singapore. We are an award-winning team of creatives, technologists and storytellers and have worked in over 25 different territories worldwide since launching in 2015. Our diverse team has over 15 years' experience within the global entertainment industry and UAV swarm technology. The last year has seen us developing our technology, expanding our team and constantly increasing our capabilities both technologically and creatively. We continue to scale-up; our specialist team spans across backgrounds in technology, live events, robotics, marketing, aeronautical engineering, content creation, logistics and PR.

Our proprietary swarm software system has been developed to control mass drone flight formations for both outdoor and indoor shows. We work with clients to unlock the most creative approach to telling their stories. SKYMAGIC has performed more shows across the Middle East than any other company and have had the privilege of being the first company to deliver drone light shows in the United Kingdom, Greece, Morocco, Japan, Switzerland, Azerbaijan and the UAE.

With over 11,000 flying hours, and counting, we have set world records telling stories to many millions of people globally.