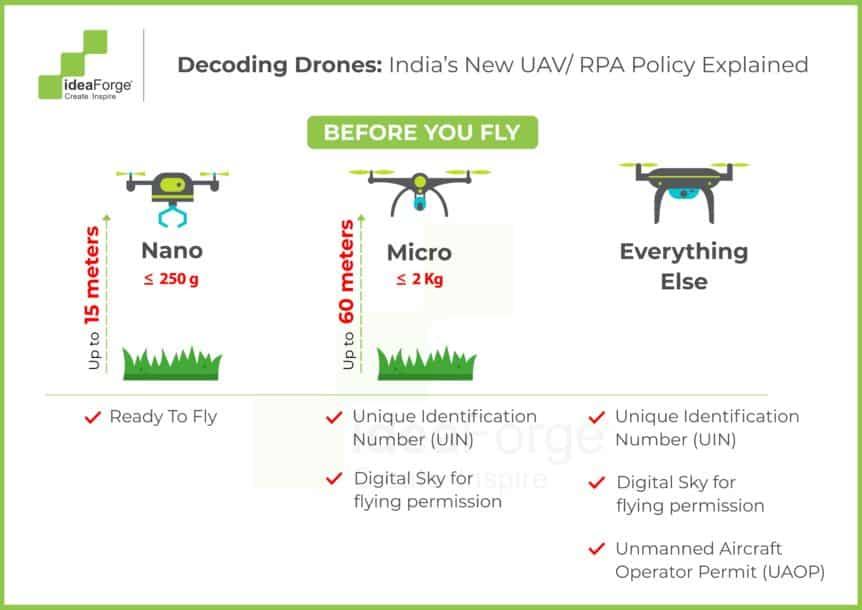 Has the government finally cracked the code on regulatingemerging technology? The Drone Rules 2021 display maturity and awillingness to receive and act on feedback from the government. Inthis blogpost, we discuss how the Drone Rules are an example of aforward thinking and permissive regime that could be a model forother emerging technology regulations.

In August 2021, the civil aviation ministry notified the Drones Rules 2021 (DroneRules).These rules completely overhaul an earlieriteration of regulations released only in March, 2021. The March draft had been seriously criticisedby the industry for being overly restrictive. But in the 6 monthsbetween the two versions, the ministry displayed a commendablewillingness to respond positively and swiftly to industry feedback.The rules are an example of a progressive regime for the regulationof technology. The ministry's approach to drafting the rulesshould be a model to follow for regulating emerging technology inIndia.

The Drone Rules are intended to be permissive and liberal,making it easier for users to own and operate drones. The ministryhas taken the ease of doing business into consideration, reducingthe number of clearances required, creating a single-portalregistration process and simplifying the requirements forregistration of drones. The mechanism set up also reduces thenumber of regulators that the operator has to deal with andminimises delays due to inter-agency coordination. The interventionmade by the rules is risk-weighted rather than all-encompassing.Smaller drones, called nano-drones, which are mostly usedrecreationally, cannot fly very high or far, nor carry largepayloads, have been exempted from almost all compliancerequirements under the regulations. This is because nano-drones donot pose significant security or safety risk.

The ministry has introduced accountability measures forgovernment agencies in the Drone Rules, signalling their intent toensure predictability in licensing and implementation forbusinesses. The rules have imposed deadlines for the government torelease enabling policy and tools, with the government meeting allof the deadlines that have occurred so far. The Drone Rules alsointroduce strict deadlines for registering operators once they havesubmitted necessary paperwork. The Drone Rules allow the QualityCouncil of India to delegate parts of its quality assurancefunctions under the rules, to authorised organisations. This is apragmatic acknowledgement by the government that there is limitedbandwidth (and, limited regulatory capacity, when it comes tonew-technology) in government institutions, and that it is wise insuch cases to outsource functions to ensure smooth processing ofapplications.

The ministry has charted a course that encourages indigenousmanufacturing and commerce without being protectionist. Unlikeprevious drafts, the Drone Rules allow foreign corporations to ownand operate drones. Import has also been made easier, with theresponsibility for regulation delegated to only the foreign traderegulator, removing the requirement for approval from the aviationregulator as mandated in previous drafts. The Drone Rules set up aprocess that allows the recognition of foreign quality standardsfor drones, thus lowering the barriers for the import of drones. Atthe same time, the ministry is encouraging indigenous developmentthrough certification standards.

The Drone Rules suggest the establishment of a promotion councilwhich will involve industry experts in creation of policy. Theseelements signal the intent of the government to iterativelycontinue improving the policy and ensuring it stays current withdevelopments in the industry.

A significant barrier to implementation of previous drafts ofthe regulations was the requirement of safety related hardware andsoftware that the regulations imposed for drones imported ormanufactured in India. Many of these requirements were widelyconsidered unrealistic and impractical with the state of technologyat the time. The ministry has omitted most of these requirements inthe Drone Rules in response to the feedback from the industry. TheDrone Rules note that in the future, drones may be required to havecertain safety features and outline the nature of features that maybe mandated. Thus, rather than stall the entire process ofauthorising civilian drones, the ministry has smartly giventhemselves and the industry more time to come up with creativesolutions for the abovementioned issues. The industry can continueto consult with the ministry on the safety features that can beincluded in future regulations while being able to begin droneoperations with technologically feasible regulations.

Lessons to be learnt from the drone regulations

What lessons does the story of the evolution of the drone ruleshold for regulating emerging technologies generally? Technologyregulation should be iterative, and regulators should not attemptto make regulations that can be in place for decades to come. Theaviation ministry has been open in admitting that the Drone Ruleswill continue to be a work in progress and will be improved astechnological advancements occur, a refreshing approach fromregulators in the space. Further, technology regulation should, inacknowledgement of the limitations of state capacity, provide forindustry participation in policy making and resort to delegation offunctions to authorised organisations that can supplement theregulator's bandwidth and technical capability.

Above all, the Drone Rules show the ability of the regulator tobe adaptable and, accept and incorporate feedback from theindustry. The ministry has ensured that the rules cater to theneeds of businesses, making regulations easier to comply with,imposing accountability on government institutions, ensuring thatrules are not overly protectionist in nature and that they areiterative and progressive.The Drone Rules have the potentialto be a standard for future regulation for emerging technology.

The content of this article is intended to provide a generalguide to the subject matter. Specialist advice should be soughtabout your specific circumstances.

Tags:  are drones allowed in india