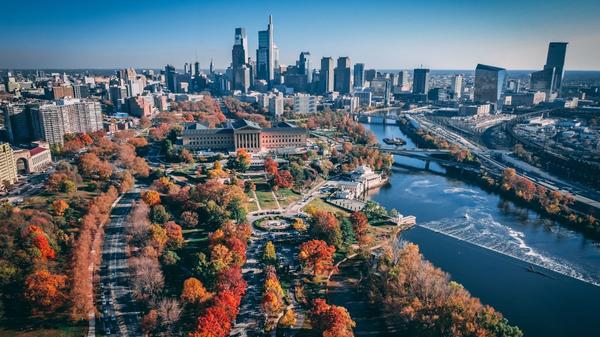 Planning your next holiday? Our guide to the best cities for flying a drone could help you pick your next destination, as all of these locations combine plenty of drone-friendly areas with photographic views. They're ideal spots if you've got one of the best drones packed in your holiday bag and want to make good use of it.

All locations discussed in this article are in unrestricted Class G airspace unless otherwise noted. This means drone enthusiasts can operate their drones without obtaining special permission — but do be aware that you'll still have to abide by normal drone regulations.

Looking for more drone guides? We also have articles on drone photography tips and tricks, along with an article on drone racing: everything you need to know. But if it's drone-friendly cities you're interested in, then read on.

Best cities for flying a drone

This former American capital has plenty to see. Start off in Fairmount Park (part of which is shown above); a swathe of protected greenery split in two by the Schuylkill River. Follow the river south; just past the Please Touch Museum there is a sprawling complex of statues and monuments ripe for drone photography.

Further south along the river, but still in Fairmount Park, is the Philadelphia Museum of Art, made famous by the iconic “steps” scene in Rocky. Linger over the well manicured grounds and intriguing architecture before leaving the Park by the southern end. You can take Vine Street east towards the Benjamin Franklin Bridge; the historic suspension bridge connects Philadelphia with Camden, New Jersey. Technically you can keep your drone in flight as you walk along Vine Street (it is Class G Airspace), but you need to adhere to FAA’s Operations Over People Rule which means avoiding flying over any large group or assemblage of people.

It may be worth it to just land your drone once you leave Fairmount Park and launch again near the Bridge. Shooting this landmark (especially at sunset) affords you stunning views not only of the bridge itself, but also gorgeous shots of the classic Philly skyline. Just remember to check your B4UFLY app before takeoff at the bridge to ensure that there are no temporary advisories about flying around this landmark.

All the best drone accessible spots in this city seem to involve river views. Located on the Allegheny River, Millvale Riverfront Park is a 1.7-mile strip of greenery that is perfect for flying drones and capturing images of the Washington Crossing Bridge. Similarly, the Southside Riverfront Park along the Monongahela is one of the oldest parks in Pittsburgh; it affords drone pilots views of the Three Rivers Heritage Trail system and the Birmingham Bridge.

For something a little different, though, head across the Ohio River to Mount Washington and visit Point of View Park. This location features stunning and panoramic views of the city (shown above), its skyline, and its river system that simply cannot be beat. But don’t just look out across the river, make sure to get some shots of the Point of View bronze sculpture depicting George Washington meeting with Seneca leader Guyasuta and the funicular that leads up the side of Mount Washington.

For this Midwestern metropolitan area start in the north and work your way south, but (depending on the time of day) there is nothing wrong with reversing this order.

Begin at Montrose Avenue Beach near the Uptown neighborhood; its wide-open spaces and shorelines make for great drone footage. Be mindful of the seasons, however, as Montrose is a migratory bird sanctuary which means competition for airspace gets tough during certain times of the year. From here move south to the famous Chicago Riverwalk. Located on the southern bank of the Chicago River, the Riverwalk provides stunning views of downtown Chicago instantly recognizable from countless Hollywood movies.

The next stop is Grant Park located in the central business district. While the sweeping views of Lake Michigan are impressive, don’t forget the Buckingham Fountain, one of the largest fountains in the world. The fountain is only operational from 8:00 am to 11:00 pm May through October, but even when dry, it still offers a model to excite any drone photographer.

We end at Promontory Point -- a man-made peninsula constructed of limestone. This 12-acre park provides expansive views of the Chicago skyline alongside ample flying room to avoid tourists and other drones.

A picturesque coastal community adjacent to Acadia National Park may seem out of place on this list, but its combination of small town charm and natural appeal make it perfect for drone enthusiasts. Unfortunately drones are not allowed inside the park due to National Park Service rules, but there are a number of park-adjacent locations nearby where the drone can fly and capture photos of the natural landscape.

As for the town itself, it is a quaint collection of shops and restaurants. At low tide you can take your drone over the Bar Island Land Bridge; this unusual land structure connects the town to Bar Island, which offers some lovely vistas of the town and the coastline. Just be mindful of surroundings, after high tide you may be stuck on the island longer than you intended!

The most populous city in the Lone Star State, Houston offers a surprising patchwork of drone-friendly areas. Due to city ordinances, however, you can only fly drones during daylight hours.

You’ll find the Kemah Boardwalk in southern Houston along the shores of Galveston Bay. Spread out over 60 acres and filled with eye-catching attractions, it bills itself as one of the most popular boardwalks in the country. This makes it a hot spot for drone flying -- make sure to not only observe the FAA’s rules about flying above people, but keep an eye on drone traffic as well.

Next up is a trip to the Houston Zoo. Spanning 55 acres, the zoo houses over 6,000 animals from over 900 species. Unlike other zoos in the country, you can actually fly a drone over the park itself (albeit at an altitude of no lower than 50 feet). The zoo is in controlled airspace, however, so make sure you get LAANC authorization on your B4UFLY app before sending up your drone.

For those craving shots of inviting architecture make sure to visit the Museum District, a collection of museums, sculptures, and memorials laid out over a 1.5 mile greenspace in Hermann Park.

Worst city for flying a drone

Washington, DC is dotted with landmarks and buildings that are literally recognized around the world. It’s tempting to try and get a few shots of its unique combination of architecture with its world-renowned monuments and memorials. Unfortunately you cannot. All drone flights are prohibited within a 30-mile radius of Washington’s main airport which, in effect, rules out all recreational drone flights anywhere in the national capital area. Even if you’re tempted to push the limits and risk sneaking in one quick flight, we recommend against it. Among other distinctions, Washington has the greatest concentration of law enforcement and security agencies in the country -- which includes fierce monitoring of all airborne activity. This is one vacation where it is better to leave the drone at home.

Wherever you fly your drone, always err on the side of caution: check all local regulations and consult your B4UFLY app before launching. The goal is to have fun and come away with astounding pictures to impress and delight.

Tags:  can you fly drones in cities