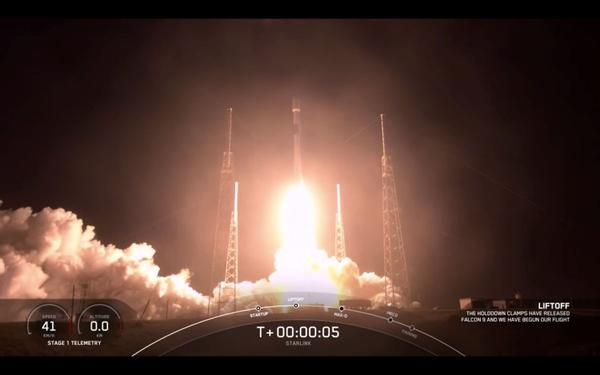 CAPE CANAVERAL, Fla. — A SpaceX Falcon 9 rocket lit up the predawn sky early this morning (March 11) as it carried a new batch of 60 Starlink internet satellites into orbit, before nailing its landing on a floating platform at sea.

The two-stage Falcon 9 booster lifted off from Space Launch Complex 40 here at Cape Canaveral Space Force Station at 3:13 a.m. EST (0813 GMT). About 8.5 minutes later, the rocket's reusable first stage returned to Earth for its sixth landing, touching down on one of SpaceX's drone ships. The floating platform, called "Just Read the Instructions," was stationed out in the Atlantic Ocean, about 400 miles (630 kilometers) downrange.

It was a clear night in Florida for the mission's second attempt. The launch was originally planned to occur on Tuesday night (March 9) but was pushed back so SpaceX could conduct more prelaunch checkouts. Weather forecasters at the U.S. Space Force's 45th Weather Squadron predicted a 90% chance of favorable conditions for launch this morning, and Mother Nature delivered.

This latest liftoff marked SpaceX's seventh mission of 2021 and the company's 21st 60-satellite Starlink launch overall. It starred one of the better known Falcon 9 first stages in the fleet — B1058.

Emblazoned with a now-sooty NASA worm logo, B1058 is the booster that delivered two NASA astronauts to the International Space Station (ISS) in May of last year, returning orbital human spaceflight to U.S. soil with SpaceX's Demo-2 mission.

The veteran launcher also delivered a cargo Dragon spacecraft to the ISS, a communications satellite for South Korea's military and the most satellites ever launched on a single mission (Transporter-1). Today, B1058 carried its second stack of Starlink satellites.

The predawn spectacle marked the 110th overall flight of a Falcon 9 rocket and the 56th reflight of a Falcon 9 first stage. It was the sixth mission for this particular booster, and SpaceX set a new record for fastest turnaround time for a rocket with this many flights under its belt.

B1058 last flew on Jan. 24, and it blasted off again from the same launch pad this morning, just 45 days later; the previous record for such a veteran booster was 59 days.

SpaceX relies heavily on its fleet of veteran rockets, which have enabled the company to keep up with its launch ambitions. However, SpaceX has always stressed that, while booster recovery is beneficial, the main goal of each mission is to successfully deliver the payload to space.

The company recovered a first stage for the first time in 2015, when a Falcon 9 booster touched down on terra firma at one of the company's Florida landing pads. Ever since, SpaceX has been striving to better understand the recovery process and how much wear and tear each launch puts on the rocket.

With each recovery attempt, the company has been able to refine its process and reduce times between flights. SpaceX founder and CEO Elon Musk has said that his long-term vision involves rockets that resemble airplanes, in the sense that they lift off, land, refuel and lift off again in short order.

Musk has said, for example, that a goal of SpaceX is to launch, land, and then launch and land the same rocket again within 24 hours — a milestone that has not yet been reached.

While SpaceX makes landing rockets look easy, a recent anomaly shows that it's not always a slam dunk. On Feb. 15, the company broke a 24-booster recovery streak when a Falcon 9 first stage, designated B1059, failed to land on a drone ship in the Atlantic Ocean after launching a different batch of Starlink satellites into orbit.

The mishap was attributed to "heat damage," with company officials elaborating on that during a recent teleconference. Benji Reed, SpaceX's senior director for human spaceflight, said that one of the booster's protective engine covers failed, allowing hot gases from the engine to leak into places it wasn't supposed to, causing an engine to shut down during flight. This shutdown ultimately caused the rocket to miss its mark on the drone ship.

Related: See the evolution of SpaceX's rockets in pictures

SpaceX upgraded its Falcon 9 rocket back in 2018, giving the vehicle a series of enhancements, including a more robust thermal protection system, titanium grid fins and a more durable interstage, to facilitate reuse. The upgrades enabled the rocket to refly multiple times with few refurbishments in between.

The company said that the Falcon 9 we see today could be capable of flying a minimum of 10 times with little to no refurbishment between flights and as many as 100 times overall before retirement. But such numbers may not be set in stone. Instead, those targets could be more of a guideline that changes as the company refines its refurbishment process.

SpaceX has two boosters that are close to the 10-mission milestone, having flown a record eight times, and it's possible we could see one or both of those hit double digits this year. The company has big ambitions for 2021, with a goal of launching a total of 40 missions from its California and Florida launch pads.

This morning's mission marked the 76th SpaceX booster landing to date, and the 19th for "Just Read the Instructions."

To recover its returning boosters, SpaceX uses two massive floating landing platforms — "Of Course I Still Love You" and "Just Read the Instructions" — in addition to its landing pads, which allow the company to launch and land more rockets. Typically, the drone ships see most of the action, as it takes more fuel reserves to make it all the way back to land than it does to come down at sea.

"Just Read the Instructions" is the newer of the two ships. Originally stationed out in California, the ship was moved to the East Coast in 2020, to help with the increased launch cadence.

SpaceX has been planning a third drone ship for some time now, and it's possible that ship would service the West Coast as the company aims to increase launches from its facilities at Vandenberg Air Force Base in California. There is no expected completion date on the third ship, but a recent company job opening for a drone ship recovery engineer suggests it could be sometime in the near future.

With this morning's successful liftoff, SpaceX has now launched more than 1,200 Starlink satellites into orbit, including some that are no longer operational. The company has planned for its initial Starlink constellation to be 1,440 strong but has sought approval for tens of thousands more. There are many more launches coming as SpaceX fills out this growing megaconstellation.

The company launched its Starlink program with one major goal: to connect the globe. To that end, SpaceX designed a fleet of flat-paneled broadband satellites that fly over Earth, providing internet coverage to users around the world.

SpaceX recently started taking preorders for its public rollout. Potential users could sign up for the service via a website, pay a deposit and then be notified when coverage is offered in their area.

The rollout is on a first-come, first-serve basis while the company is conducting an extensive international and domestic beta-testing phase. In advance of this launch, SpaceX rolled out service to Germany and New Zealand and is working to expand its existing service in the United Kingdom.

But that's not all. Recent filings indicate that the company is seeking permission to expand its services to moving vehicles, including planes, boats and RVs. According to Musk, the current Starlink user terminals, which facilitate access to the satellites overhead, are too large to put in cars, so for now, it's targeting bigger vehicles.

The two boats received upgrades that allow them to scoop fairing pieces out of the water. The payload fairing is a clamshell-like piece of hardware designed to protect satellites as their rocket travels through the atmosphere. SpaceX fairings are composed of two halves. At a designated point after launch, the two pieces jettison and fall back to Earth.

Historically, the payload fairing has been a one-and-done piece of hardware, discarded in the ocean after each mission. But SpaceX has been working to expand its reusability efforts and has had success recovering and reflying fairing pieces.

For this mission, the active fairing (the half that has the motors that jettison it from the rocket) has flown once before, and the passive (or other half) has flown twice before. Once recovered from the ocean, SpaceX inspects and refurbishes each fairing piece.

Up next for SpaceX is another Starlink mission, which could launch as soon as this weekend. The company is also preparing for its next astronaut mission, Crew-2, which is scheduled to launch from NASA's Kennedy Space Center in Florida no earlier than April 22.