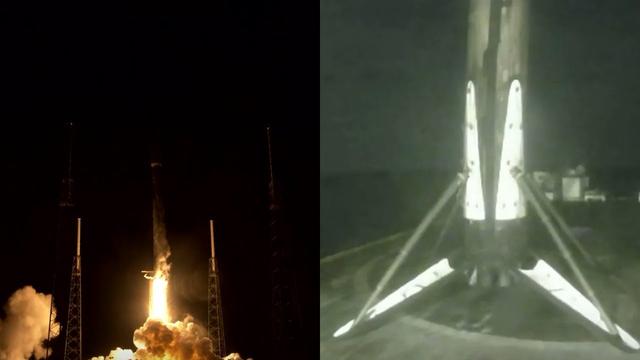 SpaceX has successfully completed its first launch – a Starlink mission – of 2022, kicking off the most ambitious annual launch manifest in the company’s history and marking the world’s first orbital launch of the year.

Right on schedule, thrice-flown Falcon 9 booster B1062 lifted off on its fourth orbital class mission at 4:49 pm EST, precluding the need for a backup window scheduled a few hours later. Carrying a fully-fueled Falcon upper stage and 49 Starlink V1.5 satellites, together weighing around 130 metric tons (~285,000 lb), the booster separated approximately 68 kilometers (42 mi) above the ground while traveling 2.2 kilometers per second (~1.4 mi/s or Mach 6.4) – about 30% of the way to orbital velocity.

Starlink 4-5 was the first time SpaceX has performed a southerly Starlink launch from the East Coast, sacrificing the addition of four Starlink satellites to ensure better booster and fairing recovery conditions by landing near the Bahamas instead of a rougher, more wintry section of the Atlantic Ocean to the north. It might not be a coincidence that SpaceX nearly lost a brand new Falcon 9 booster to poor sea conditions after its last launch of 2021.

As B1069’s near-catastrophic first recovery made clear, Falcon 9 B1062 – despite having successfully landed for the fourth time – is not out of the woods yet and must still be safely secured by drone ship ASOG’s ‘Octagrabber’ robot – effectively a remote-controlled tank that uses hold-down clamps and its own weight to stabilize recovered Falcons. With any luck, this Octagrabber will have a better experience than its sibling on Just Read The Instructions (JRTI), which suffered significant damage while attempting to grab B1069.

SpaceX will need to quickly repair JRTI’s Octagrabber if it hopes to complete as many as four more East Coast Falcon 9 launches planned for the rest of January – let alone the record-breaking 40 to 60 Falcon launches potentially penciled in on the company’s full 2022 manifest. Barring a surprise Starlink launch in the interim, SpaceX’s next launch – the third Transporter rideshare mission – is scheduled no earlier than (NET) January 13th.

SpaceX kicks off jam-packed new year with Starlink launch and Falcon landing
Comments
Tags:  how to jam a drone