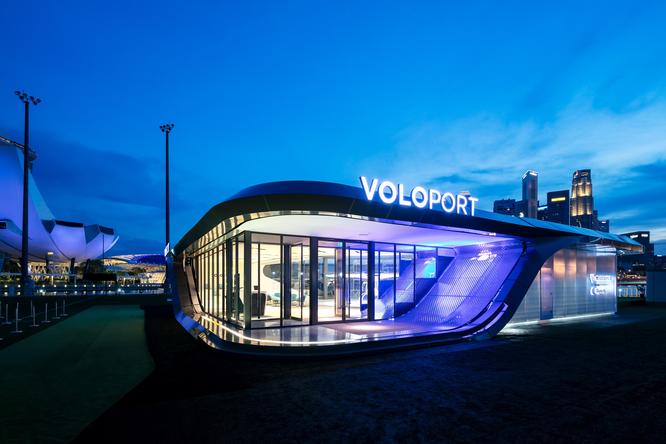 UK drone delivery and urban air mobility (UAM) infrastructure company Skyports has used creative ways to secure work from clients to design and develop future electric takeoff and landing (eVTOL) air taxi vertiports. Now it has tried an inside-the-box method it hadn’t before: buying an existing helicopter terminal to repurpose for itself.

Skyports says it acquired the east London facility formerly known as Falcon Heliport for an undisclosed amount, and has renamed it Skyports London Heliport. Located just minutes away from the capital’s Canary Wharf financial district, the terminal is only one of two heliports in London – but will doubtless be among the city’s many future vertiports servicing eVTOL air taxis and other UAM vehicles. Awaiting those futuristic aircraft and services, the company plans on letting choppers continue to haunt the premises for a few more years.

Skyports has kept busy over the past two years wooing clients for the design, construction, and operation of eVTOL air taxi vertiports. Its manner of setting those facilities up has varied greatly. In Japan the company won a bid to construct an entirely new UAM transport hub in Osaka, and in Malaysia sealed a contract alongside Volocopter to create new vertiport areas within the country’s existing Sultan Abdul Aziz Shah Airport.

In November, Skyports struck a deal with the giant LAZ Parking group to repurpose appropriate spaces of its multi-story garages for eVTOL air taxi use in the Los Angeles area. Later that month, it got the nod from regional and municipal organizations around Paris to transform a small suburban airport into Europe’s first operating eVTOL vertiport – a trial facility anticipating air taxi services officials hope to launch during the 2024 Paris Summer Olympics.

So much for one development size fitting all projects.

Purchase of the London heliport marks yet another business tack. It’s also a significant step in Skyports’ plans to stake out locations for creating and managing eVTOL air taxi vertiports in its home city, and across the UK. The company says its new property will allow UAM operators reach to all London area airports in 20 minutes, and even fly to other cities like Bristol in less than an hour.

Skyports believes those aerial activities are likely to be introduced within the next few years, during which time its new vertiport will continue functioning as a heliport. By mid-decade, it says, testing already underway for its use by eVTOL vehicles will make way for full-on structural adaptations and equipment updates to allow those craft to use the facility.

“The acquisition demonstrates our ambition to deliver a network of operational landing sites for eVTOLs and our commitment to making the UK a leader in decarbonization of domestic aviation,” said Damian Kysely, Skyports’ head of Europe and Middle East. “The heliport also provides us with an important live operating environment in which we can safely develop and test our vertiport systems, collect operational data, and mature our vertiport technologies.”

When it hasn’t been drumming up UAM infrastructure work, Skyports has expanded its drone delivery services and UAV medical transportation operations across the UK and Europe. In September the company received authorization from Irish authorities to fly beyond visual line of sight missions whenever it deemed necessary – a green light from one European Union regulator that is automatically applicable in all other member nations.

Tags:  where can i fly a drone uk