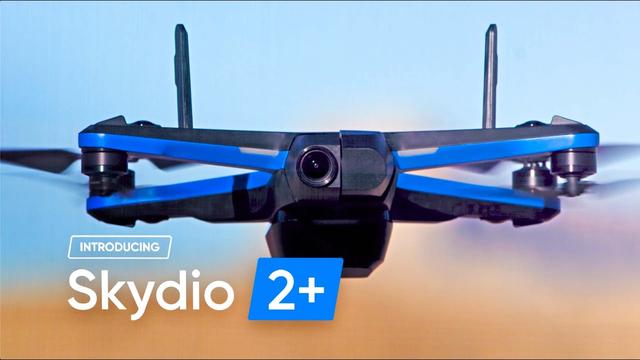 Skydio, the US company building self-flying, obstacle-dodging drones that a three-year-old can pilot without fear, is making two announcements today during CES 2022. One of them is an expensive fix for the Skydio 2’s single biggest shortcoming — the other, a totally free update that adds one of the most exciting features yet.

First, the Skydio 2 Plus. At $1,099 and up, the new drone promises the kind of long-range, robust connection that the original Skydio 2 was missing, thanks to a new high-power 5GHz Wi-Fi radio and a pair of pop-up antennas. The company now claims you’ll see 3 kilometers of range from a new optional Skydio 2 Plus Beacon controller — twice as much as with the original Skydio 2 and Beacon — and 6 kilometers of range if you’re using the optional twin-stick Skydio Controller, up from 3.5km originally.

It’s also got nearly 20 percent more battery, thanks to a higher-density pack with a slightly stronger magnet. Skydio says its maximum flight time is 27 minutes, up from 24 previously, and you can use the new battery packs on the old Skydio 2 if you want.

As far as hardware updates go, radios and batteries are it — the Skydio 2 Plus has the same airframe, the same cameras, and the same computing inside as the original Skydio 2, and Skydio CEO Adam Bry tells us it will replace the Skydio 2 entirely from here on out. Good news for new buyers, not quite as nice for existing owners, yeah?

But both Skydio 2 and Skydio 2 Plus owners will soon have a brand-new feature in common, one that won’t cost an additional cent: a new mode called KeyFrame, which unlocks one of the most impressive concepts for drone cinematography I’ve seen since Skydio first made follow-me drone footage a reality.

If you’re a video editor, you don’t need me to tell you how keyframes work — you’ve likely already worked out what Skydio intends to do from the name alone. But for those who are unfamiliar, “keyframes” are the key moments in any animation or movement that define how that motion will look when you play it back — what it looks like at the beginning, at the end, and at various points in the middle.

But with Skydio’s self-flying drone, you don’t need to sketch or photograph those still frames, of course. You simply fly there. You fly the drone to a point in 3D space, press a button when the drone’s camera is lined up with what you want to see in the video, then fly to the next, virtually storyboarding your shot with every press.

Then you pick how fast you want the drone to fly, hit play, and — I’m not exaggerating here — the drone does all the rest. It automatically plots a route to fly between your keyframes all by itself, hitting each one in turn, while using Skydio’s six-camera obstacle avoidance system to dodge any obstacles on the way. It automatically performs smooth camera motions in the air, filming the whole time at your resolution and frame rate of choice. When Skydio’s CEO first showed it to me, the phrase that flashed to my mind was “realtor mode” — you could theoretically use this to easily showcase beautiful swooping views of a property, without any experience as a cinematographer or drone pilot. Here’s Skydio’s own example of that.

As I soon found out when testing, the reality isn’t quite as simple as I imagined — it’s still a skill to learn, and while you may not have to worry about the Skydio crashing into obstacles, they can definitely still mess up your shots, forcing the drone to dodge in ways you can’t anticipate.

I spent my first set of batteries trying to get a beautiful one-shot overview of my own home, but I had to scrap almost every attempt because the drone dodged a branch awkwardly here or strayed into my neighbor’s yard over there, even if it didn’t do it the take before. (Bry tells me there are currently no plans to bring geofencing to the company’s consumer drones quite yet.) I don’t have a mansion with sprawling open grounds to film, I’m afraid — I’ve got a normal home with overhanging trees and a fence.

When I took KeyFrame to a park with freshly recharged batteries, I had a better time — at least after I realized I needed to chase after the drone a bit to keep it within the original Skydio 2’s Wi-Fi range. I got a really cool shot of an empty playground that’d be a lot of fun for my kids, and you can watch it above. (If you see any choppiness, that’s probably YouTube’s fault, the original shot is crisp.)But it still took six takes to figure out a speed slow enough that the drone would get steady footage, yet fast enough it wouldn’t be a bore.

It also seems the only way to change the flight path is to add a new keyframe or subtract an existing one and let it calculate its route again — and adding a new keyframe changes the entire flight path, not just a small portion. It’s a lot of trial and error, and it’s particularly annoying that the Skydio app disappears your keyframes after a battery swap. Skydio spokesperson Morgan Mason reached out after we published this story to explain a hidden experimental way to retrieve them, though:

I don’t mean to damn KeyFrame with faint praise. When I finished draining that second set of batteries, I didn’t want to stop; I wanted to learn the skill. Today’s drone cinematographers are incredible multitaskers, ones who typically have to fly a drone and aim its camera simultaneously, all while intuiting how not to crash into obstacles they can’t necessarily see — they need to meticulously plan their routes and/or wind up with a pile of scrap afterwards. I don’t have either of those luxuries, but an autonomous skill like KeyFrame means I don’t necessarily need to. As long as you’re happy with Skydio’s piloting, you don’t necessarily have to worry about the flying part at all — just the part where you’re getting the shot you want and need.

Like with the Skydio 3D Scan software I tried last summer, or its autonomy engine in general, it continues to be amazing that a drone can fly and film things all by itself. Limitations abound, but we’re within spitting distance of something that used to feature in barely plausible science fiction movies.

Bry tells me Skydio has grown during the pandemic. The company has 400 people now, and it’s still tweaking its basic autonomy algorithms that underpin both the Skydio 2 and its Skydio X2 military and enterprise drone to detect new things like water and sky. The drone sees water as a “less trustworthy” reference point for visual navigation, and uses the lack of sky to know that it’s flying indoors and should adjust its speed and distance appropriately.

The other thing Skydio is announcing today is a new insurance program for its drones called Skydio Care, which may come as a bit of a surprise for people who bought into the idea of a drone that doesn’t crash — but as we discussed during our review, Skydio had already specified a bunch of circumstances under which its “repair or replace for free” warranty wouldn’t apply, including flying around thin branches, netting, chain link fence, windows, mirrors, or trying to land directly above an obstacle (where Skydio still weirdly turns off its obstacle avoidance systems and will happily land on the edge of a roof or table before plummeting to its doom if you’re careless enough to let it).

Now, the standard 12-month warranty will only cover hardware failures and malfunctions, while a new $149 Skydio Care plan will let you swap your broken drone “no matter the reason” for a flat fee of $150 with no questions asked. “This isn’t intended to cover people taking their drone into their backyard and setting fire to it,” Bry clarifies when I ask. A second drone replacement costs $200, and you pay $550 if you lose your drone entirely. There’s also a $249 Skydio Care plan that extends those coverages to two years instead of one.

Bry still isn’t talking about future hardware possibilities, like whether Skydio will build mini drones or foldable drones like his competitors at DJI, or even whether it’ll replace the rebranded Parrot controller that it sells for the Skydio 2 with something more comfortable and robust. However, you can at least pair a Skydio 2 or 2 Plus with the nicer enterprise controller that ships with the Skydio X2, assuming you can acquire one somehow. Bry originally told me that wasn’t yet possible, but the company reached out after I published this story to say that it’s totally a thing now.

The new Skydio 2 Plus and its accessories are now on sale right here. Note that at $1,099, you’re still limited to the very poor ranges of your phone as the controller: the new $219 Beacon and old $179 joystick controller cost extra, though both are included in Skydio’s $1,949 and $2,169 extensive combo kits.

Correction, 2:57 PM ET: Though Skydio initially confirmed that keyframes are lost between battery charges and that the Skydio X2 Enterprise Controller can’t pair with a Skydio 2, it reached out after publication to tell us those things are no longer technically true.

Tags:  how to build a long range drone