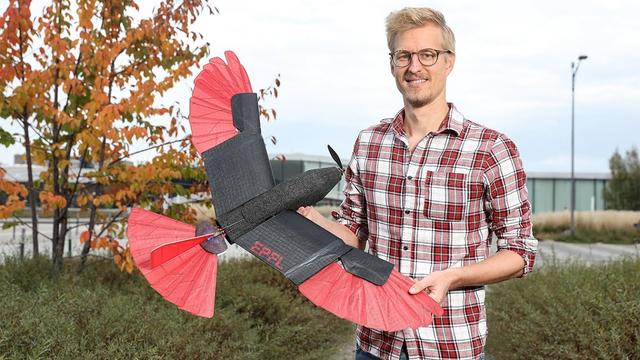 “What on Earth is going on here?” asked New Atlas. Calling it “avant-garde absurdity,” New Atlas said it was “unlike anything we’ve seen before—or are likely to see again, if we’re honest.”

In an email to FLYING, an engineer behind Macobat answered several questions surrounding the concept’s technology and financing approach.

“It can carry one person with some goods or just goods. It will have to be remotely piloted. No pilot on board,” Phractyl said on Twitter.

The concept, according to the company, reflects the need to reach remote areas without roads, airports, or developed landing strips.

It would have the “ability to takeoff and land in any terrain [no need for vertiports],” the company tweeted.

Its electric propulsion system would be “eco-friendly,” Phractyl said. But the company has not offered any details about how the aircraft’s electricity would be generated.

“With its substantial payload and range capability, books and other educational supplies can now be easily transported with Macrobat to schools located in rural areas,” tweeted Phractyl.

It has no wheels, but it does have what resemble mechanical bird legs. Those legs would need “some pretty strong motors at their hip, knee and ankle joints,” New Atlas wrote. The process of landing and the forward momentum that would create “sounds to us like a recipe for an expensive faceplant.”

When asked via email for details about the gear design, Phractyl engineer Vivek Singh would only say: “We do not consider implementing this design insurmountable, especially because properties like mass and balance ranges are well known for aircraft.”

In offering a bit of insight into the unorthodox design, he said: “We are aiming to address a number of mobility requirements …We have a personal interest to explore a potential solution that does not exist at present, thereby enabling significant societal benefit.”

Singh also said the “endeavor is a much bigger project than just the aircraft itself.” It includes “a very large emphasis on socio-economic development, community involvement, and ultimately, the spirit of Ubuntu [humanity]. We believe that it is possible to use technology development to provide a platform for doing things differently. It’s no longer about conducting business as usual, it’s about constructing business unusually.”

Its “pivotal” flapping wing design, according to Phractyl’s website, prompted the company to invent a new aviation acronym: EnVTOL—electric near-vertical takeoff and landing.

The wing, Phractyl’s site said, is “capable of flying over Mordor unscathed,” which appears to be a random reference to The Lord of the Rings series of fantasy novels. In fact, much of Phractyl’s website is written in a light-hearted, fanciful style, which is atypical of most serious aviation startups.

Inventors have been trying to develop successful flapping-wing designs for more than a century.

More recently, a bird-wing airplane meme has made the rounds.

However, scientists have been working to develop small, lightweight drones with wings that move somewhat like a bird’s. But the possibility of scaling up this kind of technology for passenger and cargo platforms seems unlikely anytime soon.

Phractyl said its wing design has already been undergoing testing. “We started by running some simulations to predict the aerodynamic performance of the wing,” its website said. “Next, a scaled prototype of the wing was built and experimentally tested, which confirmed the results obtained in the simulation environment.”

The idea for Macrobat was born during a meeting between Singh and two other engineers—Coert Visser and Prevani Kistan-Naidoo—in a bar.

Uber Elevate co-founder and Whisper Aero CEO Mark Moore said he knows what it feels like when a design provokes skepticism. Moore led development of NASA’s Puffin eVTOL technology demonstrator more than a decade ago.

“When I look at [Macrobat], it gets me thinking about those Puffin days when so many people told me that I was crazy, yet I knew what the technology was going to enable,” Moore told FLYING. “The technology that my teams developed was the foundation for urban air mobility, eVTOLs and what’s going on across electric aircraft.”

In general, Moore said a design concept may be unusual or even fatally flawed but it doesn’t necessarily have to fly or go to market to be successful. Flawed designs can give birth to concepts or technological iterations that might bear fruit later on.

Funding obviously can mean the difference between success and failure because developing new aircraft from unproven designs is expensive, requiring enormous resources and years of work.

Several major players such as Joby Aviation, Archer Aviation, Lilium, and most recently Vertical Aerospace have merged their private companies with SPACs.

Perhaps not surprisingly, Phractyl isn’t planning to go that route. Currently, Phractyl is offering visitors to its website the opportunity to “donate,” via Patreon or Paypal.

“This project is self funded at present, and we are actively seeking funding opportunities,” Singh told FLYING. “The distinct drivers, such as full-scale development, certification, and production, encompass a great number of considerations from a financial perspective, for a significant undertaking such as this development. As a result, we only share detailed financial projections with prospective investors.”

It’s worth noting that privately funded aviation projects typically don’t have the burden of sharing their financial information publicly.

Singh said Phractyl is planning for “a seven-year development cycle,” including “a number of demonstrators.” The company said it’s “currently working towards a scaled prototype … to test a number of high-level system functions. We expect to arrive at a full-scale engineering prototype, four years down the development cycle.”

“The aircraft is planned to start entering service in year eight,” Singh said.

He acknowledged “a number of unknowns” regarding certification, which the company suggests may delay the project.

“We think it unwise to venture into predicting an exact timeline for this process at this stage.”