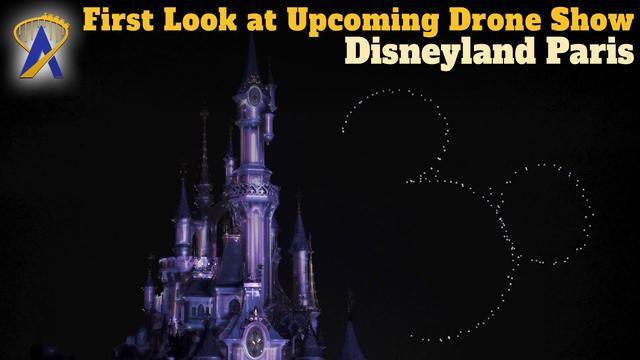 The honor of hosting the first-ever drone show performed in a Walt Disney Company theme park will go to France this March, when Disneyland Paris celebrates its 30th anniversary.

Disneyland Paris said the unprecedented drone show would be part of its wider nightly Disney D-Light performances marking the venue’s third decade of operation. The specially conceived spectacle will feature 200 UAVs illuminating the sky around Sleeping Beauty’s Castle, along with video projections, water jets, lighting effects, and both existing and newly composed Disney music. The nightly display will begin March 6, and serve to bring down the curtain for the day ahead of the park’s closing.

Overseeing the first drone show to join the Disneyland array of entertainment is Dronisos, a French UAV performance company that says it has more than 40,000 indoor and outdoor aerial events to its record. To prepare its choreographed displays for Disneyland Paris, the company has been hunkered down near its Bordeaux headquarters, where fine-tuning of its flights has been kept away from eyes too impatient to wait for the March 6 anniversary date.

Thanks to a video Disneyland Paris released Tuesday, however, some detail about what visitors will see is known.

For starters, the UAVs will come together to create a large “30” in recognition of the milestone – using rounded shapes to resemble Mickey Mouse’s head and ears as they do. According to Disneyland officials working on the event, drones in the show will also hover around the castle to evoke pixie dust, and ultimately create “a roof of light” before giving way to the other effects in the rest of the immersive Disney D-Light performance.

As is always the case in the company’s international parks, performance of Disneyland Paris’ drone show and other D-Light attractions will depend on weather conditions.

Reaching its big 3-0 was far from a given when Disney’s Paris park opened in 1992. At a time when many in France were still denouncing “American cultural imperialism,” the facility in an eastern Paris suburb was regarded with hostility by some. Many sneering pundits predicted it would prove the most spectacular failure in the company’s history.

While Disneyland Paris has faced its share of serious challenges – from financial woes to the current COVID-19 pandemic – it continued drawing people from France, Europe, and around the world to make it to its fourth decade. Today the park boasts 375 million visitors to its record, and employs 16,000 people.

The addition of drones to their magic of its kingdom is only one way Disneyland Paris officials are seeking to make the anniversary special. Music for the spectacle was recorded by 60 musicians in London’s celebrated Abbey Road Studio. Meanwhile, according to the company, Minnie Mouse will also soon be donning a tailored polka dot pantsuit created especially by celebrated fashion designer (and somebody’s daughter) Stella McCartney to fete the occasion in style.

Tags:  how big are drones