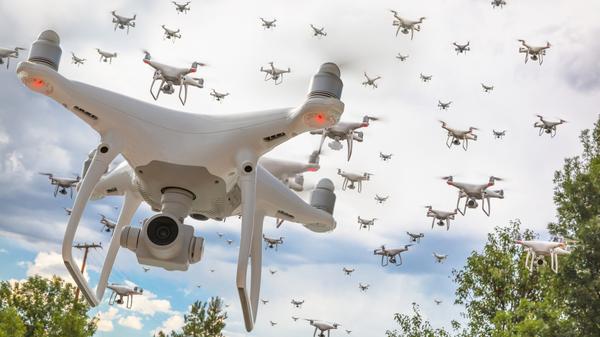 A unit of Raytheon Technologies has not only developed a system allowing a single operator to control a swarm of 130 drones, but did so using off-the-shelf hardware and a focus on making the platform as easy to use as it is efficient.

Raytheon Intelligence and Space subsidiary Raytheon BBN created the tech permitting an individual or small group to operate 130 physical drones and 30 simulated UAVs in indoor and outdoor urban environments. The innovation was demonstrated at the US Defense Advanced Research Projects Agency’s fifth OFFensive Swarm-Enabled Tactics program, which showcases ways of deploying multiple drones in unified missions. The Raytheon BBN tech not only caught attention for its ability to enable one person to control over 100 craft at once, but also its simplified approach in doing that – and the capacity for fast, easy adaptation to new challenges.

The company began by using off-the-shelf hardware and software, then created in-house additions where any gaps arose. Reliance on widely accessible gear flowed from a major objective in the project: allowing everyday tech to ensure the final system was as familiar feeling and easy to use as it was effective in its operation.

Intentionally deprived of heavy-duty computing and intricate (and costly) sensor components, the project obliged researchers to come up with simple methods for planning and fulfilling what were often complex objectives. In doing so, the Raytheon BBN team conceived a scalable, modular, and decentralized system to manage a variety of immediate tasks and overall mission objectives, as well as a capacity to adapt to new ones in the future.

To make that possible, the group figured out a way for the system to determine how drones in a swarm should be individually assigned, then get them working together so wider mission targets can be fulfilled most effectively.

“Our software is smart enough to assign drones with the right capabilities to the appropriate set of tasks,” said Shane Clark, Raytheon BBN OFFSET principal investigator. “For example, if the task is to surveil a building, multiple drones will be dispatched with each surveilling portions of the building. The software considers each platform’s sensor capabilities, and tasks drones with downward facing cameras to surveil the roof.”

That capacity for automated adaptation is key to making the operation of 130 drones or more in a swarm possible for the single person overseeing it all. But the Raytheon BBN takes that facility even further. Once the craft are in the air and performing their mutually agreed assignments, the system will also look for and detect where gaps may exist towards fulfilling the broader mission, and reassign UAVs to fill those.

Meanwhile, project researchers also created a way of using images in camera feeds to create a virtual reality interface of the wider environment in which craft are operating. That capacity can allow the operator to virtually test the feasibility of additional assignments for drones in the swarm, and – thanks to immediate execution afforded by a speech interface – send them off to work on those if those prove attainable and desirable.

“You can look behind the building to access a view of drone locations, for example, and use the virtual reality environment to test and see if your mission is viable,” Clark says.” We also developed a speech interface with the operationally deployed Tactical Assault Kit, or TAK, integration capability that enables the operator to act quickly while maintaining situational awareness over many systems simultaneously.”

Tags:  how are drones controlled