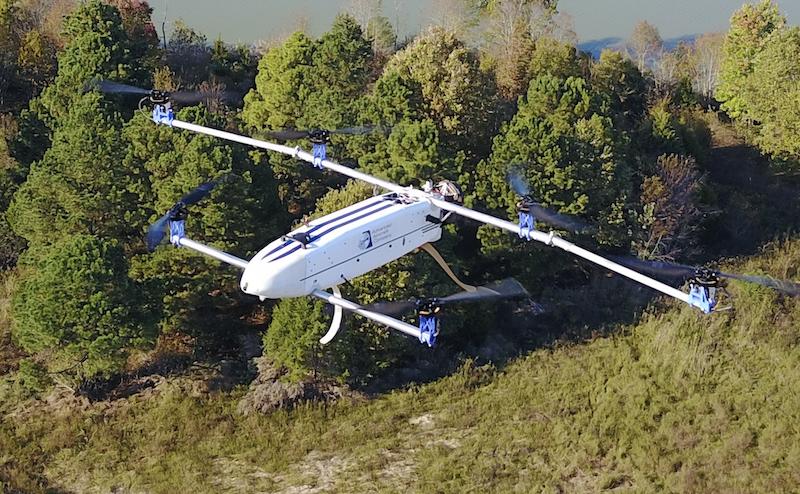 The system offers up to 3.5 hours of flight time depending on payload, Fredericks said, and is designed to increase productivity for operators. Mission types includes surveying and mapping applications and ISR.

“Productivity is a key metric of interest for drone operators. From customer discovery phone calls, we’ve found battery powered multirotor drones average 3.4 hours of productive use in an eight-hour workday,” said Fredericks, who is a former NASA aerospace engineer and U.S. Marine Corps veteran. “That is an economic pain point we’re focused on solving.”

Typical battery powered drones offer between 20 and 30 minutes of flight time, Fredericks said, and often require generators to be brought on site for battery charging. The HAMR’s longer flight time can double the number of acres imaged in a day, with the system actually using less energy than the generators required to keep multiple drone batteries charged throughout a mission.

The system is also designed to overcome common challenges associated with gas engines. For example, there isn’t a carburetor making the engine cantankerous and difficult to start, Fredericks said. Instead, the propulsion system is computer controlled, monitoring factors like air temperature and pressure and always making sure the engine receives the appropriate amount of fuel.

“It’s like a modern car. You put the gas in the drone and the computer controls everything else,” Fredericks said. “You even can shut the engine off and start it back up again mid-flight, which is a unique capability.”

As for the batteries onboard the drone, the control system records how many amps come in and out of the battery pack and adjusts the power control to the engine to meet that amperage. Batteries can fill in gaps or power the system when necessary, and don’t have to be taken out of the aircraft to be charged. The engine handles that, bringing the batteries to the target charge.

HAMR can fly in harsh environments, with less maintenance and overhaul required than with typical gas engines. The system’s line replaceable units (LRUs) make that possible. Rather than taking months, repairs can be completed quickly in the field and require minimal downtime.

“In manned aviation the concept of LRUs is normal and expected, but it’s novel in a drone,” Fredericks said. “In our system, all the complicated electronics are in LRUs around the aircraft. If anything breaks down inside the LRU, we can overnight a spare LRU that can be swapped out in 10 minutes, making the drone airworthy again.”

HAMR has various aerodynamic design features, Fredericks said, including the fact it’s stacked axially instead of vertically like most drones. This reduces aerodynamic drag and gives it better flow along the belly.

The props are also spread out laterally, spreading the weight over a larger span—again leading to better aerodynamics, Fredericks said.

HAMR has a dual payload capability, which Fredericks describes as unusual, allowing for multiple payload options or more fuel capacity.

“There’s an internal payload and an external payload bay, one up on the nose and the other on the belly,” he said. “There are also additional electronics on the system to power the sensors, so we can have onboard processing as well.”

The system’s open modular architecture makes rapid payload reconfiguration possible, depending on application and mission. Infrared cameras and LiDAR are among the sensors used for commercial operations, while the system also can carry standard Group 2 payloads for defense applications, including electro-optical (EO), infrared (IR) laser and communications systems.

Once BVLOS operations become routine, demand for long endurance, high performance drones like HAMR will rise, as they allow for increased productivity, Fredericks said. In fact, he’s currently developing a system known as Greased Lightning, a 10-propeller UAS that will offer six to eight times more flight time than HAMR. He began work on this system during his time at NASA, and hopes to have it ready for prime time in the next two to three years.

Tags:  what is optical flow drone