Migrant abuses continue in Libya. So does EU border training 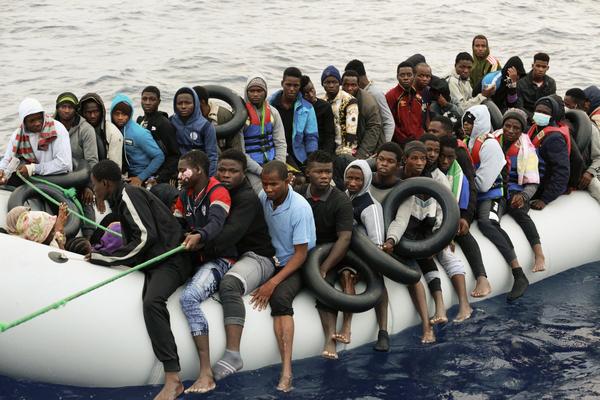 BRUSSELS (AP) — A confidential European Union military report calls for continuing a controversial EU program to train and equip Libya’s coast guard and navy despite growing concerns about their treatment of migrants, a mounting death toll at sea, and the continued lack of any central authority in the North African nation.

The report, circulated to EU officials this month and obtained by The Associated Press, offers a rare look at Europe’s determination to support Libya in the interception and return of tens of thousands of men, women and children to Libya, where they face insufferable abuse.

Compiled by Italian navy Rear Adm. Stefano Turchetto, head of the EU arms embargo surveillance mission, or Operation Irini, the report acknowledges the “excessive use of force” by Libyan authorities, adding that EU training is “no longer fully followed.”

Hundreds of thousands of migrants hoping to reach Europe have made their way through Libya, where a lucrative trafficking and smuggling business has flourished in a country without a functioning government, fragmented for years between rival administrations in the east and west, each backed by armed groups and foreign governments.

The European Commission and the EU’s External Action Service — the equivalent of the 27-nation bloc’s foreign office — declined to comment on the report. But spokesman Peter Stano confirmed the EU is determined to train coast guard personnel and bolster Libya’s capacity to manage a massive search-and-rescue area of the Mediterranean.

The EU training program “remains firm on the table to increase the capacity of the Libyan authorities to save lives at sea,” Stano said.

Criticism of Europe’s migration policies has been growing. At least three requests have been filed to the International Criminal Court demanding that Libyan and European officials, as well as traffickers, militiamen and others be investigated for crimes against humanity. A U.N. inquiry published in October also found evidence that abuses committed in Libya may amount to crimes against humanity.

Last week, U.N. Secretary-General Antonio Guterres called for countries to “re-examine policies that support interception at sea and return of refugees and migrants to Libya.”

Stano dismissed those criticisms. “When it comes to migration, our objective is to save peoples’ lives, protect those in need and fight trafficking in human beings and migrant smuggling,” Stano said.

“The Europeans pretend to show the good face,” said a Cameroonian woman who arrived in Libya in 2016 with her child thinking she would find work. Instead, she was trafficked and forced into prostitution after being separated from her daughter. The AP does not identify victims of sexual violence.

In 2018 she got on a smuggler’s boat bound for Europe but her group was caught by Libyan authorities and taken to the notorious Tajoura detention center where detainees were beaten and abused. She was only released after a friend paid a $700 ransom to the guards.

Questioned about the detention centers in Libya, Stano said the EU’s position is clear: “They are unacceptable. The current arbitrary detention system must end.”

But despite such assertions nothing has changed on the ground. The Libyan government last month named Mohammed Al-Khoja, a militia leader implicated in abuses against migrants, to head the Department for Combating Irregular Migration, which oversees the detention centers.

“The same people in charge of dismantling the trafficking business are the traffickers themselves,” said Violeta Moreno-Lax, founder of the immigration law program at Queen Mary University of London.

The EU report noted the “excessive use of physical force” by a Libyan patrol during the Sept. 15 interception of a wooden boat with about 20 migrants off the coast of Libya.

The Libyan forces used tactics “never observed before and not in compliance with (EU) training ... as well as international regulation,” said the report. It provided no further details about what exactly happened.

A spokesman for the Libyan coast guard did not respond to AP requests for comment about that incident or the EU report. In the past, Libyan interior ministry and coast guard officials have said they are doing their best with limited resources in a country plagued by years of civil war.

In response to AP questions, Frontex, the European coast guard and border agency that documented the Sept. 15 interception said it had filed a “serious incident report” but could not disclose details.

Ozlem Demirel, a German Left party member of the European Parliament, said the report offered “further evidence that there should be no cooperation with this force.”

“The fact that Irini is even seeking further training is, in my view, outrageous,” she said.

Violent tactics employed by Libyan authorities at sea have been widely documented for years. Last week, activists on a volunteer rescue ship reported seeing a Libyan patrol vessel “shooting at a person who had jumped into the water.”

Some 455 million euros ($516 million) have been earmarked for Libya since 2015 through the EU’s Trust Fund for Africa, substantial amounts of which have gone to finance migration and border management.

However, huge sums have been diverted to networks of militiamen and traffickers who exploit migrants, according to a 2019 AP investigation. Coast guard members are also complicit, turning migrants intercepted at sea over to detention centers under deals with militias or demanding payoffs to let others go.

EU money, much of it funneled through Italy, has been used to train staff and refurbish boats for Libyan authorities. The Libyan coast guard also received satellite phones and uniforms and will get three new patrol vessels in the next two years.

To intercept the small unseaworthy migrant boats in the Mediterranean, Libyan authorities also depend on surveillance gathered and shared by European drones, aircraft and radar. But even then the political chaos in the country often impacts search-and-rescue operations.

Irregular migration from North Africa to Italy and Malta spiked in 2021 after a drop in 2020 largely due to the coronavirus pandemic. Crossings on the central Mediterranean accounted for one-third of all reported illegal border-crossings into Europe, according to Frontex.

But as departures increased, so did interceptions. Last year, the Libyan coast guard picked up and returned to Libya more than 32,000 migrants, nearly triple the number for 2020.

Yet despite all the equipment and training provided to Libya to save lives, more than 1,500 people died or went missing last year, the highest death toll since 2017.

Follow all AP stories on global migration at https://apnews.com/hub/migration.

Tags:  are drones legal in spain