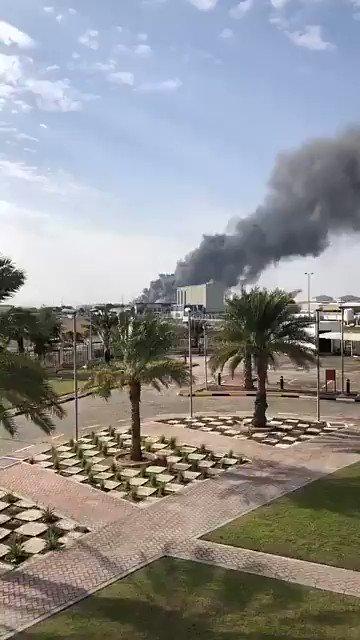 While the world remains focused on the trouble in Ukraine and fears of an imminent Russian invasion, in a small corner of the Middle East, a drone attack could very well mark a dangerous turning point.

Stability is one of the United Arab Emirate’s major selling points — helping to attract millions of expatriates and billions of dollars in foreign investment.

The UAE relies heavily on foreign workers, who make up the vast majority of the country’s workforce. Authorities intensively manage the country’s reputation and freedom of political expression is practically non-existent.

Defenders of those restrictions on expression argue that they’re necessary to maintain stability against all odds in the conflict-ridden Middle East.

That image of stability suffered a major shock when a deadly drone attack hit fuel trucks near the airport in Abu Dhabi on Monday, causing multiple explosions and killing three people, CNN reported.

In response, the UAE and Saudi Arabia responded by pummelling the Yemeni capital of Sana’a with airstrikes, killing at least 12 people.

Hailing the attack as “a successful military operation,” the Houthis’ military spokesman Yahya Saree warned they could target more facilities in the UAE, which has been part of a Saudi-led military coalition battling the rebels in Yemen, Al Jazeera reported.

The years-long war has killed tens of thousands of people and pushed the country towards humanitarian catastrophe.

Negotiations between Iran and Western powers on how to revive the 2015 deal to limit Tehran’s nuclear program have recently shown signs of progress.

And there are also indications that historic but difficult discussions between Saudi Arabia and regional rival Iran were beginning to bear fruit, CNN reported.

But the unprecedented Houthi attacks in Abu Dhabi could throw a wrench into those talks.

And if the rebels make good on their promise to launch further strikes, it could dent the UAE’s image as a safe place to visit, live, work and do business.

In addition to being the first deadly attack in the UAE in many years, the drone attacks on Monday demonstrated the Houthis’ ability to launch long-range attacks, CNN reported.

Yemen’s rebels frequently conduct cross-border attacks on Saudi Arabia, Yemen’s neighbor, but these were relatively short distances in comparison with Abu Dhabi, and the majority of the missiles and drones were intercepted.

Now Yemen’s Houthis have delivered on a threat that they have for years made against the UAE, a major coalition partner in a six-year Saudi-led military campaign to crush the Iran-backed rebels, CNN reported.

In 2019, the UAE pulled most of its troops from Yemen, after privately deeming the war unwinnable.

More recently, however, the UAE has returned to the fray, backing Yemeni groups in flashpoints like the oil-rich provinces of Shabwa and Marib and repelling Houthi fighters.

Now, analysts say the rebels are eager to spark another Emirati withdrawal.

“The intervention of the UAE-supported forces was a game-changer. This angered the Houthis,” said Maged al-Madhaji, executive director and co-founder of the Sana’a Center for Strategic Studies.

“The Houthis are trying to create some sort of balance by striking the image of stability and security in the Emirates.”

It is highly suspected that the drones were supplied by Iran, the principal supporter of the Houthis in their war on the internationally-recognized government of Yemen.

But it is unclear if the Houthis’ backers in Tehran ordered the strike or if the rebel group suddenly went rogue.

It wouldn’t be the first time Iran-aligned groups appeared to go their own way and Iran has repeatedly said that it wishes to revive relations with its regional foes.

The attack also has the potential to derail the CPOA [Iran nuclear deal] negotiations in Vienna, as well as parallel talks between Saudi Arabia and Iran seen as critical to the success of a possible second version of the 2015 deal.

“This attack brings home to the UAE that they were playing the game of a major power in the region,” Andreas Krieg, a senior lecturer at the School of Security Studies at King’s College London told Al Jazeera.

It made the Gulf country realize that “they are, after all a small state with a lot of vulnerabilities,” Krieg said.

“This [the incident] is the greatest damage to the reputation of the UAE because they have always portrayed themselves as a safe and secure country to do business.”

The idea of using Israeli defense systems came up in recent unofficial discussions between the two countries’ officials in the UAE, when the UAE officials probed whether Israel would be willing to supply the systems, sources said.

In September, Israeli sources said the Saudis were looking at the Rafael-produced Iron Dome, which is better against short-range rockets, or the Barak ER, produced by Israeli Aerospace Industries, which is designed to intercept cruise missiles.

Weeks ago, the Emirates signed a US$3.5 billion deal with South Korea to acquire its Cheongung II mid-range surface-to-air missile weapons system, but the system isn’t expected to be delivered before 2024.

An Israeli system could serve as an interim solution to an urgent problem, sources said.

An Israeli source told Breaking Defense that three operational systems, or a combination of the three, could be a partial answer until the South Korean system comes online: Israeli Aerospace Industry’s Barak 8 or Barak ER, or the Rafael Spyder.

The Barak-8, currently in operational use in Israel and India, was also reportedly used to shoot down a Russian-made Iskander ballistic missile launched by Armenia in November 2020 during a conflict over Nagorno-Karabach, Breaking Defense reported.

The Spyder, a truck-mounted system, is a “quick response” defense system that Rafeal says has “multiple target engagement capability for dealing with saturation attacks.”

“It [the attack] totally undermines the UAE’s reputation as a place of stability especially vis-a-vis tourism, finance, and trade, but crucially it also casts doubt on their ability to build a nuclear power station,” Jones told Al Jazeera, referring to UAE’s nuclear energy ambitions.

Aside from the UAE’s public bravado, experts say it is more likely [the attack] will put pressure on the UAE to seek a rapprochement with Iran.

“Caution on the UAE’s side is far more likely than a shift back to confrontation,” the source told Al Jazeera.

Dave Makichuk is a Western Standard contributor. He has worked in the media for decades, including as an editor for the Calgary Herald. He is also the Calgary correspondent for ChinaFactor.news and has covered military issues for decadesmakichukd@gmail.com