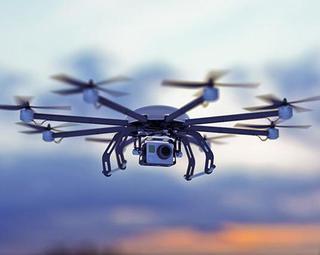 Drones have been around for the last five-six years in India, primarily used for inspection and surveying. Though the civil aviation side of the drone industry has started to rise, there’s a need to secure the airspace with efficient systems and checks. The recent attack on the Air Force base in Jammu highlights the need for this.

Protecting personnel and civilian/military infrastructure from drone threats is increasingly becoming broad-based. Drone threats may arise from as simple a case as carelessness, such as a drone flying too close to an airport, to as grave as carrying ammunition to undertake an act of terror.

Governments and law-enforcement agencies across the world need to be able to look into the sky, see a drone and instantly know whether it is supposed to be there or not.

The Digital Sky platform, which is currently being developed, and the Civil Aviation Ministry’s UAS (Unmanned Aircraft System)Policy 2021 are steps towards enabling a safer sky for all. The Digital Sky platform allows only those drones that comply with the NPNT (No Permission, No Takeoff) protocol to operate in areas demarcated as green and yellow zones — that is, over almost 70 per cent of the country.

The platform puts multiple checks in place, but these are not sufficient for tackling the security threats arising from rogue drones.

There is a need for effective Counter-UAS (C-UAS) systems to be brought into operation. The C-UAS primarily follows a two-pronged approach — detect and interdict. For detection, there could be various types of protocols created around radar, radio-frequency, acoustics, combined sensors, etc. Once the UAV (Unmanned Aerial Vehicle) is detected, it needs to be interdicted through measures like communication protocol, sensors, jamming the radio frequency, and physically through drone nets, firing, etc.

However, as with all technologies, these systems have weak spots, which have the potential of being exploited by drone operators. For instance, radars are ineffective in distinguishing between birds and drones, and many radar systems rely on line-of-sight plus the object’s flight movement to consistently track it.

The Tokyo police have been using ‘flying nets’ attached to legal drones to capture and neutralise rogue UAVs. the Taiwanese police have been testing RF jammer guns to bring down rogue drones. The other anti-drone technology is through geofencing agreements with commercial drone manufacturers, a technique that will prevent UAVs from flying near critical infrastructure by pre-programmed codes put in by manufacturers.

There are several anti-drone systems to intercept and interdict drones. Drone Hunter by Fortem Technologies is one such system. It fires a NetGun to capture the target mid-air. A Dutch company, Guard From Above, uses trained birds of prey to intercept hostile drones.

India needs to invest more in C-UAS solutions, which will create safer skies for all good drone operations to be carried out.

The technology for counter-drones is still evolving. One of the reasons is that the commercial off-the-shelf drones can be weaponised easily by rogue elements with some customisation and a little investment. In contrast, the counter-drone systems are expensive, each with limited capabilities.

Hence, to have an effective deterrent system requires a combination of different types of C-UAS systems.

According to DRONEII, a leading drone market research agency, “In the future, companies will be focussing on covering the whole workflow from detection via threat level estimation to deciding on the following steps and implementing interdiction procedures if needed. This will have to be integrated into existing systems by involving all relevant stakeholder and systems and defining communication guidelines.” It is important to understand that it is not the drones that are rogue, but the persons operating them. Drones are beneficial in a whole range of areas such as healthcare, emergency services, security and surveillance, agriculture, logistics, and defence.

The answer to the emerging threat of rogue drones, though serious, is not over-regulation but smart regulation, creating a balance between the evolving drone sector and the emerging security concerns.

This needs to be done with investing in cutting-edge technologies for countering drones and indigenous R&D, with the support of government grants besides private investments.

‘National Counter Rogue Drone Guidelines’ is a step in the right direction outlining ‘procedural means’ of prevention, deterrence and denial and ‘active means’ of detection, interruption and destruction. This must be coupled with ‘Counter Rogue Drone Deployment Plan’ based on vulnerability analysis.

Tags:  how to detect a drone in the sky