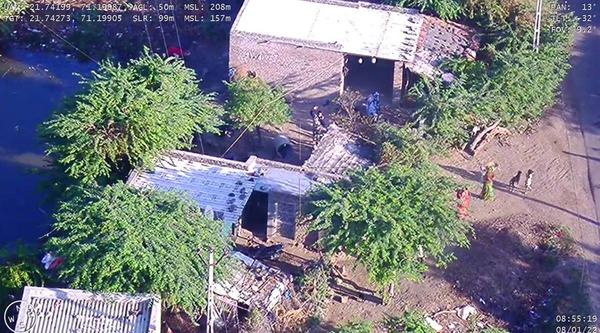 According to police, operation “Special Bhatti” was conducted in three talukas of Amreli district on Saturday using a drone equipped with a high-definition camera for surveillance to bust illicit country liquor manufacturing dens and nab the accused.

As many as 65 cases were lodged across Amreli on January 8 of which nine cases were for running the dens, 23 were for seizure of country liquor and 33 were against those caught consuming the liquor. In total, 44 persons were arrested, police said.

Explaining the operation, Amreli superintendent of police Nirlipt Rai said, “We sought one drone from our range Inspector General (IG) office that was assigned to us by the Gujarat Police. A sub-inspector and his team of the special operations group (SOG) are trained to fly the drone.”

“Usually, those involved in manufacturing country liquor do it on the river banks or near any water source. They also make sure that these dens are near any garbage disposal spot outside the villages to hide the stench from the country liquor. Conventional methods to bust such dens are difficult as first we have to cordon off the villages and then begin the search operation. With drone surveillance, we focused on the river banks of three talukas — Savarkundla, Jaffrabad and Amreli,” Rai said adding that drones will now be used in other police operations as well.

“We will use drone cameras for weekly inspection of the riverbanks in Amreli. We will also use them for action against illegal sand mining. Drones will give us added advantage,” Rai added.

During the Covid-19 lockdown, drone experts were pooled in by the Gujarat police to keep a watch on terraces and congested lanes in cities to check violations of lockdown norms.

Tags:  what is the definition of drone