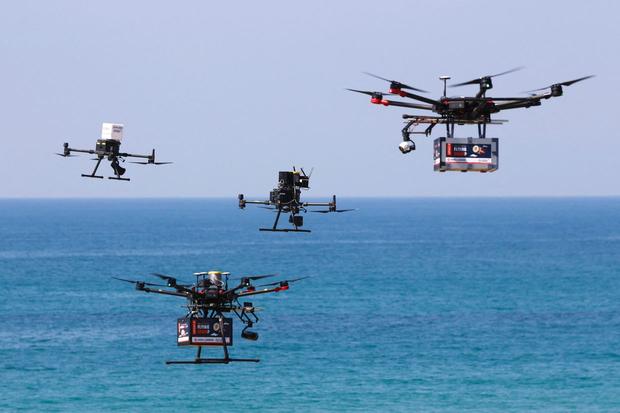 Drone powerhouse Israel is translating the know-how of air force veterans to the delivery of sushi and ice-cream, as companies tap their expertise to avoid collisions in increasingly crowded skies.

On a grassy stretch of a Tel Aviv beachfront, three drones flew above shiny high-rises this week, propellers buzzing as they lowered down onto landing pads.

Two carried sushi, and a third hauled cans of beer.

Their flight was made possible by High Lander, an Israeli company that specialises in traffic control for autonomous drones, and Cando, which helps craft drone strategies for clients.

"To fly one drone is not an issue," High Lander's chief executive Alon Abelson told AFP.

"We are talking about multi drones... coming from different drone manufacturers, but still they are monitoring with our software and we can make sure they don't collide."

The demonstration was part of a 20 million shekel, or about $6 million, public-private initiative to advance Israel's drone technology.

"Our goal is to create a competitive market in Israel, not dominated by one company," she said.

"If we manage to remove vehicles from the roads to the air, we can affect traffic, we can reduce air pollution... we can create a better, safer environment for the delivery of goods."

Drone expert Michael Horowitz, a political scientist at the University of Pennsylvania, said Israel was crafting "civilian analogues" to its military drones that are getting smaller and can reportedly move and strike in coordination.

Israel's military drone programme has faced criticism, especially from Palestinians in the blockaded Gaza Strip, who say it induces fear and can lead to the harming of civilians.

In the commercial drone industry, Horowitz said Israel could offer a new approach to companies that tend to develop their technologies alone.

"Often you'll have a company like Google that is operating oversight of its own systems only," Horowitz said.

"If an Israeli company develops an effective local-level drone command and control architecture that can include drones of lots of different companies, I could imagine a lot of people potentially interested in that product."

Abelson of High Lander said he had clients around the world, including in Japan, South Korea, France, the United States and Israel and African countries.

Manoel Coelho, CEO of Brazil's Speedbird Aero drone company, told AFP he used High Lander to "deconflict airspace" because it was "one of the first in the world to do it in such an organised manner".

Hadas Aharoni, 22, a controller with the Airwayz drone company, monitored dozens of autonomous drones flying in the northern city of Hadera, though she sat in a control room over Tel Aviv's busy Ayalon highway, about 50 kilometres (30 miles) to the south.

"We can see the flight paths where the drones take off and land, their heights, their batteries and all sorts of problems that we need to resolve so that the drones arrive as they should," Aharoni said.

So far, the drones have been running practise missions to set landing pads in the city.

"When in the future there will be more flight programmes, we are checking this system will be stable," she said.

Israeli companies are taking notice of the developing industry.

The Golda ice cream chain opened a pop-up beachside shop in Tel Aviv where customers could scan a QR code and order frozen treats via drones.

"In less than 10 minutes you can get your order, which you can't do with regular vehicles," said marketing manager Talya Marder.

"I think as this catches on and people understand how much value this adds, we'll be there."

Israel a step closer to commercial drones with latest tests

Citation: Flying sushi: Israel readies for delivery drone traffic jams (2021, October 15) retrieved 29 January 2022 from https://techxplore.com/news/2021-10-sushi-israel-readies-delivery-drone.html
This document is subject to copyright. Apart from any fair dealing for the purpose of private study or research, nopart may be reproduced without the written permission. The content is provided for information purposes only.
Tags:  a deep learning approach to drone monitoring