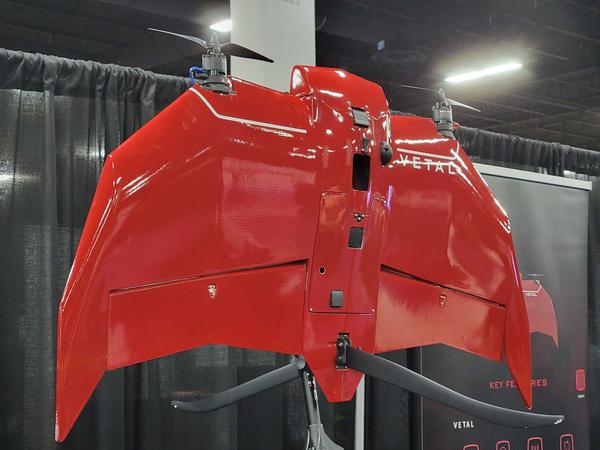 If imitation is indeed the highest form of flattery, developers at Wingtra will feel praised by the Thailand-produced Vetal, a similar-looking and -operating vertical takeoff and landing (VTOL) drone hoping to give its Swiss predecessor some competition.

On hand in Las Vegas at CES 2022, Vetal was rolled out for pre-order last year, and is now being used by primarily industrial clients taking advantage of its Wingtra-esque operation as a fixed-wing drone with VTOL functionality. Produced by Bangkok-based HG Robotics, developers believes the craft’s performance and payload versatility will eventually make it attractive to a wider selection of enterprise and agricultural operators – and perhaps even consumers hankering for vertical departure and horizontal flight.

Like the Wingtra Gen II, when upright Vetal looks a bit like a bat – especially with its sharper wing angles that lend it a certain vampire vibe. Both VTOL drones stand on the ground by tail-attached stabilizers, and boast roughly the same wingspan (Vetal five centimeters longer at 1.3 meters), weight (3.7 kgs vs. 3.8 kgs), 800-gram maximum payload, and flight capacity (Wingtra’s 60 seconds less at 59 minutes).

Vetal developers believe their drone has an advantage over rivals once it has transitioned from VTOL mode to horizonal fixed-wing flight. Whereas Wintra’s cruising speed is listed at 35.8 mph, Vetal’s maximum is nearly 56 mph. That greater speed and optimized aerodynamics of its composite body material, HG Robotics says, allow the craft to cover twice the area as other fixed winged drones during a single outing, and 14 times more than most standard VTOL rotor UAV.

Its other big selling point, developers claim, is Vetal’s adaptability to all kinds of sensors and cameras, including RGB, multispectral, thermal, and customizable gimbals. The VTOL drone is also equipped with a miniaturized front-facing camera with full rotation capability for 360 views. It features onboard artificial intelligence (AI) applications that allow precise mission performance, and a diversified range of tasks to be performed in single flights.

In addition to automated VTOL tech that oversees departure and arrival in docking stations, the company has created a system allowing Vetal to land on moving vehicles, including trucks, trains, or ships. To do that, designers equipped the drone with fully integrated visual, infrared, and radar-based apps which – along with an AI controller – enable it to seek out moving landing targets. HG Robotics calls that a rare, if not unique trick.

Those varying capacities, the company believes, will broaden enterprise uses from the current mapping and surveying most of its constructing and mining clients operate, and make it a more versatile and longer-flying aerial asset for all kinds of sectors. They also think Vetal can win agricultural customers deploying it to estimate crop yields and detect weed and disease infestation, and to measure volumes of fertilizer required ahead of growth periods. And who knows, it could even attract the interest of private drone pilots wanting the facility of an VTOL craft that, once aloft, soars like a fixed-wing vampire bat.