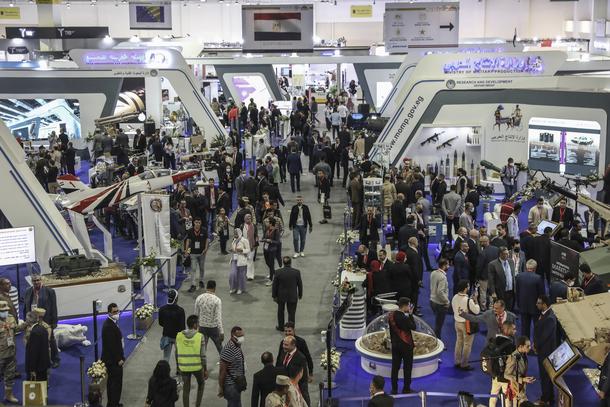 BEIRUT — Two locally produced drones have made their debut at the Egypt Defence Expo this week.

The Nut drone, which was co-produced by the Arab Organization for Industrialization and the Military Technical College, can perform tactical reconnaissance missions during the day and night using electro-optical technology.

It has a maximum mission payload of 50 kilograms and an endurance of 10 hours. Operators can also integrate onto the system equipment for satellite communication.

Egyptian President Abdel-Fattah el-Sissi inspected the Nut drone, named after the ancient Egyptian goddess of the sky, on the first day of the show.

The EJune-30 SW drone was also on display at the Egyptian pavilion. The UAV was made by Industrial Complex Engineering Robots in cooperation with the Egyptian Ministry of Military Production.

“EJune-30 looks exactly like the Emirati Yabhon United 40 unmanned aerial vehicle. It is highly probable that this is the Egyptian version of the UAV after technology transfer from the UAE to Egypt, but ICER officials at the show didn’t respond to any question regarding this subject at the show,” Mohamed al-Kenany, who leads the military studies unit at the Cairo-based Arab Forum for Analyzing Iranian Policies, told Defense News.

The Yabhon United 40 is a medium-altitude, long-endurance UAV capable of autonomous flight operations. It is produced by Adcom Systems for the United Arab Emirates Air Force.

EJune-30 SW can automatically take off and land. It is 8.9 meter long and has a wingspan of 12 meters, a maximum takeoff weight of 1,400 kilograms, a maximum speed of 260 kph, an endurance of 24 hours, and a maximum operating altitude of 7,000 meters.

There was also a brochure at EDEX for the locally made Thebes-30 drone. There was no mockup at the show since the system is still under development. It is being designed to perform intelligence, surveillance and reconnaissance missions.

EDEX 2021 is taking place Nov. 29-Dec. 2 and features pavilions for several countries, including Egypt, Saudi Arabia, the UAE, France, the United States and South Korea. It’s hosting about 400 exhibitors this year. The show was scheduled to take place in 2020 but was postponed due to the COVID-19 pandemic.

Agnes Helou is a Middle East correspondent for Defense News. Her interests include missile defense, cybersecurity, the interoperability of weapons systems and strategic issues in the Middle East and Gulf region.

F-35 fighters, 5G networks, and how the UAE is trying to balance relations between the US and China

The United Arab Emirates recently suspended F-35 acquisition talks amid U.S. concerns over a 5G vendor, but the Middle Eastern country is still carrying on with its network connectivity efforts. Will it circle back to negotiations over the aircraft?

What is 5G? An electrical engineer explains.

Steps Lockheed Martin is taking today to virtualize its Aegis Weapon System are helping to underpin the U.S. Navy’s integrated combat system and the Pentagon’s vision for joint all-domain warfare.

The Army is slated to pick the actual weapon in the coming months.