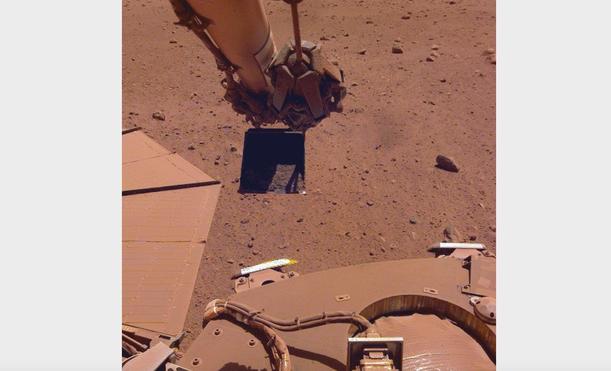 Martian dust accumulating on the panels of NASA's InSight lander could force the Red Planet mission to end its work within the next 10 months, its principal investigator warned during a recent update.

To save power and preserve InSight's essential items like heaters in the cold Martian environment, mission managers have already turned off several instruments on the lander. NASA has also tried a new way of encouraging the wind to blow off sand, but with limited success.

“The dust accumulation on the solar arrays has been considerable. We have about 80% obscuration of the arrays," said Bruce Banerdt, principal investigator for the InSight mission at NASA's Jet Propulsion Laboratory (JPL) in Southern California, according to SpaceNews.

Banerdt showed the impact of the declining power levels during a June 21 meeting of NASA's Mars Exploration Program Analysis Group. When InSight landed near the Martian equator in November 2018, he said, the robot was generating roughly 5,000 watt-hours of power. Today that level is less than 700 watt-hours.

The declining energy levels are not a huge surprise. InSight is in an extended phase of its mission to understand the origin story of the Martian interior and, by extension, that of rocky planets like Earth. A team reviewing the potential for InSight to extend its mission last year warned that the spacecraft's power margins would require new measures to keep going after July 2021. Otherwise, power levels "are likely to reach critically low levels during the proposed EM [extended mission]" that ends in December 2022, compromising potential science return, the panel said at the time.

Sometimes a lucky gust of wind from a dust devil can blow accumulated dirt and dust off a spacecraft, as happened during NASA's long-running Spirit and Opportunity Mars rover missions. "In the case of InSight, the spacecraft's weather sensors have detected many passing whirlwinds, but none have cleared any dust," JPL officials said in a statement on June 3.

InSight managers have thus been implementing backup plans. They spent more than a year trying to shake off the dust through methods like pulsing the lander's solar array deployment motors but met with little success, JPL officials said. Then, starting on May 22, engineers attempted a new method of budging the dust by using InSight's robotic arm to trickle sand near the panels.

If InSight aimed the sand stream just right, some grains were expected to "saltate," or bounce off the solar panel surface, JPL officials said. The bouncing grains skimming off the panels could then carry off some of the smaller dust particles already lying there, using the prevailing Martian winds.

“We had some success with that,” Banerdt said on June 21 of the various attempts. The first try on May 22 increased energy output by 25 to 30 watt-hours, he said. But the second and third attempts only showed a moderate increase, although he said the three cleanings offered "a little bit of headroom that we didn't have before."

Now the managers are trying to triage which, if any, of the science instruments can stay on through aphelion — the farthest Mars gets from the sun during its elliptical orbit, which the planet will reach on July 12. Sensors for weather and magnetic field data are now used sporadically at most. InSight's main instrument, its seismometer suite, has remained operational so far, although Banerdt warned that it may need to be turned off as available light diminishes.

"There may be a month or two of time where we might have to turn off the seismometer, but we’re trying to tighten our belts and sharpen our pencils to see whether we can operate straight through," Banerdt said. Even after aphelion, he warned, energy levels are expected to fall again by April 2022 due to more dust on the panels and in the atmosphere, along with changes in orbital geometry.

"Unless we get a fairly significant increase in our solar array output, we’re likely to end our mission sometime around that time next year," Banerdt added, as the mission would fall below its required "survival energy" to keep functioning.

While relying on solar panels may seem risky in such a dusty environment, doing so lessens the amount of mass at launch, lowering cost and complication for the mission, JPL officials said. Adding dust-removing brushes or fans could add failure points or problems to a long-running mission.

Bigger NASA Mars robots such as the Perseverance and Curiosity rovers use nuclear power, making them more flexible in working in severe environments — but also more dependent on dwindling plutonium-238 decay levels over time. Perseverance, which just landed in February, should have enough power to go for 14 years, NASA officials have said. Curiosity is still going strong, nearly nine years after landing on Mars in August 2012.

Some members of the public have suggested using the new Mars helicopter Ingenuity to fly near InSight and blow off the dust, JPL officials said. This operation is not only dangerous but impossible, they said, given the sheer distance between the two spacecraft — about 2,145 miles (3,452 kilometers).

The next major mission challenge for InSight after aphelion will be around Oct. 7, when Earth and Mars are on opposite sides of the sun. This period of "solar conjunction" happens every two years and can interrupt signals between the planets, so NASA stops active communications with its Mars missions for a few weeks as a precaution.