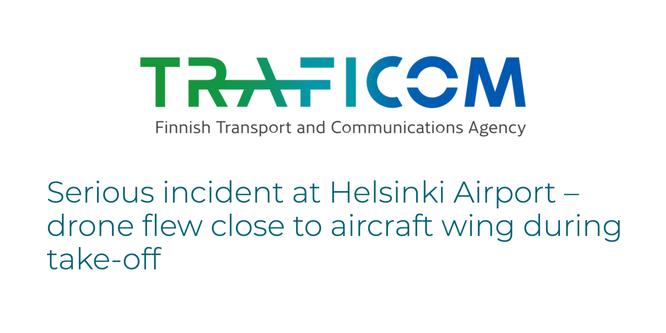 The remote-controlled device flew very close to the wing of a commercial aircraft during take-off.

The Finnish Transport and Communications Agency Traficom has revealed the details of a "serious incident" that occurred on 13 May at Helsinki-Vantaa airport when a drone flew very close to the wing of an airplane during take-off.

In a press release (siirryt toiseen palveluun), the agency said that the crew of a commercial aircraft observed a remote-controlled drone near the right wing while they were at an altitude of approximately 400 metres.

In the statement, Traficom emphasised that anyone operating a drone must be aware of prohibited and restricted airspace areas in accordance with EU legislation.

"A drone hitting the wing of an aircraft may cause significant damage, and the situation in question was very alarming," Traficom Director Jari Pöntinen said.

The drone was flying inside the restricted UAS geographical zone established to protect Helsinki Airport at the time of the incident, and the drone operator did not have a permit issued by air traffic control, Pöntinen added.

There is currently no information about the identity of the drone operator, although an investigation is ongoing, Traficom said, but finding the operator will be extremely difficult.

There have been a number of similar incidents at Helsinki-Vantaa Airport in the last few years, Pöntinen said.

A drone has the potential to break the windshield, engine or control surfaces of an aircraft if it were to make contact.

"For example, a drone could render a helicopter unsteerable if it were to hit the rear rotor", Pöntinen said.

An EU law that came into force at the beginning of this year obliges drone operators to register in the so-called 'drone register' as well as familiarise themselves with the principles of flying drones and completing an online theoretical exam.

There are currently about 10,000 registered drone users in Finland, and there are also about 10,000 people who have passed the drone flight exam. No registration or exam is required when using devices that weigh less than 250 grams and are not equipped with a camera or drones that are classified as toys.

Interior Ministry: Police should be allowed to shoot down drones

Tags:  how to transport drone on airplane