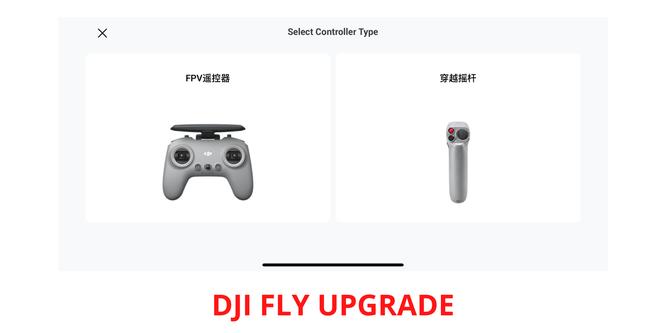 We received a tip with a screengrab last night that intrigued us. There wasn’t much info, just a grab and a suggestion from the source that the latest DJI FLY version would support the AIR 2S drone. That’s kind of what it looked like at first – but it’s not the case. Instead, the upgrade allows you to connect the DJI FPV drone and its controller (or the Motion Controller) to the app.

Here’s what we first saw: A screenshot from a user that came to us via a mutual contact. It appears to show a firmware upgrade indicating the AIR 2S can be made to work with DJI’s FPV offerings. Here it is, and it clearly says, “Adds Connection Guide for DJI FPV to check how to connect to DJI FPV Combo.” That’s true, but don’t let the DJI AIR 2S text in the background fool you (as it nearly fooled us):

Apparently, the guy who grabbed this screenshot tried to get his AIR 2S working with the Goggles V2, but with no success. Having downloaded the upgrade ourselves, we can see why: It’s definitely not for the AIR 2S.

Start by selecting the DJI FPV unit. Then the app asks you to follow these instructions:

And then you’ll be prompted, or we were, to power up the remote controller and connect our mobile device to the goggles. Once we did that, a new screen prompted for a firmware upgrade to the drone itself.

We’re just doing that upgrade now and will let you know what new options we see available.

But if you’ve got a DJI FPV drone, it’s worth upgrading DJI FLY and checking this out.

Well, we still believe that FPV compatibility may be coming to that unit. In fact, there’s a “Coming Soon” field under Advanced Functions. But what functions will those be? We don’t yet know.

Obviously, the ability to connect with DJI’s Goggles V2 (now back in stock) would be a huge bonus for someone who owns, or is considering, the Air 2S. With its 1-inch sensor and 31-minute flight time, this would be a pretty sweet combination. (And we really do like that Motion Controller – which even new pilots seem to take to quite easily.)

Officially, the latest word from DJI is that they are not compatible, at least not at the moment. But if you’ve got a moment to read our earlier story on this, you’ll see there’s some wiggle room in that statement. It said: “For further information, please pay attention to future firmware updates.” Here’s the statement we pulled at the time from DJI’s website:

We’re paying attention. There is no clear answer here yet, but the moment we have any further information, we’ll be sure to pass it along.

DJI's awesome new drone is a winner, packing in high-priced features at a reasonable retail price. You will love this drone.