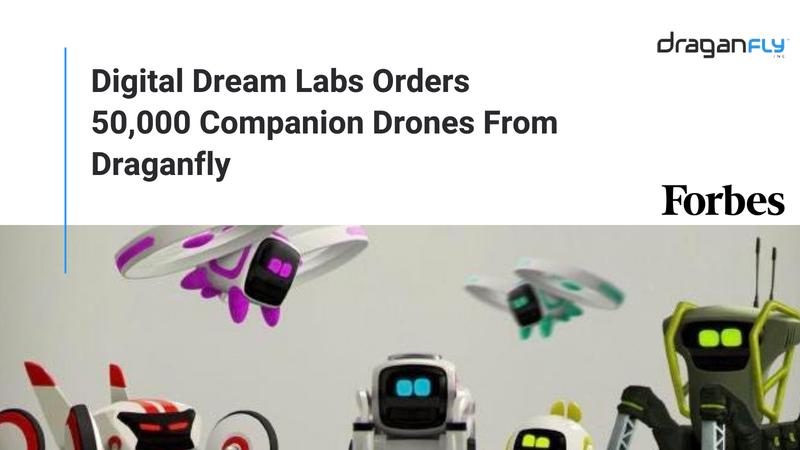 Draganfly, a Canadian drone manufacturer, has for decades built flying robots for a wide variety of applications. Recently, the company received its largest order yet, and for a new use case, a companion drone.

The firm is partnering with Pittsburgh-based Digital Dream Labs to create the next in a product line of companion robots that already includes the Cozmo and Vector surface robots.

According to Draganfly co-founder and CEO Cameron Chell, the initial $9 million order calls for an initial delivery of 10,000 drones starting in 2022, with 50,000 units over the life of the initial agreement. That will make this model, codenamed Project Breezemo, the most common Draganfly product in existence.

CEO Jacob Hanchar launched Digital Dream Labs in 2012, as the result of a student project at Carnegie Mellon University. The company began with a focus on educational video games, and later transitioned to educational robots. The firm sells two robots: Cozmo, an introductory robot designed for pre-teen children, and Vector, an AI-enabled robot popular with adults.

Both robots integrate with a suite of ancillary products and services that Digital Dream Labs offers. “If you want to play a game with your robot, you can do that right out of the box. We don’t interrupt the gameplay to force owners to learn something,” says Hanchar. “But if you want to program your robot to enhance the game experience, or build new game experiences, we facilitate that. The level of interaction goes as deep as each robot owner wants.”

To date, Digital Dream Labs has sold 2 million Cozmos and 120,000 Vectors, with a backlog of 30,000 Cozmo and Vector orders, as the manufacturer works through supply chain issues. Hanchar plans for hundreds of thousands more orders in the second half of 2022, including the new Project Breezemo robot.

Digital Dream Labs positions its robots as subscription services. Both Cozmo and Vector owners can enjoy their robots offline, but a subscription is necessary to take full advantage of Vector’s artificial intelligence capabilities.

The company is building up an ecosystem around the collection of robots, including a TV series called Cozmo and Friends developed with media partner 24Watts. The concept already boasts content on YouTube, with twenty-six full episodes debuting later this year.

Hanchar credits the design of the ecosystem and the individual robots with their appeal to a wide audience. Half of the company’s subscribers are female, and the firm has found its robots in 196 different countries.

For Draganfly, which makes the Project Breezemo flying drones, the partnership is an opportunity to put its robots into more hands than ever before. The company will scale up service and support to deal with a wide range of customers, many of whom will lack the technical and troubleshooting skills that drone operators traditionally have.

Draganfly views education as a key market for large-scale drone manufacturing, and has signed partnerships with WozEd and Drone Racing League to engage more students with drone deployment and automation.