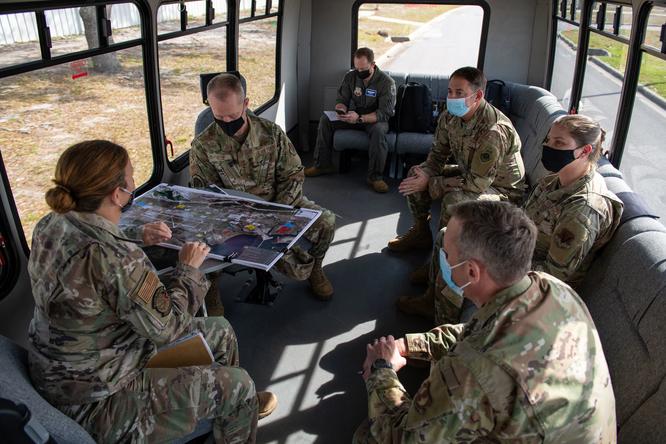 Gen. Mark D. Kelly, commander of Air Combat Command, visited 325th Fighter Wing units at Tyndall and Eglin Air Force Bases, Jan. 24-25.During the visit, Team Tyndall displayed Installation of the Future initiatives while showcasing the resiliency of Team Tyndall during the rebuild and pandemic.“These airmen have navigated numerous stressors very professionally and kept the mission going,” said Kelly. “In many areas, whether it be sortie generation, low observable statistics, or student production, they've actually exceeded what they were doing pre-hurricane and pre-pandemic. It's just a testament to the resilience of our Airmen, the leadership and authority that we've pushed down to them.”As part of that authority, the 325th Security Forces Squadron demonstrated advancements in base security with semi-autonomous robot dogs, new flight line security cameras, grappler systems and small unmanned drones that will all be used to help protect the base. Along with becoming the “Installation of the Future” Tyndall is poised to start receiving the F-35A Lightning II aircraft in the next few years, Kelly was briefed and shown the future layout of the installation to be the next home of 5th generation fighters.“As we go forward to bring in the F-35s, there's a specific amount of personnel, infrastructure, resources, schooling, dining options and other components that need to be in place as we bring that new capability on,” said Kelly. “Even though the wing is still building the infrastructure out, they're operating, conducting Checkered Flag and our WSEP [Weapons System Evaluation Program] program without missing a beat. It's an impressive orchestration.”Due to Hurricane Michael, the 325th Operations Group and 325th Maintenance Group are operating out of Eglin AFB until facilities are available at Tyndall to house the full-time needs of 5th generation fighter aircraft. While acknowledging the potential risk factors of traveling to units during the pandemic, Kelly stressed the importance of understanding the Airmen’s perspective and seeing teams operate in their own environment.“We want to put eyes on, to see what Airmen are doing, where they work, where they live, where they dine, where their families go to school and where they set their roots,” said Kelly. “You're only going to do that by getting out and going face-to-face with them to hear their successes and equally hear their challenges.”In addition to seeing the rebuild, Kelly received an inside look at what Team Tyndall is doing to maintain mission readiness by speaking with maintainers on current innovation programs that are cutting down repair times. He was also able to see the 43rd Fighter Squadron and adaptions in training in order for Tyndall to produce F-22 fighter pilots and continue to project unrivaled combat airpower.“What’s going on around the globe right now, whether it be security challenges in and around Iran, the Asia-Pacific or Russians around Ukraine, those all need combat power at the speed of relevance, and an Air Force is essentially going to be the only one that provides it,” said Kelly. “When you're talking about a peer-adversary, the only thing that's going to really deter is credible combat power. Places like Tyndall and Eglin that bring F-22s are something that an adversary notices, because they know that we're not trivializing the challenges they're presenting us and we're bringing non-trivial solutions to pretty serious problems.”While Team Tyndall takes on the challenges the world continues to present, the innovation and advancements from Airmen will continue to pave the way for the Installation of the Future without any negative impacts to projecting airpower. Kelly emphasized that he was impressed by the progress the wing has made in spite of challenges like Hurricane Michael and COVID-19.“The lessons that they've come up with are just phenomenal,” said Kelly. “We're going to have to take the spirit of this team and apply it across the Air Force when we face other unfortunate events like that.”

Tags:  why drones are the future