Biden must act now to better arm Ukraine. Here’s what that should look like. 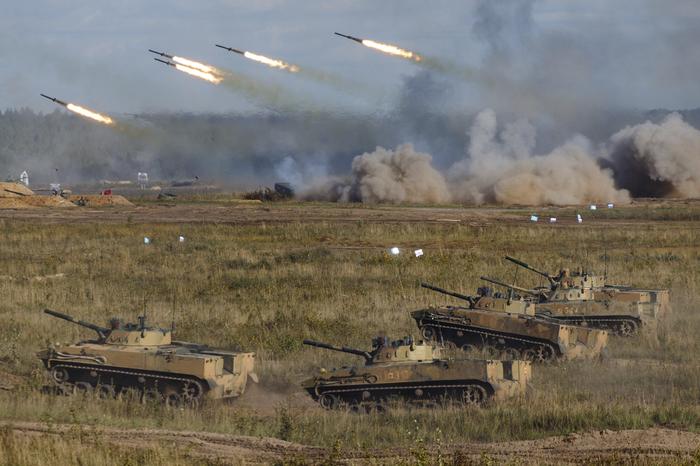 As Russian President Vladimir Putin continues to add troops on Ukraine’s borders in preparation for a potential large-scale military operation, the Biden administration is reportedly weighing whether to provide additional defensive weapons to Ukraine. This should not be a difficult decision for the White House. The administration should be moving heaven and earth to urgently provide Ukraine — a beleaguered democracy pleading for American help — with the weapons and other support it needs to deter a Russian offensive by increasing the costs of aggression for the Kremlin.

Hoping to prevent a Russian offensive, U.S. President Joe Biden has tried offering Moscow a diplomatic offramp while warning that a renewed Russian invasion would trigger harsh Western sanctions, a strengthened force posture on NATO’s eastern flank and a dramatic increase in U.S. defense assistance to Ukraine. That assistance could include support for a potential Ukrainian insurgency against Russian occupation forces.

Unfortunately, these warnings alone may well fail to deter Putin. Moscow has gone to considerable lengths to reduce the Russian economy’s vulnerability to sanctions. Putin likely expects that Western countries will forgo their toughest sanctions options if push comes to shove, fearing blowback on their own economies, and Moscow will surely seek to play on divisions within the trans-Atlantic alliance to weaken the Western response. Putin may also bet that Biden’s expressed desire to focus on other issues, such as China and the climate, will eventually impel the administration to seek an accommodation with Russia.

Moscow may further calculate that it can accomplish its political aims without a prolonged and costly occupation, instead using standoff strikes and a limited ground operation to force Kyiv to accept Russian suzerainty, and that similar military options would be more costly in the future.

In short, Putin may conclude that the long-term strategic benefits outweigh the costs and risks and that the time is ripe for action.

Some may ask why Americans should care. To be clear, a large-scale Russian offensive would spell disaster not only for Ukraine and Europe but for U.S. interests and credibility as well. It could be the largest military action in Europe since World War II, potentially killing thousands of Ukrainians, destabilizing Europe by sending millions more flooding westward, and harming the global economy as energy prices surge and markets react to a war in Europe.

US boosts military aid to Ukraine as Russia tensions soar

“We’re now at a stage where Russia could at any point launch an attack in Ukraine,” White House press secretary Jen Psaki said Tuesday.

An unstable Europe forced to contend with an aggressive and revisionist Russia will be less capable of joining the United States in addressing other major international challenges, such as the increasingly aggressive behavior of China.

More broadly, supporting Ukraine is about defending the post-war rules-based order in Europe that has been so beneficial to Americans and our European allies.

Putin has paired his troop buildup with demands that Washington and its allies accede to a Russian sphere of influence over neighboring countries, including by forswearing potential Ukrainian membership in NATO. Moscow’s efforts represent a direct challenge to the core principles underlying the existing security order in Europe, which Putin seeks to replace with a might-makes-right model whereby Russia is free to bully its smaller neighbors. Such a system would render Europe — home to top U.S. allies and trading partners — less secure, less prosperous and less free.

Moreover, advocates for an increased U.S. focus on China and the Indo-Pacific region should be extremely concerned that a weak U.S. response in Ukraine could undermine efforts to deter Chinese aggression against Taiwan or elsewhere. The time and resources the U.S. would be forced to spend on security challenges in Europe is an important reminder that it is cheaper to deter aggression than deal with its aftermath.

So what’s to be done?

The first step is to recognize that time may be running out. The situation around Ukraine is growing increasingly dire. Russian forces continue to flow toward Ukraine, including into neighboring Belarus, adding to the roughly 125,000 troops already perched on Ukraine’s borders and in illegally occupied Crimea and Donbas. Meanwhile, Moscow has begun withdrawing diplomatic personnel and their families from Ukraine, and U.S. and Ukrainian intelligence warn that Russia is laying the groundwork for potential false-flag attacks that Moscow could use as a pretext to attack Ukraine. The White House warns that Russian forces are now prepared to attack “at any point,” and that the offensive could begin between mid-January and mid-February.

Second, the Biden administration should do now what it should have done in November when indications of an invasion emerged: Move with a sense of urgency to provide Kyiv with additional defensive weapons and other support. The goal should be to help Ukrainian forces survive Russia’s initial air and missile assault, and to make clear to Putin that Russian forces would suffer major losses during an invasion and potential follow-on occupation.

Following pressure from Congress, the Biden administration reportedly has authorized America’s Baltic allies to rush U.S.-made weapons such as Javelin anti-tank missiles and Stinger man-portable air defense systems to Ukraine. The administration itself will begin shipping $200 million worth of Javelins, ammunition, medical supplies and other materiel to Ukraine in the coming days and weeks.

Much like with the Obama administration in 2014, Biden’s hesitation stems from a desire to avoid provoking Putin, based on a misdiagnosis of how the Kremlin leader views concessions. Biden should fully reject that flawed approach and take urgent steps to better arm Ukraine now — before the invasion occurs. Admittedly, some of these efforts will take time, but there are opportunities to expedite delivery.

If the United States is unable or unwilling to provide these capabilities, Washington should unambiguously signal support for allies to do so and should facilitate their efforts. In addition, Washington and its allies should help ensure Ukraine’s armed forces have sufficient ammunition, including by providing access to U.S. and NATO stockpiles in Europe as needed. And all equipment originally destined for Afghan forces should be immediately diverted to the Ukrainian military.

Putin should see American and other NATO cargo aircraft landing every few hours, offloading defensive weapons that will make any new invasion of Ukraine increasingly costly. These flights should stop only when Russian troops temporarily deployed near Ukraine’s borders return to their permanent garrisons.

Beyond weapons, Washington should also provide Ukraine with actionable battlefield intelligence, something the United States did not do following Russia’s 2014 aggression against Ukraine. In addition to enabling Ukrainian forces respond more quickly to a Russian offensive, such intelligence could also help Ukrainians disperse ahead of incoming air or missile strikes, as Dara Massicot of the think tank Rand has noted.

She also rightly argues that Washington should consult with Kyiv “on dispersal plans for Ukrainian air defenses” and on “hardening plans for other critical facilities,” which “will almost certainly be primary and early targets for Russian strikes.”

An authoritarian bully is threatening a beleaguered democracy. Fundamental democratic principles and national security interests are on the line. In a joint op-ed in 2014, the top Democrat and Republican on the Senate Armed Services Committee called on the Obama administration to provide “weapons to help Ukraine’s troops defend their nation.” That was the right bipartisan policy then, and it is the right bipartisan policy now.

Bradley Bowman is the senior director of the Center on Military and Political Power at the Foundation for Defense of Democracies, where John Hardie is a research analyst and Jack Sullivan is a research associate.

Empower our Space Force, just as we do for the other armed services

We need to look at what the Army, Navy, Air Force and Marine Corps demand to get their jobs done, and then resource the Space Force with equivalent capabilities.

The role of AI in open source intelligence

The administration needs a grand strategy that looks beyond potential sanctions and asks what elements comprise a posture that protects the security interests of the West and Ukraine, while satisfying Vladimir Putin’s desire to leave behind a legacy that in his mind makes Russia great again.

What is 5G? An electrical engineer explains.

The Forge software factory is in need of stable resourcing

Congress needs to snatch victory from the jaws of technological defeat by committing to stable resourcing and leadership support for the solutions this capability generates.