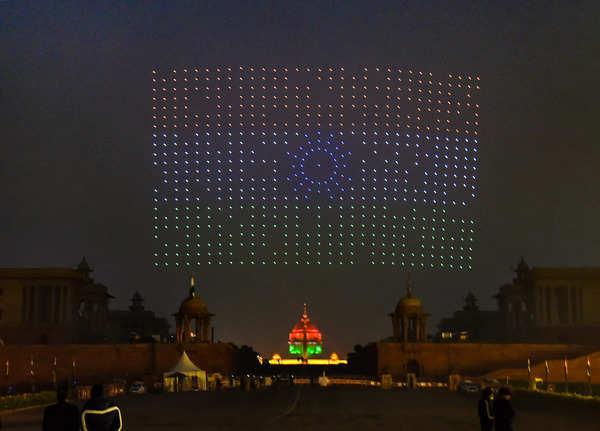 On January 29, as the centuries-old military tradition of troops retreating, from the battleground at sunset, comes alive at Vijay Chowk, the visitors to Beating the Retreat ceremony will be dazzled with something rather modern. For the first time ever, the sky above Rashtrapati Bhavan will be filled by an eight minute long light show, which will be created using 1,000 drones developed by a homegrown start-up by two 31-year-old alumni of Indian Institute of Technology Delhi.

Incubated at the Indian Institute of Technology Delhi, the startup named Botlab Dynamics is helmed by Tanmay Bunkar and Anuj Barnwal. Busy preparing for the show, which will mark the culmination of this ceremony, Bunkar — a 2014 batch graduate of the tech institute — shares, “We’d be celebrating all aspects of what India has achieved in the last 75 years, and how it will progress. We’ve been creating this technology since 2016, and it will definitely be a big boost to technology in India. By seeing the hard work we’ve put in, I’m sure people will take it seriously that if we invest in technology, there are returns, and certainly some light at the end of the tunnel.”

Barnwal informs how the team has been practising rigorously for the big day since a month now. “It’s the first time something like this is happening. We have been testing our drones every day for the last one year,” he says, explaining, “The drones are programmed to have 16 million colours, as many as the modern laptops have. They will change colours during the show, to form artistic patterns in the sky. There will be very engaging music during the formations, which will surely make it an audio-visual delight.”

Recalling how he began working on the concept of drones, Bunkar says, “I met Anuj on my very first day of college; he was my roommate. We were part of the engineering physics batch. Initially, I was trying to make these guidance computers, and I was the first person in IIT Delhi to make a drone. The most expensive part of any system is the electronics. In 2012, we flew the first such copter in the campus. Initially, these drones were very limited in what they could do, and were nothing but glorified toys. As you try to make them more capable, in terms of longer flight time or capability of carrying loads, they become prohibitive in terms of cost. We decided that a large number of these smaller, simpler systems can be networked and made more effective.”

The two have largely worked with defence forces in the past. And recalling this one time when the drones completely shut down during a showcase, Bunkar says he decided to make the drones with homegrown parts. “You have to have control over your hardware. Till now we were using off-the-shelf, imported hardware. Agar aapka ek component fail ho jata hai, then the best you can do is replace it and pray that the alternate combination works. But praying is not a scientific way to find a solution! The problem is that India doesn’t have a very mature system of making hardware. But we decided that even if it’s harder and it takes longer, it’s how we will grow. So we made the flight controller and GPS modules on these, which are now designed at IIT Delhi and fabricated at Manesar.”

The technophile recollects how he got in touch with people making circuit boards for phones, and for plastic injection moulding he approached people who make broom handles and fruit baskets. Bunkar says, “Those people have made the body of the drones out of plastic. There is so much untapped potential in India, we just need to show some trust. Just relying on some Chinese maker is not going to bring anything! Very soon, about 90% of the drones would be made in India, and then the world will see our tech prowess.”

SHARE THIS ARTICLE ON
Tags:  can you fly drones in cities