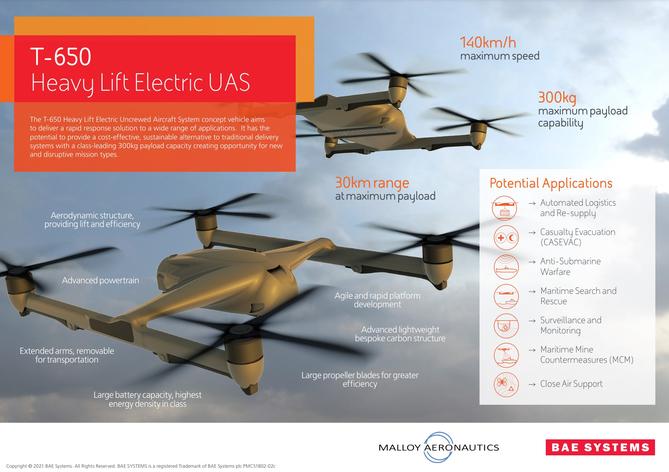 LONDON – BAE Systems is moving into the quadcopter drone sector in a collaboration with drone maker Malloy Aeronautics to produce an electric-powered vehicle capable of lifting loads up to 300kg.

The two companies used the DSEI show here to announce plans for a concept vehicle exploring the potential of a battery-powered, vertical-takeoff-and-landing drone capable of carrying stores, weapons, sensors and even a life raft for maritime rescue.

The vehicle, hanging from the rafters of the Excel Centre above the BAE stand, was displayed carrying a Stingray torpedo, but officials emphasized one of the key attributes of the vehicle was its ability to offer logistics support in military and commercial applications.

The two companies said they are looking at a concept vehicle called the T-650 offering a top speed of over 140 km/h with a range of over 30 km when carrying its full load capability of 300kgs.

A test bed vehicle is expected to make its first flight from BAE’s Warton aircraft manufacturing and development site in the second half of next year. Dave Holmes, the advanced projects, technology and manufacturing director for BAE Systems’ air sector, said the first vehicles could be in the hands of customers by 2023.

It’s a potentially a significant move into the drone sector for BAE. The company spent millions of Pounds developing various drone designs like the Mantis, gaining considerable experience along the way in technologies such as autonomous systems without achieving commercial success.

The T-650 is not the first time BAE has dipped its toe in the unmanned air vehicle sector in recent years.

In 2018 it struck a deal with British company Prismatic to help develop the solar electric vehicle known as the PHASA-35.

That high altitude, long endurance vehicle has the potential to fly for months conducting reconnaissance and other missions.

Now though company has turned to vertical-take-off-and-landing vehicles, with executives reckoning a sustainably powered drone with a wide range of applications could be a game changer.

Holmes declined to say whether the two companies had already turned their minds to scaled-up versions of the T-650, but his response appears to suggest the way ahead is for bigger machines.

“Our broad ambition is to deliver military effect efficiently while maintaining a low carbon footprint. That’s going to demand a variety of solutions so the space we are exploring is our first move on the board,” said Holmes.

“Bringing together Malloy’s proven track record of innovative technology in this field, with our understanding of the military operating environment and extensive engineering and systems integration experience, will enable us to develop a sustainable and cost-effective solution for military and commercial customers,” said Holmes.

Malloy, based near London, first entered the drone sector by designing a hovering motorbike to replace helicopters herding cattle in Australia.

Now the company’s products, including a battery powered vehicle capable of lifting 180kg payloads in excess of 70 km, has already drawn interest from the U.S. and U.K. militaries, including the Royal Marines.

The companies said in a statement they are exploring opportunities to collaborate on capability, design, manufacture and marketing of the concept vehicle.

Holmes says the companies skills are complimentary. “Malloy brings capability around the package while we bring ruggedized know-how and the ability to get into the user community,” he said.

Andrew Chuter is the United Kingdom correspondent for Defense News.

Congress is keen to support Ukraine as the country tries to fill an air and missile defense capability, and lawmakers want to know how the Pentagon can help the ally.

Britain’s upcoming ships could feature new hulls and redesigned propellers and fins, as the Royal Navy races to play its part to build a more sustainable force over the next three decades.

British Army’s land industrial base strategy due out this year

Potentially to be delivered this year, the British Army is figuring out its Land Industrial Base Strategy to align with its modernization goals.

Tags:  how to make a drone quadcopter