Autonomous drones may be the ultimate scarecrows for pigeons 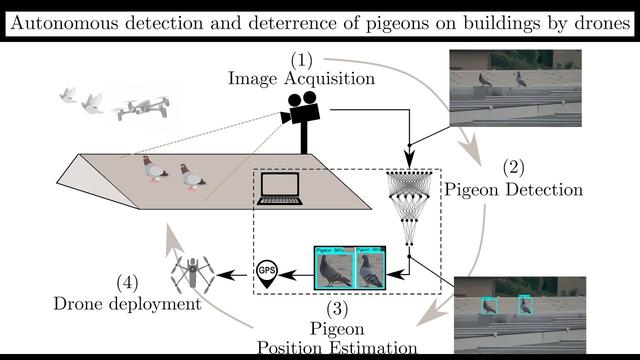 Much as we may like pigeons, they can make quite a mess of buildings and other structures, potentially posing a health hazard. According to new research, autonomous drones may be ideal for harmlessly chasing the birds away.

In the recent study, a team at Switzerland's EPFL research institute started by installing a weatherproof pan-tilt-zoom video camera on the roof of the EPFL SwissTech Convention Center. The building was already known for attracting large numbers of pigeons, which cover the roof with droppings that frequently have to be washed off.

Over a period of 21 days, the camera was used to observe the amount of time that pigeons typically stayed on the roof. Utilizing a neural network that was running on a linked ground station computer, the camera was also able to detect where and how many pigeons were present – it could even estimate their GPS coordinates.

After the three-week period, a Parrot Anafi quadcopter was added to the mix. Over the course of five days, whenever the camera spotted pigeons on the roof, it relayed their location to the drone. The aircraft then took off, autonomously flying to the area and then hovering in place, chasing the birds away. Due to safety regulations, a human operator had to authorize each takeoff, although this hopefully won't be necessary once the system is developed further.

Over the five-day period, the drone was automatically deployed a total of 55 times. Doing so was found to significantly reduce the amount of time that pigeons stayed on the roof, and to reduce the number that landed there in the first place.

The system is described in a paper that was recently published in the journal IEEE Explore, and can be seen in use in the video below.

Autonomous Detection and Deterrence of Pigeons on Buildings by Drones

Tags:  how to make a drone quadcopter