Abide With Me hymn missing from Beating Retreat lineup 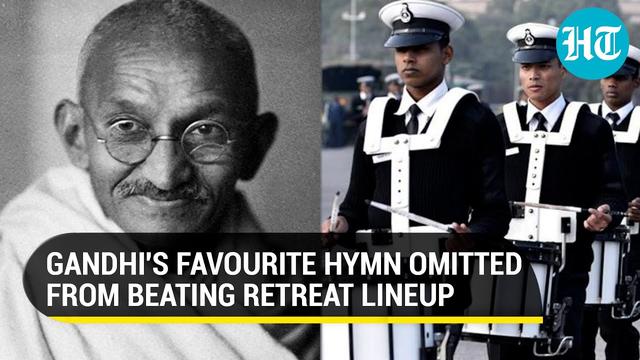 Abide With Me, a decades-old staple tune at the Beating Retreat ceremony and said to be a favourite of Mahatma Gandhi, does not figure in the lineup announced by the government on Saturday for the January 29 musical extravaganza that will feature a raft of military bands marking the end of Republic Day celebrations.

The Christian hymn, composed by Henry Francis Lyte in 1847, finds no mention in an Indian Army hand out released on Saturday with details of the ceremony, staged on the eve of Gandhi’s death anniversary.

This is the first time the hymn will be dropped. There were plans to not feature it in the ceremony in 2020, although it was restored at the last minute after reports of it being left out led to a controversy.

“Soldiers relate to Abide With Me as it has been a part of our military culture. The tradition should continue,” said former director general of military operations Lieutenant General Vinod Bhatia.

A defence ministry spokesperson did not comment on why the composition has been omitted in the 75th year of India’s Independence, a move that could trigger a fresh political row on the back of the eternal flame controversy.

The eternal flame, Amar Jawan Jyoti, at India Gate was extinguished on Friday after 50 years and merged with the flame at the adjacent National War Memorial (NWM), amid political finger pointing over the move aimed at creating a single site for paying homage to India’s fallen heroes and conducting all ceremonial functions.

Beating Retreat has traditionally ended with Abide With Me. This year, military buglers will play the iconic patriotic song Sare Jahan Se Acha in the end. The other popular tunes that will be played at the ceremony include Kadam Kadam Badhaye Ja, Ae Mere Watan Ke Logon and Hind Ki Sena.

Beating Retreat will feature bands from the Indian Army, Indian Air Force, Indian Navy and Central Armed Police Forces, apart from buglers and pipes and drums bands. The ceremony involves the lowering the flags against the backdrop of the setting sun and a simultaneous lighting up of the Rashtrapati Bhawan, South Block, North Block and Parliament House.

A new show with 1,000 drones is expected to add sparkle to Beating Retreat. It is being organised by a startup, Botlab Dynamics, supported by Indian Institute of Technology Delhi and the department of science and technology. Only the US, Russia and China have the capability for a show with 1,000 drones, officials have said.

The government on Saturday also released the schedule of the 73rd Republic Day Parade, India’s biggest ceremonial event that is being conducted in the shadow of the third Covid-19 wave and will be witnessed by fewer spectators at Rajpath.

The Indian Army’s participation in the 90-minute parade will include a mounted column of 61 Cavalry (one of the world’s last remaining horse-mounted cavalry regiments), 14 mechanised columns and six marching contingents, apart from Param Vir Chakra and Ashoka Chakra awardees.

The parade will begin at 10.30am, instead of the traditional timing of 10am, for better visibility to the parade and the fly past. The fly past, consisting of 75 aircraft in India’s 75th year of Independence, will feature flying formations to commemorate some glorious moments of India’s decisive victory over Pakistan in the 1971 war, including the historic Tangail airdrop and the Meghna heli-borne operation.

Vintage army equipment to be showcased during the parade includes the Centurion tank that took part in the 1971 India-Pakistan war, OT-62 Topas armoured personnel carrier and the 75/24 Indian field gun, alongside modern tanks, infantry combat vehicles and artillery guns.

The blend of old and new equipment seeks to demonstrate the army’s evolution over the years, as was done during the Army Day parade on January 15. The Republic Day parade will feature a total of 16 marching contingents, including those from the IAF, navy and paramilitary forces, and 25 tableaux of various states, government departments and the armed forces.

The Indian Navy’s tableau will depict the naval uprising of 1946, which contributed to India’s struggle for independence, said Lieutenant Mayank Bhagour. It will also feature models of the indigenous aircraft carrier Vikrant, the light combat aircraft and some warships.

Before the parade starts, Prime Minister Narendra Modi will lead the country in paying homage to India’s fallen braves at NWM, a monument dedicated to soldiers who fell in post-Independence wars and operations. The memorial was inaugurated by Modi almost three years ago, on February 25, 2019. As on date, the names of 26,466 brave warriors are inscribed on the memorial, including the ones who fell in the 1971 war.

The spectator count at the parade will be massively curtailed this year due to Covid-related restrictions, with only 5,000 to 8,000 people to be allowed entry to Rajpath to witness the display of the country’s military might and cultural heritage.

Only fully vaccinated adults and single vaccinated children of age 15 and above will be allowed entry.

The January 26 parade was attended by around 25,000 spectators amid the ebbing first wave last year, compared to around 125,000 people who would usually showed up at Rajpath to watch the event in the pre-pandemic era.

SHARE THIS ARTICLE ON
Topics
republic day
Tags:  are drones allowed in india