A drone tour of Shanghai’s “Hanging Gardens of Babylon” building 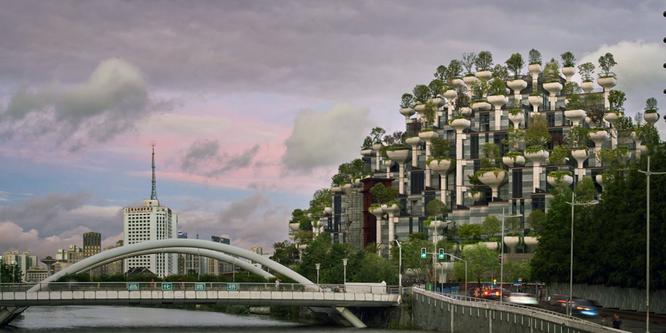 It’s officially known as the 1000 Trees building by Thomas Heatherwick’s studio, but the Shanghaishopping center recalls an ancient wonder. Take a drone tour of the “Hanging Gardens of Babylon” building.

1,000 Trees looks impressive from just about any angle, but this drone tour of the building really shows how effectively the trees crown the 1000 columns that give the building its name.

The nine story building just opened in Shanghai, delighting residents with its greenery – as many as 100 thousand people visit daily. There are about 70 different types of tree sprouting from the columns, as well as an estimated quarter million other plants that keep the building looking healthy.

“Mixed developments with shopping and restaurants can weirdly sterilise places in spirit. We didn’t want to be the people that built a big cheesy wall next to the main art district. To me, integrating nature is a very affordable way to get complexity and movement into the facade.”

Drone tour of the ” Hanging Gardens of Babylon” building

The drone footage also shows off one of the street walls, designed as an exhibition space for graffiti artists. Heathterwick says placing the trees at the top of the columns makes sense because of the weight of the trees and soil.

“The best possible place if you want something heavy on top [of a building], is to put it on top of the column, don’t put it on the beam, then that load goes straight to the foundation. So there was an efficiency to that,” says Heatherwick.

You can see the project coming together here – check out the interiors and the building at night.

As we’ve reported, China is certainly adventurous when it comes to building. Check out it’s full sized re-creation of the Titanic, this giant ride, and this building that looks like the Starship Enterprise.

Tags:  how to build a drone