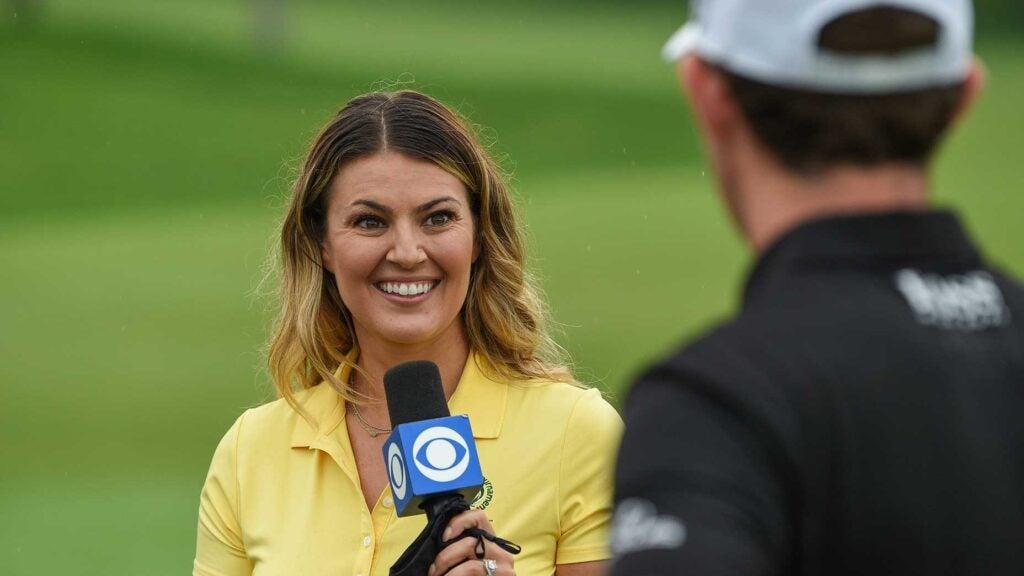 Not much has changed about CBS Golf in the last year. Jim Nantz’s dulcet tones still steer the ship from the 18th tower, where Nick Faldo and Ian Baker-Finch offer insightful quips from nearby. Out on the course, a group of reporters led by Dottie Pepper whisper insights from inside the ropes, while Amanda Balionis handles pre and post-round interviewing duties.

But of course, those of us who’ve actually watched CBS over the last year know just about everything has changed, and that’s largely thanks to Sellers Shy.

The third-ever coordinating producer of Golf on CBS had a hurricane of a first-year in his new gig — an effort atop CBS’s golf coverage that concluded in a broadcast … from the middle of a hurricane. He assumed the mantel of golf’s most historic throne in January with a plate full of new ideas and an audience ravenous to dig in. Shy might have been a CBS lifer, but his first moves quickly upended the on-air product, modernizing its look by adding new graphics technology, introducing a new theme song, and dragging the network’s golf coverage into the 21st century through drones and augmented reality.

His efforts as the season progressed were punctuated at the Memorial Tournament, where Shy reversed course in the dying seconds of the show to cover Jon Rahm’s stunning Covid diagnosis, creating an additional half-hour of coverage largely from thin air.

In 2022, golf viewers can expect the change to continue from CBS — albeit more tamely than in 2021. In Shy’s second year, the network has a host of shifts planned for its golf coverage, most of which will be visible to the viewers during next week’s Farmers Insurance Open, the network’s first broadcast of the calendar year.

One of the biggest changes to CBS’s product in 2022 can actually be traced back to ESPN. In the new year, the PGA Tour has made the executive decision to assume control of all ‘below the line’ facilities — TV towers, mobile camera units, technical facilities, etc. Whereas previously, networks would be forced to book the facilities, under the new agreement, that work will be left to the Tour. The shift comes as part of the Tour’s new streaming rights deal with ESPN+, which dramatically expanded the overall coverage offerings.

Of importance: technicians for each individual network will still be responsible for operating the equipment, and the networks will maintain complete control over the production of each broadcast. According to CBS Sports chairman Sean McManus, the decision was made with the goal of streamlining broadcast setup efforts from week to week.

“The thought was to combine the resources of all those different feeds and have the Tour provide them,” McManus said. “It seemed like a very efficient and good way to move forward. However, our production lineup is the same as it was last year. The technicians who’ve been doing golf with us for so long, they’ll all be coming back. It’s just that we will not be booking the actual facilities that are being used. But you won’t see anything different on the air. We’ve worked hand in glove with the PGA Tour to make sure that this will be a will be a smooth transition. The equipment levels are actually probably going to be larger than they were in 2021. So the fans sitting at home will have no idea that anything is changed. The product is still going to be every bit as good as it’s always been.”

One of Shy’s biggest changes in 2021 was the expanded addition of drones to CBS’s broadcast arsenal. Those cameras helped to produce some of the best shots of the season (including a laugh-out-loud moment with Phil Mickelson at the PGA Championship), and serve a vital role in expanding the viewer’s perception of each week’s venue. According to Shy, drone coverage will be expanded even further in 2022 as part of an overall increase in the number of cameras at each event.

As for the rest of the technology offerings, Shy and co. have worked to improve Toptracer in 2022 by expanding the number of holes with tracer capabilities at each event.

The hallmark of Shy’s early efforts at the helm at CBS has been his implementation of a constant, mini-leaderboard. The bug — which lives translucently on the lower right-hand portion of the screen — has quickly become one of CBS’s most popular broadcast elements.

In 2022, CBS worked with its graphics department to produce a bolder, more defined look for the mini-leaderboard, in theory making it easier for viewers to follow along with the action.

Professional sports are in the midst of an analytics revolution, and so too is professional sports television. In an effort to capitalize upon that audience, CBS will expand its use of ShotLink data and other advanced statistics throughout its broadcasts, helping to provide broader context behind each shot.

The biggest golf TV promotion in 2022 belongs to Colt Knost, whose on-course reporting role with CBS is expanding into an every-week endeavor. Knost, a former Tour pro and current host of GOLF’s Subpar podcast, has earned high marks from TV viewers (and some pros) for his insightful analysis and extensive relationships within the pro game.

Golf fans can wish a tearful goodbye to Amanda Balionis’ on-course cart in 2022. It has been shipped off to the metaverse, where it will be replaced by an augmented reality set — a space-age update that opens the door for tons of creative applications. The good news: players need not fear, Balionis will still have a physical set on-site at most events (what Shy calls an “A/B set”) to conduct pre- and post-round interviews.

'It can change people's lives': Why Torrey Pines' *other* event this week could be so impactful

2022 Farmers Insurance Open live coverage: How to watch Round 3 on Friday

James Colgan is an assistant editor at GOLF, contributing stories for the website and magazine on a broad range of topics. He writes the Hot Mic, GOLF’s weekly media column, and utilizes his broadcast experience across the brand’s social media and video platforms. A 2019 graduate of Syracuse University, James — and evidently, his golf game — is still defrosting from four years in the snow, during which time he cut his teeth at NFL Films, CBS News and Fox Sports. Prior to joining GOLF, James was a caddie scholarship recipient (and astute looper) on Long Island, where he is from.

Tags:  do i need drone insurance