The Real Versus the Beautiful (Part 4): The Future of Photography and the Moral Compass 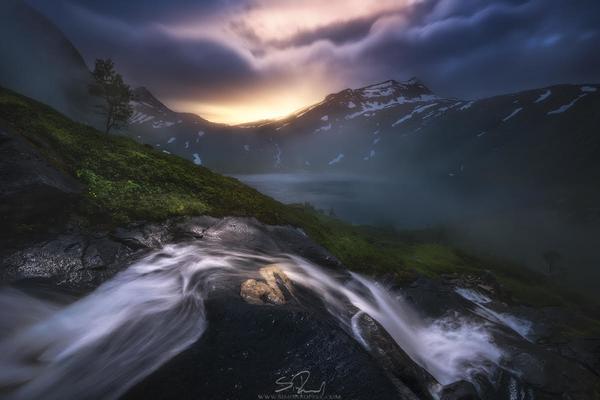 The previous article about the processed image ended with similar arguments both for and against digital manipulation, and the artist’s disclosure of such actions. But how does the motivation for creating art through both photography and creative editing arise? I’ve gathered a panel of fellow international landscape photographers to expatiate on the power of the processed image. Professional landscape photographers Ryan Dyar, Felipe Gómez, and Simon Roppel are here to help us understand why certain decisions in editing process are made, as well as in the field.

A Round Table of Landscape Photographers

Everyone at the table knows about Marc Adamus catching a lot of flak for his art. In fact, all of us sometimes get the axe in one form or another. With Simon Roppel just coming back from a shoot at Mount Assiniboine in Canada, we started with the issue of compositing images; superimposing one photo with another in order to create a more pleasing image. Roppel often uses a technique called time stacking, in which he takes one shot at dusk and another later in the evening to get the best of both worlds. He thinks it’s a great thing that digital processing allows us to do. Roppel doesn’t understand the resistance that rose up against Adamus’ imagery. “It’s all art,” Roppel explains in deceitful simplicity. Eventually we are all trying to create something beautiful and emotional. Capture techniques as compositing images or time stacking just don’t trigger the emotional response we are looking to illicit.

Roppel was left with a boring, colourless sky when he captured his work “Slow Motion.” And while he typically doesn’t like to fake light, he does frequently want to improve upon it. This example is different with the decision to give the sky some colour where in actuality there was none.

Gómez agrees and adds that art is supposed to free us instead of confine us to the bounds of collective appreciation. He does struggle with finding the words to describe this new form of photography. Is this even photography at all? Gómez prefers to call it art either way. And beautiful art at that. Dyar definitely leans more towards the creative side of this argument. The strict, straight-out-of-camera purist side isn’t his way of creating art. He uses time stacking as well. For example, the stars in his work “Night Watch” were photographed about an hour after the exposure he used for the foreground areas. He put them together in post-processing using a Lighter Color blend mode. This way, you can prevent having to dial in a higher ISO that will lower the quality of that foreground.

But in another photo; “Goat Crossing”, people often ask if those goats were real or a composite. Dyar wouldn’t feel comfortable with making such a composite and prefers keeping such elements real and natural.

The Onset of Something New

Ted Gore and I talked in a previous episode of this series about the use of bracketing exposures to capture a wider dynamic range. While camera’s today are doing such a great job at capturing high contrast scenes in single exposure, multi-exposure blending is neither new, nor digital.

Charles Wyckoff made images of nuclear explosions that got published in all sorts of magazines like Time and Life, well before the dawn of Photoshop. Ansel Adams was the landscape photographer’s king of photo manipulation, and he is revered as one of the greatest photographers who ever lived. His “zone system” is basically dark room (film) HDR, in which he sought to show detail in shadows and highlights as he saw fit.

U.S. nuclear weapon test Ivy Mike, 31 Oct 1952, the first test of a hydrogen bomb. This is a photo by Charles Wyckoff of the fireball a few microseconds after detonation, captured by high-speed camera. The fireball measured 3 1/2 miles in diameter.

We all use all sorts and kinds of photography ‘life-hacks’ to make that stand-out work of art. We either manipulate light before it hits the sensor, or stretch the histogram in post to make it more pleasing to the eye. Using sheets of glass or resin in front of the lens too is a form of manipulation in order to let the camera record more data than it initially can with a single, unfiltered exposure. Gómez doesn’t put graduated neutral density filters in front of his lens anymore. If the dynamic range is too wide to show both details in shadows and highlights, he instead shoots two images at different exposures and blends them together in post-processing. Gómez applied a simple blending technique like this in his seascape “Easter Island”.

“It's a wonderful day to be yours” by Felipe Gómez 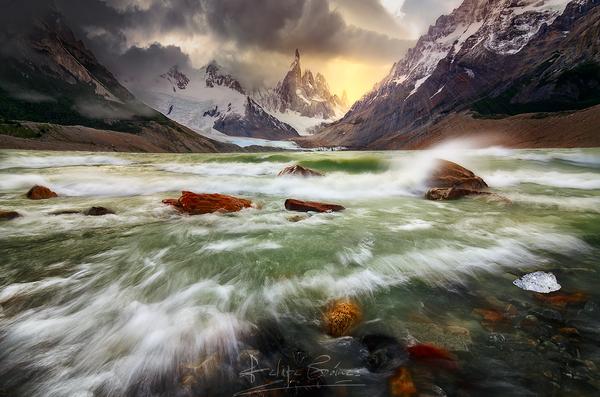 Dyar uses the same technique in scenes of extreme contrasting light. He stacks the images as layers in Photoshop, throws a mask on the top one and paints in the brighter or darker exposure by hand. This sometimes leads to unsightly haloing, but with targeted luminosity selections, he dodges and burns to correct that.

Many consumer grade cameras and smartphones alike, come with HDR camera modes today. By rapidly firing a couple of shots using an electronic shutter at different exposures, the camera takes mere seconds to blend them together. It’s interesting to note that this technology starts to become mainstream. Do the professionals and their experimentation with capture and processing techniques have any causal connection with this technology becoming available for the masses? I think that as the professionals start to experiment more, demand more from their equipment and do more in less time, it is this technology that then starts to percolate down into the consumer market. But there’s also a feedback loop. Slowly but surely, features will be put into professional gear as well.

The (r)evolution of photography

In the years to come, cameras will be enabling photographers to do even more after we press the shutter button. We will be able to make decisions about selective depth-of-field and perspective blending, as the multi-lensed camera of tomorrow promises to record much more information than can be shown on any print or any screen at a certain point in time.

Roppel could be excited about such technology. “Sometimes focus stacking is just the thing you need to do in order to get tack-sharp images front to back.” While there are tools available that help you in this process, the technology to actually capture it all in one image is dawning. A couple of years from now, and the DOF-slider is as commonplace as the white balance slider. The Lytro Illum light field camera already set the stage for an entirely new way of looking at photography and there are trends on the horizon that will certainly have us talking about new and exciting gear to fill our camera bags in the near future.

Felipe Gómez will be pleased with advancements such as light field technology. He points out that you have to be very attentive to capture the DOF that you're after in a landscape image. In a picture where there is a very close object like a flower or rock, it's crucial to use the stacking technique to get everything in focus. And the diffractive effects of f/22 are actually detrimental to image sharpness. It would be great when the lens’s sweet spot can be used over and over again for the most sharpness and least amount of optical aberrations. Capturing the same composition with multiple lenses at once has another benefit. Perspective blending is a great way to deal with the problem ultra wide lenses are creating, Simon Roppel notes. He used perspective blending a couple times before to avoid pincushion distortion. Especially with mountain scenes, in which you need a big foreground and want the mountains to stay as big as they should. Again, that’s a matter of taste, Ryan Dyar adds. “That really just depends on the scene and what I'm hoping to achieve.” Perspective blends can be great, but as with blending for added dynamic range, forcing a technique on a scene that doesn’t really need it, is not good practice. Technology should be in service of a photographer’s artistic choices; not the other way around.

With technology coming to the aid of the photographer to capture more data to work with, the pros will still be doing things manually for a long time. End even when professional grade cameras with such features start hitting the shelves, the pros will still be experimenting with any advancements that are at our future disposal. It’s in our nature as artists.

Hardship and the Creative process

Don’t be afraid that computers will be in charge of the creative process in the future. Tomorrow’s technology will just capture more data and creative decisions will still left to the artist. Felipe Gómez let his camera capture four different exposures to capture the dynamic range he encountered at Cerro Torre in Patagonia. But he still decided which part of those 4 exposures made it into his work.

“A Fulfilled Dream” by Felipe Gómez

Gómez agrees with Ted Gore’s previous comment about the hardship of photography in this place. Being from Chile, he knows Patagonia to be a very dynamic and hard place to take pictures, so you don't have all the time of the world. You have to be familiar with your equipment and quick on your feet under these rapidly changing, even transient conditions that last mere seconds.

However many brackets, frames, or photographs we use to create art; a good sense of timing is still an important aspect of communicating reality through two dimensional imagery. Roppel’s “The Perfect Moment” is one of his favourites, because of such transient conditions Gómez mentioned.

“The Perfect Moment” by Simon Roppel

He composed that shot as his girlfriend convinced him to stay and wait while he was ready to pack up and leave the scene. The morning seemed uneventful to him, but boy, was she right. A combination of snow, hail and rain fell from the sky with a great sunrise from behind them. He says he never saw a show like that before and he’s happy that he captured it all on camera.

How to be a better photographer?

That brings us to the true value of the pursuit of photography. Are you selling images based on what others think of your work, or do you first and foremost shoot for yourself? And how big a part do you think that processing is of photography?

I truly believe that the near future of post-processing holds more discussion, as more and more options will open up after we press the button. It’s not the end of the debate for what is or isn’t photography, but we can start to agree upon what is or isn’t art. I think we need to get off our high horse of judgment and be more open to though-provoking imagery altogether. I see good photographers around the globe getting discouraged because of what others think and that’s a shame. Dyar agrees that it's best for each individual photographer to find his or her own moral compass and boundaries, and stop trying to force those boundaries on anyone else; whether you think composites are wrong or right.

To that effect, I also think that artists would do their selves a lot of good by not taking criticism too personal. Even if a critique is aimed at the photographer and not the photograph. A professional and welcoming approach to someone’s opinion works wonders if you reflect that criticism back onto your work of art. In the end, we are all trying to get better at what we do, whatever the means.

In the next and final episode of this series about reality versus beauty, we’re wrapping things up with two more gifted photographers who show us an otherworldly, surreal approach to photography.

All images and paraphrases used with permission of the respective photographers, Ryan Dyar, Simon Roppel and Felipe Gómez.