Table tennis is a game Nick Hains has worked hard to get good at. The 19-year-old who grew up in Traverse City has competed nationally in table tennis competitions and his talent has even earned him a scholarship to Texas Wesleyan University.

Nick began playing table tennis when he was eight years old. Both his father and brother played competitively and Nick began playing after his dad competed at a Bud Light sponsored tournament in Las Vegas and placed third. Despite being somewhat influenced by table tennis being a family affair, Nick had a natural ability with the game.

“You feel a part. You finally get to go and do it yourself, it was cool. It was something that just my dad my brother and I could do together so we have that bonding. It’s something we all share. Last year I actually beat my dad in the state finals. We always give each other crap, but he always says as a dad you want your kids to eventually be better than you.”

Nick won his first state title at, “13 or 14,” and his dad and brother were proud. Although, they were competing and winning brackets of their own at the same game.

Nick’s mother doesn’t get to attend as many of Nick’s competitions as she would like to because of work, but many of Nick’s games are live streamed and she keeps up with all of them.

“She comes when she can. She always texts me after my matches.”

Nick honed his skill with his dad and his brother at home, as well as in local table tennis groups in Traverse City.

“I started playing with them in the basement through middle school and high school and there was a club in Traverse City that I’d play at,” Nick said.

Nick and the friends he met while playing in the table tennis club would go to state tournaments and the U.S. Open, but not to Olympic-level type competing, and as far as Nick is concerned that’s the ultimate goal.

“I mean, I think it’s any athlete’s dream to represent their country. That would be cool, but school first.” 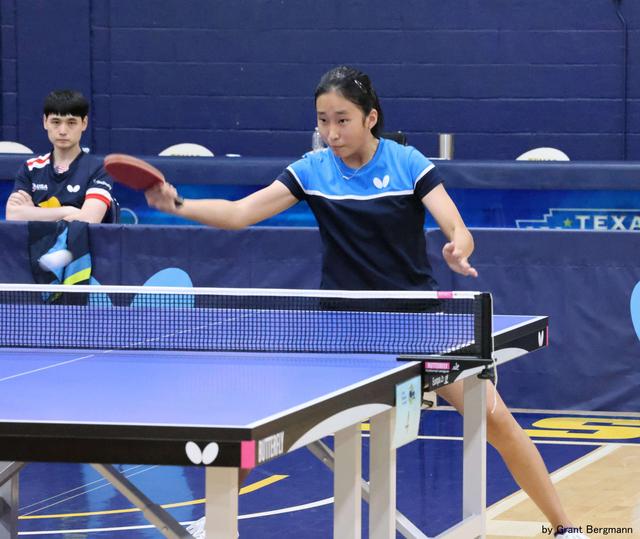 Nick studies business at Texas Wesleyan University, and he is there on scholarship to play table tennis. The school’s table tennis team won the College Table Tennis Championship this year, and Nick is the only American on the team.

Texas is a long ways away from Traverse City, but the inspiration for going to Texas Wesleyan wasn’t location based. Nick knew he was gaining momentum with his table tennis playing by the end of high school and he decided he wanted to keep pursuing it, so he researched colleges that had table tennis teams.

At the time there were only two schools in the U.S. that had table tennis programs. One being Lindenwood University in Missouri, and one being Texas Wesleyan.

“There was actually a guy from Traverse City who went to our [table tennis] club and he went to Lindenwood so I thought that’d be really cool to go there, go with him, so I applied and got a scholarship to go there.”

Nick was accepted and received a scholarship to attend Lindenwood, but three weeks before he was getting ready to go their table tennis program shut down. With two weeks left before the semester started, Nick contacted the table tennis coach at Texas Wesleyan and the coach told him they would love to have him on the team.

“I’m super grateful for it.”

Table tennis skill is based off of a rating system. If you beat a player in a game some of their points are deducted and added on to your rating. Nick attended nationals this year in Las Vegas along with 600 other professional players, and was happy to report that his player rating went up after competing.

“It was my first time being to nationals. I advanced. I was pretty happy with myself, it motivates you to do better next time.”

Nick plans on staying motivated to get better at table tennis throughout his life, and the fact that it’s a game people can play for life is one of his favorite things about the game.

The accessibility to the sport is an aspect that Nick loves, but the sport has also made him grow as a person. He said that playing table tennis has taught him a lot about time management and being sociable and gracious with his opponents. A game isn’t always going to go the way he wants it to, but he brings a positive attitude and drive to every game he plays.

“A lot of times things don’t go your way and you have to just look past it and keep moving, which isn’t just table tennis it’s kind of life, too.”