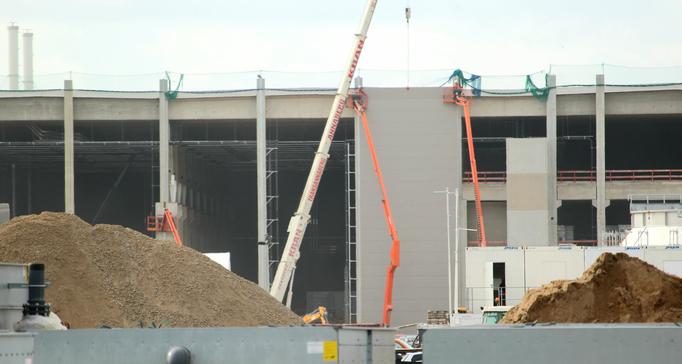 Tesla Giga Berlin’s battery factory is beginning to take shape as the first walls of the building were erected on-site earlier today.

In 2019, Tesla announced that it would build a new vehicle production facility in Europe, and it would be located in Brandenburg near Berlin. Labeled as Giga Berlin due to its close vicinity to the City, the company plans to use the factory to supply its vehicles to European customers, where electric cars have been adopted most frequently compared to other markets. The site is set to begin manufacturing vehicles later this year as the main production building where assembly will occur nears completion.

As vehicle production looms at the site, Tesla’s contracted construction crews now turn their attention to the battery manufacturing plant that will produce the new 4680 structural cells that the automaker unveiled in September 2020. After receiving preliminary approval to build the site earlier this year, the battery factory is beginning to take shape, according to new photographs shared by @Gf4Tesla on Twitter.

#GigaBerlinSeptember 22/2021++today at the construction site ++.The last still open area in the casting is now also closed.The Battery Cell building continues to grow at a rapid pace, first walls are built. pic.twitter.com/q02Q31sCGT

Tesla has not received main approval for the battery factory quite yet, but German authorities only grant preliminary approval to projects that have a substantial chance at being ultimately approved. The project has already gained rumors of financial support, according to a report from Tagesspiegel. The German media outlet reported that Tesla could receive up to €1.135 billion from the Federal Ministry for Economic Affairs and Energy, as the project could be included in the EU’s Important Project of Common European Interest (IPCEI) initiative.

Because the plant will be ready to build vehicles before the 4680 battery lines ramp, Tesla will send cells from the Kato Road facility in Northern California to Germany to support the production of the company’s electric vehicles. As of now, the 4680 cells will be included in the initial Model Y builds that will first roll off of production lines at the facility.

Upon completion, CEO Elon Musk expects the facility to be one of the largest battery manufacturing plants in the world. During the 2020 European Battery Conference last November, Musk said:

“I think it will be the largest. It would be capable of over 100 GWh hours per year of production and then possibly going to 200 to 250. I’m pretty confident at that point it would be the largest battery-cell plant in the world.”

To support the current demand for Tesla’s vehicles in Europe, the company has been exporting builds of the Model 3 and Model Y from Giga Shanghai in China to Europe. The export of these units may begin to decrease as Giga Berlin picks up production, which could supply the European market with up to 500,000 vehicles annually in its first year.