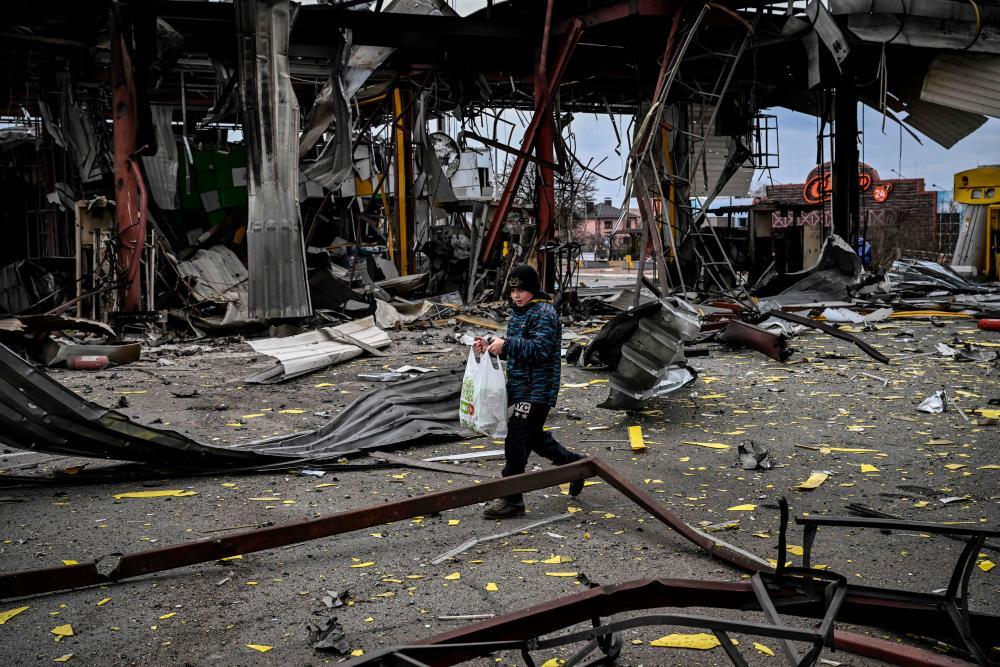 Russian forces pummeled Ukrainian cities from the air, land and sea on Monday, with warnings they were preparing for an assault on the capital Kyiv, as terrified civilians remained trapped in besieged Mariupol.

The relentless fire has pushed more than 1.5 million people across Ukraine's borders as refugees, though many others are displaced internally or trapped in cities being reduced to rubble by Russian bombardment, AFP said.

International sanctions intended to punish Moscow have so far done little to slow the invasion, and Washington said it was now discussing a ban on Russian oil imports with Europe.

The comments sent the price of Brent crude soaring to near a 14-year high, with markets in Tokyo and Hong Kong slumping.

On the ground, air sirens sounded in cities across the country, including the capital Kyiv, and intense aerial bombardment continued in the city of Kharkiv, which has endured almost non-stop fire in recent days.

"The enemy continues the offensive operation against Ukraine, focusing on the encirclement of Kyiv, Kharkiv, Chernihiv, Sumy and Mykolayiv," the General Staff of the Armed Forces of Ukraine said in a statement.

Russian forces "began to accumulate resources for the storming of Kyiv", the statement added.

In the south of the country, regional military officials said Russia had shelled the village of Tuzly in the Odessa region from the sea, targeting "crucial infrastructure sites" but causing no injuries.

In Kharkiv, Russian fire hit a university and apartment block in the northeastern city, blowing out all the windows and leaving the facade completed blackened and charred.

In the tangle of splintered wood and mangled metal strewn across the ground in front of the building lay several dead bodies next to a car.

The legs of one person, dressed in brown trousers and black boots could be seen next to a blue surgical mask alongside the back of the car, its roof caved in under the weight of rubble.

"We will not forgive, we will not forget, we will punish everyone who committed atrocities in this war on our land," he said. "There will be no quiet place on this Earth except the grave."

Twelve days of fighting have killed hundreds of civilians and wounded thousands. An unending stream of people -- mostly women and children -- has poured into neighboring countries in what the UN calls Europe's fastest growing refugee crisis since World War II.

But some have found themselves trapped, including in the southern city of Mariupol, where a second attempt to allow civilians to flee some of the worst violence of the conflict collapsed on Sunday.

Both sides accused each other of breaching a ceasefire agreement, with the International Committee of the Red Cross warning of "devastating scenes of human suffering" in the strategic city on the Azov Sea. 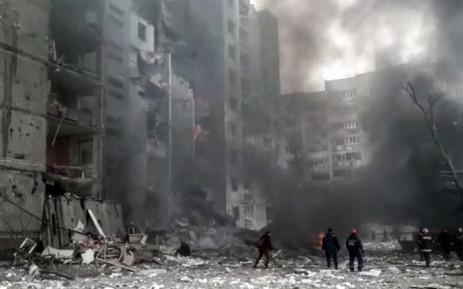 One family who did manage to leave the city described spending a week without heat or electricity and running out of food and water.

"On the road, we saw there were bodies everywhere, Russians and Ukrainians... We saw that people had been buried in their basements."

- Putin vows 'neutralization' -Meanwhile, the mayor of Irpin, a small town outside Kyiv, described seeing two adults and two children killed "in front of my eyes" when a shell hit them.

"It is impudence, they are monsters. Irpin is at war, Irpin has not surrendered," Oleksandr Markushyn said on Telegram, adding that part of the city was in Russian hands.

AFP journalists saw civilians clambering over a bombed out bridge as artillery fire sounded around them. The body of a civilian killed while fleeing lay on the road, partially covered with a blanket, next to a grey suitcase.

Western allies have imposed unprecedented sanctions against businesses, banks and billionaires in a bid to choke the Russian economy and pressure Moscow to halt its assault.

But the Russian leader Vladimir Putin has equated global sanctions with a declaration of war and warned that Kyiv is "putting in question the future of Ukrainian statehood".

Moscow has been forced to restrict sales of essential goods to limit black-market speculation, while on Sunday payment giant American Express halted operations there, a day after Visa and Mastercard announced similar steps.

Despite harsh punishments for those voicing dissent, protests in Russia against the Ukraine invasion have continued, with more than 10,000 people arrested since the operation began.

Putin has pledged the "neutralization" of Ukraine "either through negotiation or through war", and expectations remain low for a third round of Russian-Ukrainian talks set for Monday.

- Kyiv preparing for assault -NATO allies have so far rebuffed Ukraine's calls for a no-fly zone, with one senior US senator, Marco Rubio, saying Sunday that it could lead to "World War III" against nuclear-armed Russia.

Putin has threatened "colossal and catastrophic consequences not only for Europe but also the whole world" if a no-fly zone is imposed.

In the Ukrainian capital, troops have been preparing for the expected Russian assault on Kyiv, including planting explosives on what they say is the last intact bridge standing in the way of advancing forces.

If they try to cross, the Ukrainians will blow up the bridge and "sink as many enemy tanks as we can while we do it", said a fighter who gave his name as Casper.

Kyiv has urged the West to boost its military assistance, with Zelensky pleading for Russian-made planes that his pilots are trained to fly.

A barrage of Russian missiles destroyed an airport in central Ukraine's Vinnytsia, said Zelensky, underscoring his appeal for help.

Moscow has also warned Ukraine's neighbors against hosting Kyiv's military aircraft, saying they could end up involved in armed conflict.

Weapons, ammunition and funds have poured into Ukraine from Western allies as they seek to bolster Kyiv.

Blinken said Washington was "working actively" on a deal with Poland to supply it with American jets.

There are also ongoing concerns about the safety of Ukraine's nuclear sites after the Russian attack on Friday on the Zaporizhzhia nuclear power plant -- Europe's largest.

The UN nuclear watchdog has expressed "grave concern" about the situation at the plant, and France said it would include iodine tablets, which help protect against the effects of radiation exposure, to Ukraine along with other medical supplies.