Radar For Automotive: Why Do We Need Radar? 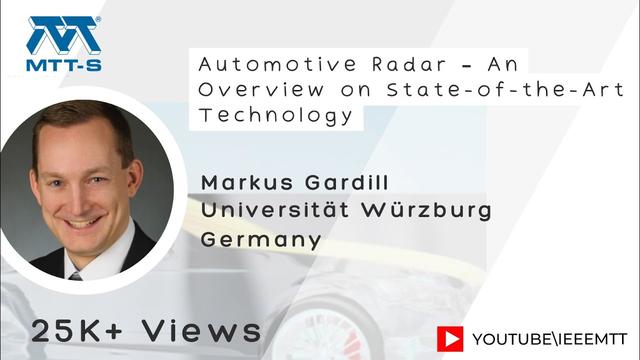 Communications and sensing technologies have transformed the automotive industry. More and more, cars include features and systems to interact with their environment, gaining awareness of the surrounding space, networking with each other and with the infrastructure, and detecting possible sources of danger. We can consider that vehicles have acquired their own “senses”: they know where they are, and can now see, hear, and feel what happens around them.

Fig. 1: Sensors, navigation, and communications: The “senses” of a car.

Automotive sensors are key to improve road traffic safety and reach levels 4 and 5 of autonomous driving. The use of advanced sensor technologies will allow prevention of accidents through warning signals and automated safety functions, and thus reaching the Vision 0 objectives: 0 deaths in traffic accidents by 2050. In this sense, the European Parliament approved in 2019 a law that makes safety features such as intelligent speed assistance, advanced emergency-braking systems, and lane-keeping systems compulsory for all new vehicles as from May 2022 for new models and as from May 2024 for existing models.

Also, safety measures have become increasingly important when buying a car. For this reason, the European New Car Assessment Programme (Euro NCAP) includes since 2020 emergency braking systems in their evaluations. This has forced the industry to increase their efforts and include new detection features in their vehicles.

Different options are available for sensing the environment around a vehicle. Yet, for fully autonomous driving a combination of different sensing technologies will be required to be able to provide full 360° detection. The full system can be seen as the “senses” of a car, providing the means to interact with the surroundings and creating a safety “cocoon.” Each technology has its pros and cons, as listed in table 1 below, so that full autonomous driving will require the combination of different sources, as shown in figure 2.

Radar is a well-known technology, which relies on sending and receiving electromagnetic waves to measure, detect and locate obstacles in the environment. Radar is specially indicated for automotive applications, as vehicles are good reflectors for the electromagnetic waves, and thus their distance, position, and velocity can be determined accurately.

In automotive environments, Frequency Modulated Continuous Wave (FMCW) radar is used in different frequency bands, depending on the application. The principle of FMCW radar will be explained in the next radar blog entry. The basic topology of the radar is shown in figure 3. It includes one or more radar MMIC transceivers, connected to a high-performance processing unit (MCU or SoC). The topology and number of chips will depend on the location of the radar module on the vehicle and the application it has to cover, as also shown in figure 4. 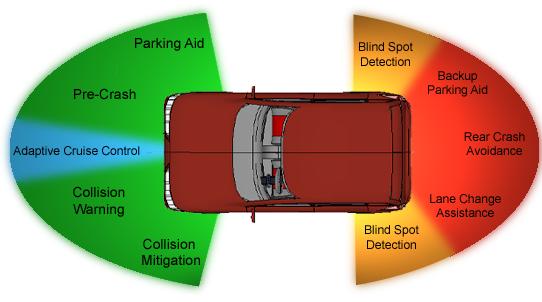 The International Telecommunications Union (ITU) defines two categories of automotive radar systems, depending on their function:

The types of radar can also be classified depending on the measurement range (figure 5):

Fig. 5: Typical range and Field of View for automotive radar.

To provide 360° coverage, different radar sensors with different functions need to be placed on the car, as in figure 6. The obtained data must be combined to obtain real time accurate information on the surroundings.

Radar sensors can easily be installed behind common elements of the car, like bumpers or company emblems, so that they are invisible and do not affect the aesthetics. This integration gets easier with higher frequencies of operation, as the size of the antennas, which determines the size of the module, is linearly proportional to the wavelength, and thus inversely proportional to the operating frequency. There used to be four main frequency bands used in automotive radar systems, two in the K-band (around 24GHz) and two in the E-band (between 76 and 81GHz), as depicted in figure 7.

However, the 24GHz bands are to be discontinued due to interference with radio astronomy and earth exploration applications. As an alternative, the frequency band from 76 GHz to 81 GHz has been accepted by most countries as the frequency band for automotive radars. There, 1GHz bandwidth is reserved for LRR (76 to 77GHz), while 4 GHz bandwidth are available for applications requiring better resolution, as summarized in table 2.

The integration of new safety and comfort features in new vehicles has led to a surge in the radar market. Automotive is the fastest growing segment for this market, expected to surpass US$10 billion in 2025, as shown in figure 8.

If we only consider the radar MMIC transceiver, the market forecast is more than US$1.2 billion, with GaAs technology almost disappearing and CMOS experiencing a rapid growth to become the dominant technology by 2025.

Radar modules have become a standard feature in modern vehicles. While they have some disadvantages with respect to other technologies in terms of range resolution, their reliability and versatility make them irreplaceable parts in modern ADAS/AD systems. The shift to higher frequencies from 76 to 81 GHz has brough new technological challenges but make this an exciting field for new developments by the semiconductor sector.

Tags:  which cars have self-driving features for 2022