Nvidia has unveiled its latest technology for designing and powering various 3D simulations within industries ranging from manufacturing and smart cities to medical research and weather forecasting.

This week, Nvidia introduced at its GTC event a cloud-based version of its Omniverse platform for 3D design and simulation, and a computing system for running the technology in house.

The Omniverse Cloud is an Nvidia-hosted suite of services for artists, designers and developers. The suite includes a collaboration tool called Nucleus Cloud for sharing and editing 3D scenes.

The cloud platform lets collaborators work on projects without transferring massive data sets. A service called Omniverse Create allows designers and other creators to build 3D worlds together in real time. There is a view mode for nontechnical people to see Omniverse-created scenes.

The Nvidia OVX server is for building and running 3D digital twins, which are simulations of the physical world, such as weather patterns, a manufacturing operation, an automated warehouse or a road system in a smart city.

OVX is a single box that includes eight Nvidia A40 GPUs and three Nvidia ConnectX-6 Dx 200 Gbps network interface cards. The computer comes with 1 TB of memory and 16 TB of NVMe storage.

For large-scale simulations, organizations can use the Nvidia Spectrum-3, 200 Gbps switch fabric to connect four OVX systems into what Nvidia calls a SuperPod. It is also possible to combine multiple SuperPods. 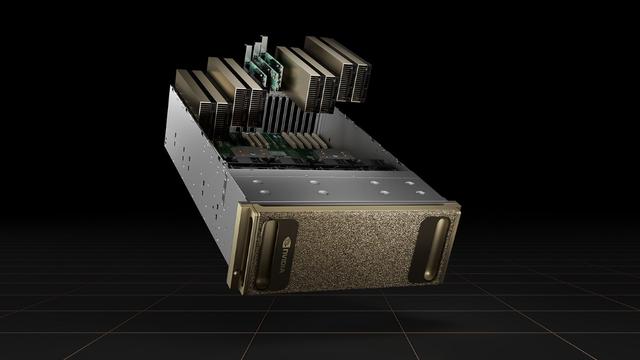 Nvidia has increased the number of connectors to developers' software applications from eight to 82. Supported products include rendering software from V-Ray and Autodesk, Adobe's Substance 3D Painter, and Epic's Unreal Engine 5 for game developers.

The Digital Rail for Germany (Digitale Schiene Deutschland) is using Omniverse to build a digital twin of the country's national railway network, according to Nvidia. The purpose is to use the simulations to develop more precise systems for detecting and reacting to incidents.

Computer manufacturers that will sell OVX systems this year include Inspur, Lenovo and Supermicro, according to Nvidia.

Nvidia has targeted the auto industry with specialty computing products. More than two dozen vehicle makers plan to use the company's Drive Orin system-on-a-chip to power software within vehicles this year, according to Nvidia.

Manufacturers use the security operations center with the Nvidia Drive Hyperion architecture for processing sensor data collected from vehicle activity outside a driver's car or truck. Vehicles use cameras, radar and lidars to warn of potential problems early.

"Nvidia sees its role as powering the software-defined car, which is clearly where the automotive market is going," said Jack Gold, founder of research firm J. Gold Associates, in a research note.

In 2026, Nvidia plans to ship its next iteration of the Drive Hyperion architecture, CEO Jensen Huang said in his opening keynote. The technology will support self-driving vehicles with a sensor suite that supports 14 cameras, nine radars, three lidars and 20 ultrasonics.

Chinese automaker BYD will use Nvidia Drive and Hyperion 8, the current version of the platform, in cars starting in early 2023, Nvidia said. Mercedes-Benz plans to use Hyperion 8 in vehicles in 2024, and Jaguar Land Rover in 2025.

The chipmaker, whose rivals include Intel, expects its design win pipeline to exceed $11 billion over the next six years.

Antone Gonsalves is the news director for TechTarget's Networking Media Group. He has deep and wide experience in tech journalism. Since the mid-1990s, he has worked for UBM's InformationWeek, TechWeb and Computer Reseller News. He has also written for Ziff Davis' PC Week, IDG's CSOonline and IBTMedia's CruxialCIO, and rounded all of that out by covering startups for Bloomberg News. He started his journalism career at United Press International, working as a reporter and editor in California, Texas, Kansas and Florida.

Tags:  what a self driving car sees