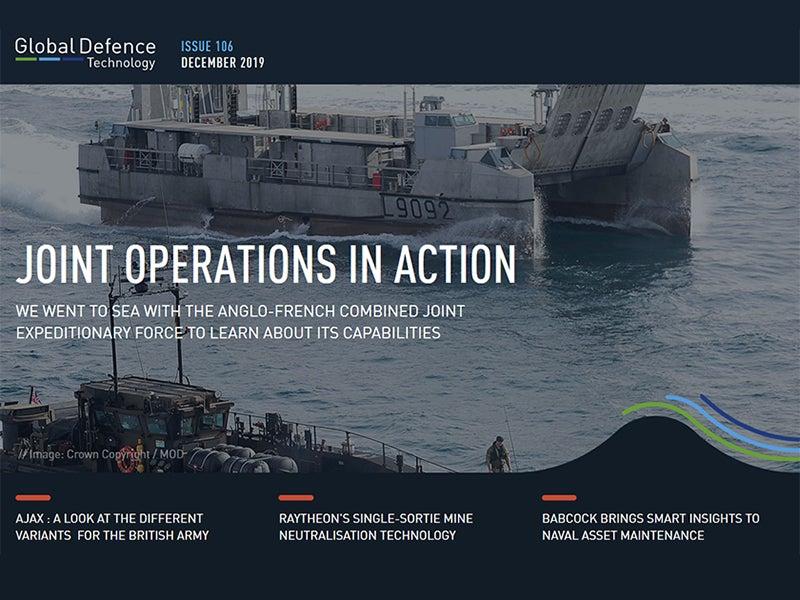 Global Defence Technology is back for another issue packed with industry news and analysis. In this issue, we report from our visit to the Anglo-French Combined Joint Expeditionary Force’s latest exercise in the North Sea, speak to Babcock about its smart naval asset maintenance platform, and more.

In October we visited the British-French Combined Joint Expeditionary Force’s exercise Griffin Strike in the North Sea to find out about the operational readiness of its maritime component and speak to the leaders of both navies. You can read all about it in this issue.

Also in this issue, we take a look at the different variants of the Ajax vehicle and the capabilities it will bring to the British Army, and find out how a partnership between telecoms giant BT and Australia’s DroneShield is developing counter-drone capabilities to protect infrastructure from drone disruption.

We also find out how IFS is working with Lockheed Martin on the F-35 programme, speak to Raytheon about its new single-sortie mine clearance concept, and hear from Babcock how the iSupport360 system brings smart insight to naval asset maintenance.

Data, insights and analysis delivered to you View all newslettersBy the Airforce Technology team Sign up to our newsletters

At sea with the Anglo-French Combined Joint Expeditionary Force

The British-French Combined Joint Expeditionary Force (CJEF) gives the UK and France a quick-reaction force capable of mobilising at a moment’s notice. Harry Lye joined Exercise Griffin Strike in Scotland to see the CJEF in action and speak to the chiefs of both countries’ navies.

The Ajax platform is promising to deliver a slew of capabilities to the British Army and modernise its land vehicle fleet. Harry Lye checks out the different variants of the platform and the unique roles they will play in the army’s future.

How IFS A&D supports some of defence’s biggest programmes

Berenice Baker reports from the IFS 2019 World Conference, where the company showcased how customers are using its enterprise resource planning tools to manage some of the world’s largest defence projects, including the Lockheed Martin F-35.

Raytheon dives deep on mine countermeasures

Raytheon recently demonstrated its single-sortie mine neutralisation concept as part of the US Navy’s Advanced Naval Technology Exercise (ANTX) 2019. Berenice Baker caught up with Raytheon’s director of strategy & business development for undersea warfare Andrew Wilde to find out how the company’s solutions could help allied navies keep sea lanes safe.

The UAE has brought 25 defence companies into the EDGE conglomerate, creating a domestic defence giant. We take a look at the new company, its market share and the strategy behind the UAE’s decision to create a home-grown defence powerhouse.

China has invested heavily in AI for military applications, making rapid progress by leveraging its control of research and industry. We ask whether traditional powers in the West can keep up with the country.

Also in January, we learn how the long-established military technique of deception can be used in the cyber domain to outsmart opponents from Tony Cole, a US Army veteran and cybersecurity expert who has worked on IoT security for the Obama administration.

Plus, we ask whether the future of military robotics lies in autonomous machines or those designed to follow simple orders, check out the latest systems for soldiers from head to toe, and revisit the long history of the B-52 Stratofortress.

Air Traffic Control Towers and Equipment for the Airforce Sector