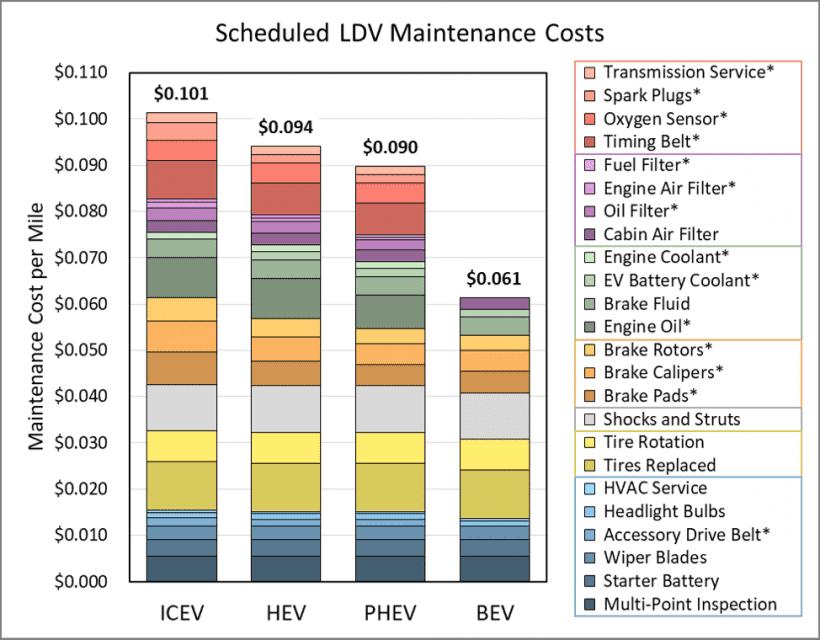 We have heard it over and over again — electric vehicles cost less to own. The reasons are fairly obvious. A vehicle with an internal combustion engine and transmission has about 10,000 parts whirling around in order to make it go. A battery electric car has less than 10. Fewer parts means fewer things that require servicing which in turn means paying less money to technicians to keep our transportation devices running.

While we understand intuitively that electric vehicles should be less expensive to maintain, now there’s proof. The US government operates the largest vehicle fleet in the world, so it stands to reason it should know a thing or two about how much it costs to keep them all running.

In its latest study, the Office of Energy Efficiency and Renewable Energy says,

The government did what the government does best. It drilled down into all the details of vehicle maintenance and came up with the following chart. Notice that hybrids and plug-in hybrids also had lower maintenance costs than conventional cars but only slightly so.

Big deal, you say? Who cares about a difference of a measly 4 cents? Consider this. The light duty vehicles — sedans, SUVs, passenger vans and the like — owned and operated by the federal government traveled nearly 2 billion miles in 2019, according to the General Services Administration. That difference of 4 little cents translates into savings of about $78 million a year, according to Motor Trend.

The one thing that the EERE study doesn’t show is the reduction in fuel costs for those government owned vehicles, which allows us to do a little speculating. Let’s assume the average fuel economy for all of them is 20 miles per gallon. That means it would take about 100 million gallons of gasoline to drive 2 billion miles.Now lets assume that gas costs an average of $3.00 a gallon (I am math challenged so I like to use round numbers). 100 million gallons at 3 bucks a gallon equals $300 million, does it not?

Now let’s assume further that the cost of electricity is roughly half the cost of gasoline. The end result is that a fleet of electric vehicles would save Uncle Sam about $150 million in fuel costs every year. Add in the $78 million in lower maintenance costs and the total annual savings from switching the entire US government fleet to electric vehicles could be $228 million every year from here to eternity or $2.28 billion over the next decade.

You would think that saving hundreds of millions of dollars a year is the kind of thing Republicans — who beat their breasts constantly about what fiscal conservatives they are — would embrace. That they have not done so rather gives the lie to all their claims.

So the next time someone tells you that electric cars are too expensive, ask them if they would like the government to save $228 million in fuel and maintenance costs every year. If their answer is yes, the way to make that happen is to convert the US light duty vehicle fleet (not including the post office, which is a separate entity) to battery electric vehicles.

Now imagine what doing that would do to the cost of those vehicles. Knowing what we do about economies of scale, the conversion would lower the purchase price of electric vehicles in America for everyone. It’s a no-brainer, which means it should appeal strongly to conservatives.

Appreciate CleanTechnica’s originality? Consider becoming a CleanTechnica Member, Supporter, Technician, or Ambassador — or a patron on Patreon.
Advertisement
Have a tip for CleanTechnica, want to advertise, or want to suggest a guest for our CleanTech Talk podcast? Contact us here.
Tags:  how many gallons does a smart car hold