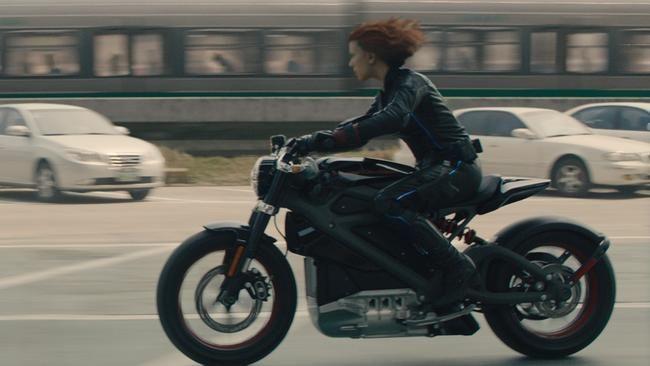 When Scarlett Johanssen, as Black Widow, drops out of the bottom of a jet fighter, astride a motorcycle, in the new “Avengers: Age of Ultron,” the weirdest thing about the scene is the bike she’s riding.

It’s a Harley-Davidson LiveWire, one of the few actual vehicles used in the filming of this CGI-driven sequel.

It’s also a motorcycle that doesn’t really exist -- yet.

The LiveWire -- a prototype of which we rode last year -- is Harley’s bid to enter the nascent but growing electric motorcycle market. It’s a high-performance, virtually silent streak of lightning that, when it’s perfected and on the market, could turn die-hard Harley freaks into electric motorcycle riders.

But, since it’s only a prototype, why is it doing the product placement turn in a Hollywood movie?

“We saw this as an opportunity to build awareness about the technology, and a wonderful catalyst to move our industry forward in a positive way,” said Dino Bernacchi, Harley’s director of U.S. marketing.

Harley goes way back with the “Avengers.” The first comic books featuring “Avengers” team leader Captain America, published in the late 1940s, had the superhero riding a Harley-Davidson.

(And “Captain America” was the nickname given the chopper ridden by Peter Fonda in the motorcycle road movie “Easy Rider.” It, too, was a modified Harley.)

Bernacchi said Harley and the production team behind the 2015 “Avengers” installment began discussing another partnership long before production began.

Writer-director Joss Whedon mentioned a scene in which a motorcycle drops out of the bottom of this super high-tech jet, Bernacchi said. “We knew the motorcycle had to be as incredible as the jet,” he said. “So we showed them what we had coming.”

That was the LiveWire, which was being developed at Harley’s Milwaukee headquarters under tight security and had yet to be shown to the world.

Whedon and his team were impressed.

“They said, ‘Holy crap! What is that? We need four of them,’” Bernacchi said.

Harley shipped four of the gleaming LiveWires to the South Korean “Avengers” set, where scenes featuring Johanssen -- in reality, French stunt woman Sarah Vignot -- made the most of the electric prototype.

The LiveWire isn’t the only Harley product that’s on display in the new movie. Captain America will again be astride a special Street 750.

But it’s the LiveWire that got the workout. Harley has taken the electric motorycle on a global road tour, and has invited thousands of potential customers to take a test ride. But, not like this.

“We don’t usually allow people to jump 40 feet in the air, and do wheelies,” Bernacchi said. “The stunt riders learned what it can do, at the peak of its performance. No individual has ridden this like the stunt woman ride it. It’s really been put through the paces.”

Like many electric motorcycles, the LiveWire’s Achilles’ heel is its range. The prototype being shown to test riders can go only about 50 miles between charges.

The real question Harley will face, as it gets closer to bringing the battery-powered bike to market, is if it can have the kind of legs on the highway that the “Avengers” movies have had at the box office.