Garmin has added a second rotorcraft—the Bell 505, which is equipped with a Garmin G1000 avionics suite to the list of FAA approvals for its GFC 600H helicopter flight control system (HFCS. The first certification program for the GFC 600H was the Airbus Helicopters AS350 AStar, with certification obtained in February 2020. In the Bell 505, Garmin added some new features to the GFC 600H installation to continue improving safety and utility, including a higher-torque servo for the pedals (for the optional third axis), because in the 505 these are not hydraulically boosted. Bell is offering the GFC 600H as the preferred autopilot for new 505s and its service center network will install them as retrofits for the aftermarket, as will Garmin dealers.

Most 505s are flown by owner-pilots or pilots hired by the owners, according to Garmin OEM sales manager Chris Bauer, with about 40 percent operated in professional, commercial-type operations. Many owner-pilots are new to flying helicopters but are familiar with Garmin avionics in fixed-wing aircraft. “The Garmin solution has safety-enhancing features and benefits that can help protect a fixed-wing pilot moving to rotorcraft,” he said. “There is also commonality and a ton of familiarity in terms of how the autopilot works, the modes, and how to fly it. The commonality is so they don’t have to learn how to manage the flight control system every time they switch aircraft.”

In the 505, what pilots will see with the GFC 600H is the NVIS-compatible GMC 605H mode controller at the top of the console. The 605H also contains its own attitude and heading reference system (AHRS), and both the 605H’s and the G1000’s AHRS must be working for the autopilot to be airworthy. There is a separate flight control system (FCS) on-off switch lower on the console—easy to reach in case of the need for an emergency shutoff.

New collective and cyclic heads, which Bell and Garmin developed jointly, have new features. The cyclic has a disconnect switch, LVL (level) mode button, a hat switch for trim, and a force trim release (FTR) button. The collective is fitted with a yaw on/off and yaw trim switch (if the optional yaw servo/third axis is installed). The yaw trim is new in the 505 and not available on the AStar, allowing the pilot to set a ball-out-of-center yaw position. Setting yaw out of trim can be helpful when an observer needs to look at something on the ground. Some pilots also like to fly with just the yaw axis engaged, according to Bauer, and that’s possible in the 505.

Two or three GFS 83 “smart” servos are installed in the 505, with the pitch and roll servos mounted under the floor and in parallel with the flight controls, so the cyclic and collective move when the autopilot is operating. Each servo contains two processor boards in a fail-passive design, each of which computes the movement needed by the servo motor, as requested by sensors and the pilot, explained Bauer. But if the GFC 600H computer commands and the servo processors don’t agree, then the autopilot won’t input an erroneous movement. Garmin also added envelope protection features such as limit cueing (Helicopter Electronic Stability & Protection or ESP) and the LVL mode.

Improvements added to the 505 installation, following the AStar certification, include a reversionary heading/track mode, which will maintain heading using GPS track even if the heading source fails; improved handling during slow-speed flight, both tightening up the yaw axis when transitioning to forward flight and during a groundspeed-hold hover; sensor data to improve station-keeping during hover and when doing pedal turns; displays of the references used by the autopilot in groundspeed and hover-hold mode so the pilot can see what the helicopter will do when letting go of the controls; enhanced aural alerts to help the pilot recognize the autopilot mode; and a new “ding-dong” alert that tells the pilot when a transition has been achieved—for example, when in IAS mode and capturing an altitude, or when an abnormal mode change occurs. This is so the pilot knows the transition happened while looking outside, but also to look at the mode controller to verify what has changed. Finally, the 505 GFC 600H adds a new function for the failure of some inputs. If attitude inputs fail, for example, and the servo still has power, it will hold the cyclic in the same position it was in when the failure occurred and indicate the failure to the pilot. This is an improvement over an autopilot that simply shuts off with a loss of sensor input and prevents such a problem giving the pilot a helicopter that is diverging from control. It’s “fail safer,” Bauer explained. 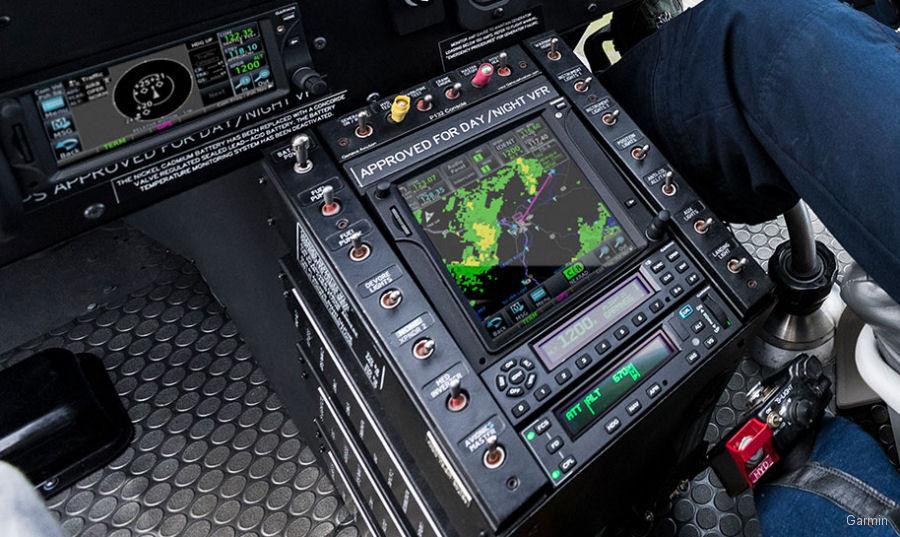 Garmin test pilot Sean Doyle demonstrated the Bell 505 GFC 600H installation with a flight from Garmin’s facility at McNary Field in Salem, Oregon. Although I don’t have a helicopter pilot certificate, I do have a handful of hours of dual instruction. But he let me fly from the 505’s pilot (right seat) and barely touched the controls during the flight. This isn’t just a testament to how easy the GFC 600H makes flying a helicopter, but also the design of the 505. Even flying the 505 in “wet noodle” mode (without any FCS input), I was able to keep the machine well under control.

I lifted off the Garmin pad and hovered briefly before transitioning into a climb then turning toward the southeast. Once above 1,000 feet, I leveled off, then engaged the autopilot and tried out various modes. First I engaged the FCS, which can be done either with a button on the mode controller or by pushing the FTR switch on the cyclic. This engages the FCS in pitch, roll, and yaw, and this could also be done by pushing the LVL button.

We ran through some of the “upper modes” such as altitude hold (ALT), vertical speed (VS), indicated airspeed (IAS), heading (HDG), and NAV, then spent some time demonstrating safety functions. The LVL mode really works, just as it does in fixed-wing applications, bringing the 505 back to straight-and-level from fairly radical bank and pitch attitudes. I also pushed the controls through the limit-cueing thresholds to test the ESP functions, and it’s clear that this is a helpful tool for pilots who spend most of their time looking outside.

The most fun part of the flight was using the FCS while flying through a canyon along the Santiam River. Doyle explained that the FCS helps the pilot in situations like this keep focused outside, looking for obstacles, ensuring a safe operation without having to focus too much attention on controlling the ship.

I flew down into the canyon, pulling up into a hover above a small island where the river made a 90-degree turn. While it felt extremely challenging to be maneuvering a helicopter in such a tight space, the FCS helped me feel confident that I could put the 505 exactly where I wanted it. Finished with the hover, we climbed out of the canyon and headed back towards Salem.

Doyle had me set up the RNAV approach to Runway 31 at McNary Field, and I used the FCS to fly the coupled approach, which it did perfectly smoothly. Over the runway, I brought the 505 to a hover. Then we flew back over to the taxiway near the Garmin facility to practice some more precision maneuvering, flying in a yaw out of trim condition and trying the various hover modes. I compared flying along the taxiway with and without the FCS engaged, and it was much easier with it switched on.

The 505’s easy handling was underscored when I landed on the Garmin helicopter pad without any assistance from the autopilot.

Having flown two helicopters with the GFC 600H HFCS, I believe it’s a product that helps make flying safer. As Bauer pointed out, “it’s more than just an autopilot,”