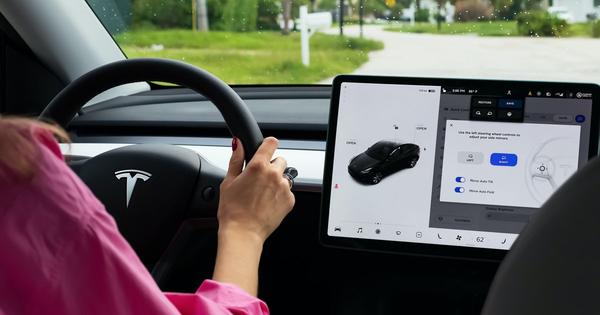 I’m not readyfor self-driving cars. The idea of watching the wheel turn while my hands sit in my lap scares me way too much. But if we, as a society, need more ideas for helpful artificial intelligence applications, might I suggest inventing the computer closet from the 1995 movie Clueless? Personally, I would love it if Siri yelled at me for trying to pair animal print with tartan.

Meanwhile, Jordan Golson thoroughly enjoyed his drive in the “hands-free” 2022 Lincoln Navigator in his latest Inverse car review. You can read the review below in addition to stories about cats, household cleaner, and coke. Let us jumpstart your day.

This is an adapted version of the Inverse Daily newsletter for Tuesday, March 8, 2022. Subscribe for free and earn rewards for reading every day in your inbox. ✉️

The Navigator is also equipped with ActiveGlide, which allows for “hands-off driving on 130,000 miles of ‘Blue Zones’ — generally limited access, multi-lane thoroughfares like interstate highways — so long as the driver is always paying attention,” writes Golson. Not truly a case of self-driving, the feature is more like “another level of the adaptive cruise control system,” writes Golson. It also tracks your head and eye movements and performs a series of alerts if you aren’t focusing on the road, eventually slowing to a stop if all of its alerts are ignored.

Thankfully for Golson, it all works. “You wouldn’t think steering was that difficult, but spending a rush hour behind the wheel while ActiveGliding feels like far less of a chore than usual,” writes Golson.

Look, no hands: Why the NHTSA is investigating Tesla’s Autopilot

Should you take your cat on walks?

If you don’t have a hands-free go-kart to zoom around in, you might be wondering if your cat would enjoy accompanying you on your next walk. Experts tell Inverse that it depends, really, on if your cat wants to.

“In general, experts recommend taking your cat for a walk, so long as your pet is okay with the activity and you can safely take them outdoors without causing stress or discomfort,” writes nature reporter Tara Yarlagadda. “All the experts Inverse spoke with emphasize you shouldn’t force your cat to do anything that makes them uncomfortable. If you try getting them to take a walk and they’re clearly expressing discomfort, don’t push them further.”

If your cat is agreeable, a walk could provide it with valuable mental and physical benefits. Honor your little walk-star by buying a cat leash and harness and taking it for a comfortable walk in a safe environment, like your backyard. But if your cat is more the Garfield type, you should see if your cat finds fun objects like cat trees, interactive toys, and exercise inspiring. Ultimately, when it comes to cat health, “it’s less about exercise and more the need to provide cats with stimulating, enriching activities that engage their minds as well as their bodies by nurturing the cat’s hunting instincts,” writes Yarlagadda.

Work hard, sleep long: Why do cats sleep so much?

“The notion that Coca-Cola contains cocaine is a popular middle school rumor,” writes Inverse science reporter Elana Spivack. “Even its nickname Coke hints at this secret ingredient.” You might brush it off as another case of kids being kids, but your local 12-year-old isn’t entirely wrong about Coke’s origins.

When Coca-Cola was first introduced in 1886, it was “sold as medicine,” writes Spivack. Though the soda never featured cocaine as an ingredient, it got “the first part of its name from the coca leaf, from which cocaine is also derived,” writes Spivack. It contained coca leaf extract, or ecgonine, which experts say has a “mild, subdued, pleasant effect” like strong coffee, and the caffeine-containing kola nut.

Though the soda company stopped using coca as an ingredient in 1929, the substance has always been an important natural medicine in some of South America, even helping tourists today with altitude sickness or nausea. “Despite the fact that the sugar drink is considered a quintessential all-American beverage, its two main components are distinctly not American,” writes Spivack.

Mopping with this household cleaner is like breathing car exhaust

Whoa, whoa, whoa — put down the mop! A study published last month in Science Advances suggests that “mopping with monoterpene-based cleaning products — which are ubiquitous in the U.S. — created as many airborne particles in a closed-off room as one would take in standing in an urban downtown during rush hour,” writes Nick Keppler.

That sounds just as icky as anything spilled on my kitchen floor. “In most environments, particle pollution happens in two stages,” writes Keppler. “First there is the initial release of particles, through a combustion or the release of chemicals. Then there is the oxidation of the volatile organic compounds, or VOCs, released.” VOCs can irritate your airways, damage your liver, and make you feel sick, even though a certain class of them called monoterpenes are usually marketed as citrus-scented essential oils.

Researchers also discovered that, after mopping a ventilated room with monoterpene-based household cleaner, “someone in the room would breathe in particles, at a rate of 560 million to more than a billion per minute,” which is comparable to “being on a highway shoulder, getting bathed in car exhaust,” writes Keppler. So as much as you may want to enjoy your hardwood floors smelling like a pine forest, make sure to wear a mask, use a filtration system if possible, and try not to be influenced by our “pandemic-driven hygiene theater era,” writes Keppler.

Hold your breath: The complex link between air pollution and depression

About this newsletter: Do you think it can be improved? Have a story idea? Want to share a story about the time you met an astronaut? Send those thoughts and more to newsletter@inverse.com.

Song of the day: “Nuclear Seasons,” by Charli XCX.

Tags:  can you be drunk in a self driving car