China is cracking down on data privacy. That’s terrible news for some of its biggest tech companies 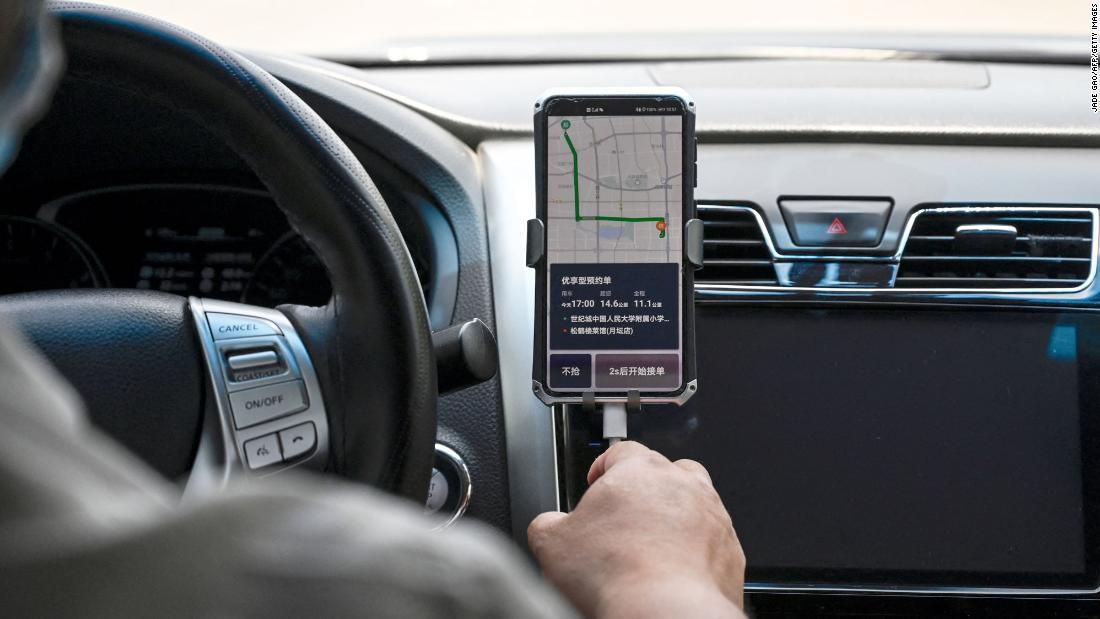 China spent months clipping the wings of some of its tech champions over concerns that they were crowding out the competition. Now Beijing is seizing on data privacy as the next step in a sweeping campaign that threatens to cut companies off from global investment.

The country’s extraordinary clampdown on Didi has focused on allegations that the ride-hailing company has mishandled sensitive data about its users in China.

Already, the company that elbowed Uber out of China has been kicked off app stores in the country and warned that it violated laws about data collection. The regulatory pressure has upended its first days as a publicly traded company in New York, with shares plummeting nearly 20% on Tuesday and retreating even more on Wednesday. All told, Didi has shed some $29 billion in market value from its peak.

The company has said that it would “strive to rectify any problems” and “protect users’ privacy and data security and prevent cybersecurity risks.” But the firestorm still poses some serious questions about Didi’s business, and it has acknowledged that revenue in China may take a hit.

Didi isn’t the only Chinese company now entering Beijing’s line of fire. Two other businesses that recently listed in New York — truck-hailing company Full Truck Alliance and job listing firm Kanzhun — have been singled out by Chinese regulators as targets of a probe “to prevent national data security risks.” Their stocks have fallen 11% and 12%, respectively, this week.

Didi's IPO was a disaster. Here's why Chinese companies keep listing in the US

The focus on Didi and other US-listed Chinese firms indicates that China’s tech crackdown has entered a “new stage,” according to Alex Capri, a Singapore-based research fellow at the Hinrich Foundation.

This phase of China’s tech crackdown is further defined by the ties these companies have to the United States. While Beijing’s anti-monopoly probes were concentrated on operations largely within China’s borders, it’s hard to ignore how much the government’s latest actions have focused on firms that sought foreign investment.

“China’s concerns over personal data are exacerbated when the data is at risk of being controlled by US interests,” said Brock Silvers, managing director at Hong Kong-based Kaiyuan Capital, who added that it was “no coincidence” that the three companies were investigated immediately after raising capital in the United States.

Full Truck Alliance and Kanzhun have both said they would cooperate with regulators and thoroughly review its cybersecurity practices.

Chinese regulators began reining in tech firms late last year, when they shelved an IPO for Jack Ma’sAnt Group at the last minute over “major issues” with its listing. Since then, Beijing has investigated several companies, including Alibaba and Tencent, for alleged monopolistic behavior or breaches of customer rights. Alibaba, which Ma co-founded, was fined a record $2.8 billion in April, for example, whileAnt Group was ordered to overhaul its operations.

The Didi probe suggests that regulators are now giving themselves an even broader mandate when it comes to curtailing Big Tech’s power.

On Sunday, the Cyberspace Administration — China’s top internet watchdog — accused Didi of “serious violations of laws and regulations” in its collection and use of personal information and banned Didi from app stores.

Leaders of the ruling Chinese Communist Party then escalated the data security campaign on Tuesday by pledging “zero tolerance” for illegal securities activity at home, and saying that they would more heavily regulate the ability of Chinese firms to list overseas.

The government said it would strictly regulate what kind of information those tech companies send and receive across the nation’s borders, and draft new rules about how to protect sensitive data related to overseas listings.

Concerns over data security in China — especially when the United States is involved — aren’t new, though they have been gaining traction in recent months.

Earlier this year, a popular annual consumer rights show in China sparked a national debate about privacy and surveillance and sent companies scrambling to stay on Beijing’s good side.

And Tesla (TSLA), the electric carmaker run by Elon Musk, has been rattled this year by data security allegations, which at one point pushed Musk to say publicly that his company’s cars would never be used for spying in China. Tesla (TSLA) later announced that it had set up a new facility in China to store local user data.

Chinese state media has also been stressing the need to focus on data security. The Global Times, a hawkish state-run tabloid, published commentary on Sunday urging Beijing to not allow internet companies “to become rule makers for the collection and use of personal information.” 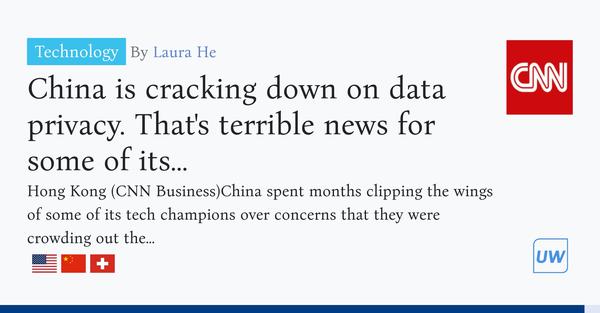 “The standards must be in the hands of the state to ensure that the internet giants exercise caution in collecting personal information,” the commentary read, adding that China “must never let any internet giant become a super database of Chinese people’s personal information that contains even more details than the state, let alone giving them the right to use those data at will.”

Data protection is also stirring debate on social media in China, where many users are calling for tougher regulations on companies like Didi to safeguard their private data.

One widely circulated criticism of Didi stems from a 2015 research article, in which the company joined state-run Xinhua News Agency to detail travel behaviors about people coming in and out of 17 major government agencies. The data examined how many cars were entering or exiting different complexes, and used that information to draw conclusions about what kind of government actions could have sparked such activity.

Another user questioned the data collection practices of other Chinese companies, including food delivery giant Meituan and delivery and logistics firm SF Express.

“As long as you are using apps, there is almost no privacy,” the person said.

Tensions between Washington and Beijing have also heavily colored the latest round of China’s tech crackdown.

The two countries are still fighting over everything from tech and trade to allegations of human rights abuses in Xinjiang and Beijing’s control over Hong Kong. The United States late last year ratcheted up pressure on Chinese firms that trade in New York, and now requires them to regularly open their books to US accounting authorities or else risk being forced off stock exchanges.

“President [Xi Jinping’s] administration has been sending signals for some time that it would be driving toward becoming more self-reliant and less under the control of major trading partners like the United States,” said Doug Guthrie, a professor and director of China Initiatives at the Arizona State University.

Capri, of the Hinrich Foundation, expected Beijing to “try and limit [Didi’s] interactions with foreign players,” because of the company’s large share of US and Japanese investors.

“Since the blowup with Alibaba over the last year, it is clear that the Chinese government wants to send a very clear message to all tech companies operating in China,” Guthrie said. “If you want to operate safely and securely in China today, you must be an ally of the Chinese government.”

Any company that appears to be going “too global too quickly,” he added, “is going to be pulled back into line.”

President Joe Biden speaks to reporters before boarding Air Force One at Geneva Airport in Geneva, Switzerland, Wednesday, June 16, 2021. Biden is returning to Washington as he wraps up his trip to Europe. (AP Photo/Patrick Semansky)

Investors already seem to be wary of companies that are still trying to straddle the line between the United States and China. Chinese companies that are listed in both New York and Hong Kong underperformed the broader market in the Asian financial hub on Wednesday. Video-sharing website Bilibili tumbled more than 5%. Its US-listed stock plunged a combined 13% on Tuesday and Wednesday.

“It will become increasingly difficult for Chinese platforms to operate in the world’s liberal democratic markets on the one hand, while also trying to negotiate China’s tightening domestic controls, on the other hand,” Capri said.

Beijing’s tactics have already raised questions about whether too much regulation could hamper innovation. A couple of China’s most successful entrepreneurs have quit high-level positions in recent months. While they’ve cited reasons unrelated to the crackdown for stepping out of the limelight, experts have described the atmosphere in China for tech firms as “increasingly toxic.”

Jack Ma is stepping down as head of his elite business school, report says

Silvers, from Kaiyuan Capital, said that global investors may also find it increasingly risky to even own Chinese tech stocks — a fear that could jeopardize the ability of Chinese firms to access overseas capital.

Didi and the other companies now under investigation “were allowed to list and raise offshore capital only to have regulators open investigations almost immediately afterwards. This is extremely troubling, deeply unfair to investors, and raises serious questions regarding market integrity,” Silvers said.

He said that Beijing could reassure investors by banning companies under investigation from accessing public markets. That way, regulatory surprises would be limited.

“But until that occurs,” he added, “many may dramatically reduce or eliminate allocations for China IPOs.”