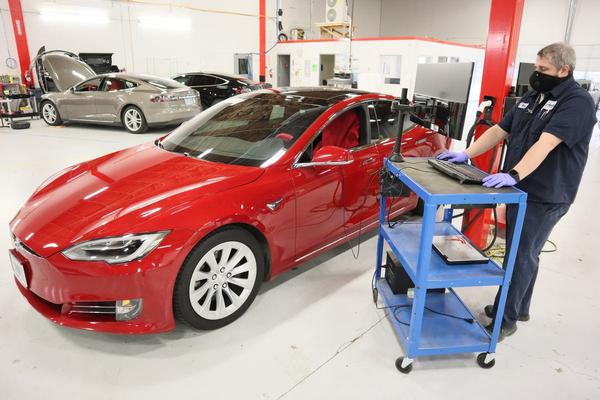 Auto body repairs to late-model electric vehicles after minor collisions cost about 3% more than for gasoline cars, even though less time is required for the work.

Customers are also less likely to be satisfied with electric vehicle repairs, while replacement parts are more expensive and will more likely have to be purchased from the original equipment manufacturer. On the other hand, electric cars are more likely to be able to drive away after a collision.

Those were among the findings in CCC Intelligent Solutions’ first-ever side-by-side analysis of repair costs for electric vehicles compared to repair costs for the gasoline-powered version of the same model. CCC industry analyst Susanna Gotsch examined one year of data from direct repair program appraisals for repairs to non-luxury small cars, each one to three years old, submitted for crashes that the vehicle was able to drive away from.

Gostch said her sample size for the comparison was limited because Tesla manufactured 80% of the cars that produced an appraisal report and does not make gasoline vehicles. She compared reports for electric vehicles that had a gasoline-powered counterpart, such as the Chevrolet Bolt v. Sonic and Nissan Leaf v. Sentra.

Only “driveable repairs” were used because non-drivable accidents made up only 25 to 30% of all appraisal reports, leaving too small a sample size, she said.

“In many ways EV’s are the poster child for growing vehicle complexity, with vehicle repairs requiring more time spent by technicians performing scans and calibrations and researching repair methods,” the report says.

Gotsch said in a telephone interview that one purpose of the report is to inform collision repair shops about what to expect as auto manufacturers transition to electric propulsion systems. Shop owners will have to make significant capital investments as technology evolves and will have to train or hire workers with a different set of skills, she said.

“As a body shop owner, you are saying ‘when am I going to see these kinds of cars in my shop and when should I make those investments?'” she said.

The share of electric vehicles is projected to grow. President Joe Biden signed an executive order calling for 50% of new vehicles to be zero-emission by 2030. Most US auto manufacturers have increased investment in the technology.

For now, the CCC report said that only 0.54% of the repair appraisals in its database involve electric vehicles, but that share will increase as the vehicles gain in popularity. Of the reports received so far, 40% are from California, where electric vehicles accounted for 1.5% of repairable volume. Hawaii, Washington, Oregon and New Jersey also had more electric vehicle repairs than the rest of the nation.

Terry Mostul, owner of Artistic Auto Body in Oregon, noticed the trend long before most his peers. After 35 years in the auto body business, he started repairing electric vehicles at his shops in Tigard and Wilsonville in 2017 after noticing the large number of Teslas driving around the Portland suburbs.

He said he has no regrets. “It’s definitely where the industry is headed,” he said.

Mostul said he was not surprised to learn that CCC found electric cars cost on average 3% more to repair. “I wouldn’t have been surprised if it had been more than 3%,”he said.

Mostul said electric vehicles require more “one-time use parts.” For example, certain bolts have to be replaced according to the manufacturer’s specification and cannot be reused. Electric cars are also more likely to be equipped with advanced driver assistance systems, which requires more calibrations and more sophisticated technology.

Mostul says in a sense, electric cars are simpler than gasoline-powered cars because they have fewer systems to work with. However, those systems are more complex and require specific knowledge.

“They can be intimidating,” he said.

But he says auto body shops have no choice but to learn how to repair electric vehicles.

“They are going to start rolling into everybody’s shop,” he said.