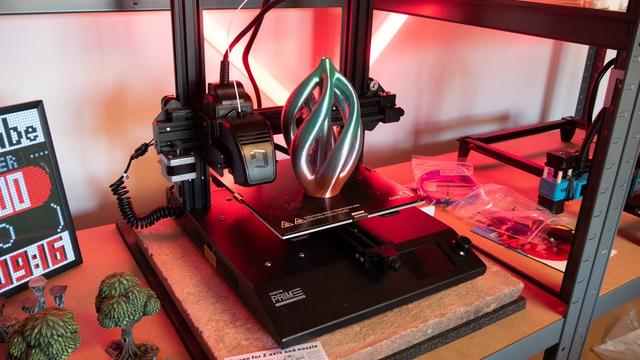 The best thing about the Cubicon Prime is that you can hit print, and walk away. The direct-drive extruder combined with a comprehensive 16-point leveling system and evenly heated bed results in great prints, every time. As with any printer, your results will vary depending on your print setting, filament, and ambient conditions—but if something goes wrong, at least you'll know the issue is at your end, rather than with the printer.

The Cubicon Prime is a mid-range Ender 3 style FDM (fused deposition modeling) printer, with a direct drive extruder and inductive bed-leveling probe—just two of the features that make it an excellent choice for beginners to 3D printing.

At $400, it's not the cheapest option out there, but it's worth spending a little more to get the quality build and reliability. I just love it when a printer is good enough that you can hit print, and walk away knowing it'll work. Let's take a closer look at the Cubicon Prime—from established 3D printing experts Cubicon of Korea—and see if it's the right choice for you.

The printer arrives part assembled, but it's not quite as simple as just bolting the gantry on, nor is it complex enough that I'd go so far as to call it a "kit". You'll need to attach the print head and plug everything in, and the gantry itself was quite tricky to secure. The instructions say to bolt from the sides first, but I found the process was much easier if I bolted from underneath first, in order to pull the gantry down and align the holes correctly.

It took me about an hour to put everything together, but at the end of the process, it's clear we have a very solid construction with great component quality and good tolerances. The only slight disappointment was the cable management, though there are some clips on the SD card you can print yourself to improve this. It hasn't proved to be an issue for me yet, however.

The total print volume possible on the Cubicon Prime is a standard 22cm square by 25cm tall. This is entirely average, but more than enough for most people. The heated print bed is a textured glass, which in my testing provided excellent adhesion (sometimes too much).

The Cubicon Prime also features dual Z-axis motors, along with a simple filament run-out sensor. None of these features are remarkable, I should note.

Where things start to differentiate is in the print head. It's an all-in-one custom design with a direct-drive extruder. The front flips down, so you can easily access the extruder gears to clean them if needed. Swapping out the nozzle is a simple case of heating up it up, and using a spanner. The replacement goes in just as easily. You don't need to unscrew a heatblock or mess around with tiny, fiddly screws—just the small spanner supplied is all that's needed.

Why is a direct-drive extruder important? While some maintain that a direct drive is often an ineffective upgrade, when it's built into the printer by design, it's a fantastic choice for beginners. With no Bowden tube, you'll get less jams, and if breakage occurs from old filament, it's a lot easier to deal with. Print quality can also be better as there's less flexibility in which compression can occur (especially when printing in flexible filaments), which makes retraction more difficult. In my experience, a direct drive extruder is just easier to deal with than a Bowden tube, and presents less issues, which this jaded old tech reviewer certainly appreciates.

The interface on the color LCD touchscreen is again, nothing revolutionary—but it is very easy to use, reliable, and offers all the features you could want. Most notably, you have live adjustment of all axes (not just Z), which you’ll find under the baby steps menu. In the event of a power cut or error, I found turning the printer back on would automatically resume the last print.

One other neat feature is a 3D preview of the GCode files, though this requires using the Cubicon supplied version of Cura (more on that later).

I can offer nothing but praise for the Cubion Prime's interface, with one exception. The printer has Wi-Fi built-in, so in theory, you don't even need to use the microSD card—you can just hit print directly from within Cura. In practice, I found the transfer speed was so slow as to be essentially useless. My small test file for a 7-hour print took around an hour and a half to transfer. It worked, eventually, but that trade-off in time vs convenience just isn't worth it. The remote control functionality works, but given the slow transfer speed, I can't see myself ever using Wi-Fi.

The printer ships with a USB drive containing a customized, branded version of Cura. It's a few versions behind the official Cura release, but has the printer profile built-in, along with Wi-Fi support and a plugin to generate preview images, so you aren't left scrolling through hundreds of GCode files trying to figure out what bizarre name you gave your latest creation. Just choose "Save as TFT" instead of "Save to Disk", and the preview image will be added. 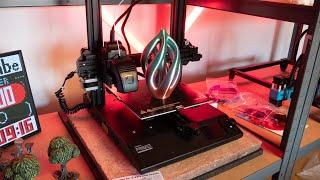 If you're familiar with Cura, you'll need no explanation at all. If you're not, know that there are three popular software packages to choose from that can convert a 3D model into machine instructions your printer will understand. These are Cura, Slicr, and Simplify3D (the latter being a premium option).

Unfortunately, I found that the version of Cura supplied for Mac OS had some annoying and well-documented bugs, such as not being able to duplicate models or arrange them on the tray. It's fixed in the official latest release of Cura, but the Cubicon Prime profile isn't yet included.

I contacted support and they were able to supply me with the profile and resources to add to a regular latest version of Cura to fix that, but it's not included out of the box so you will need to either use the version they provide or get in touch with support if you need the latest version. By doing this, I also lost the ability to generate thumbnails of the object (and Wi-Fi, but no great loss there)—so if you are able to stick with their supplied version of Cura then you probably should.

Prior to every print, the machine will spend about five minutes doing a 16-point self-leveling process. This uses an inductive sensor, rather than the more common (and cheaper) physical probe. In the past, I've had nothing but problems with probe leveling, to the point that if it's an optional extra, I just won't install it.

While admittedly a slow process, the inductive probe, and 16-point leveling do seem to give good, reliable results. You might still want to use the baby-step adjustments for your first layer, but you won't need to do this all the time—perhaps just when you change filaments or move the printer.

My very first prints off the bat with some 6-month-old white PLA came out superbly. It took about 7 hours to print these small Gloomhaven pieces in 0.06 quality, though I forgot to disable the raft which really wasn’t needed. That said, painting them up and dry brushing revealed a fair bit of Z-wobble. This seems to be unique to the 0.06 setting—I didn't experience it again when printing at other qualities, so it might just have been teething problems.

I downgraded the quality to "normal" 0.15mm layer height to do these trees. Again, I painted them up a little to highlight any misgivings in the textures. This revealed much better quality, and I'm really impressed with how reliably they printed.

Next I wanted to try some TPU flexible filament, and I should note this is my first time working with this type of rubbery filament. It turns out it's both easier to print with in some ways, and worse in others. This oversized rubber washer that my neighbor requested was simple at 100% infill, and remains watertight.

I did some basic plant-ties and no-tie shoelaces, which are remarkably strong.

The soap dish came out nicely, though the stringing on the internal structure is seemingly unavoidable.

After a few more TPU test prints, I also found out it was very sensitive to incorrect first layer heights, and would easily clog a nozzle if too close. This resulted in some serious amounts of TPU spaghetti inside the print head.

On the plus side, this gave me an excuse to test the nozzle swapping procedure, which was easy, with a spare supplied in the package. However, I don't think I'll be printing in TPU again.

After swapping the nozzle, I tried this vase with some silk rainbow PLA. From the front it looks great, albeit with a fair bit of spidery stringing, though the layer joins around the back are obvious. While Cura supports "vase-mode", in which the print head moves smoothly in a single long line to print an entire model, the walls have to be so thin and the resulting objects are useless for anything other than demonstrating what vase-mode is.

Swapping back to white PLA, this compact technical test shows fantastic bridging of up to an inch long, and overhangs of up to 80-degrees. This was also printed without any brim or raft for adhesion, and resulted in no warping, demonstrating an evenly heated bed.

As a final test, I fully loaded the print bed with smaller bits. Then I pressed print, and walked away. And this really demonstrates what I love about this printer: it just works.

Cubicon Prime is Fantastic for Beginners

In truth, you could buy a basic 3D printer for half the price of the Cubicon Prime, but it would be missing some key features, would require weeks of customization, tweaking, and upgrades—and might even be a fire hazard. Factor in your time and upgrade costs, and you'd end up spending far more to get the same build quality and reliability. If that's your idea of fun, go right ahead!

The best thing about the Cubicon Prime is that you can hit print, and walk away. The direct-drive extruder combined with a comprehensive 16-point leveling system and evenly heated bed results in great prints, every time. As with any printer, your results will vary depending on your print setting, filament, and ambient conditions—but if something goes wrong, at least you'll know the issue is at your end, rather than with the printer.

If you want a 3D printer in order to actually print things, and not purely because you like tinkering with broken machines, the Cubicon Prime is a fantastic choice. For beginners, the ability to isolate the issue to something you did wrong is a helpful learning experience. You'll make mistakes still, but at least they'll be your mistakes and something you can learn from.

We hope you like the items we recommend and discuss! MUO has affiliateand sponsored partnerships, so we receive a share of the revenue from some of your purchases. Thiswon’t affect the price you pay and helps us offer the best product recommendations.

James has a BSc in Artificial Intelligence and is CompTIA A+ and Network+ certified. When he's not busy as Hardware Reviews Editor, he enjoys LEGO, VR, and board games. Before joining MakeUseOf, he was a lighting technician, English teacher, and data center engineer.

Tags:  how much does a 3d printer cost