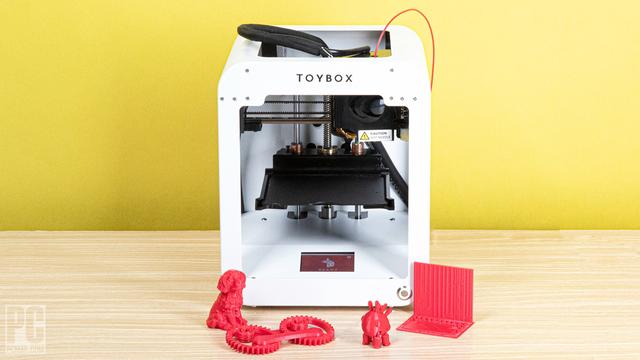 The Toybox 3D Printer, a budget 3D printer geared to children, delivers on its name: It generates lots of little playthings with ease. (It starts at $329; we tested the $389 Deluxe bundle discussed below.) It offers reliable one-touch printing of simple objects from an iOS or Android device or a web browser, with solid print quality and no misprints in our testing. The Toybox lets you choose among more than 2,000 printable objects or projects, or you can import 3D files created elsewhere. You can even draw objects to be printed. Its most substantial shortfall is its tiny print area, but in printing objects from the Toybox catalog, that's not a limiting factor. This rare 3D printer—rare because it's closer to foolproof than most—earns an Editors' Choice award for basic budget 3D printing. Plus, we've seen the bundles heavily discounted sold directly from Toybox.

A 3D Printer Designed for Kids

A few months ago, I started seeing a flurry of online ads for the Toybox 3D Printer, a 3D printer for kids. I contacted the manufacturer, California-based Toybox Labs, which loaned us the test unit used for this review. The Toybox is intended for youngsters at least 5 years old, and adult supervision is recommended for kids' use. According to Toybox Labs, the printer is designed for entertainment and ease of use.

You Can Trust Our Reviews Since 1982, PCMag has tested and rated thousands of products to help you make better buying decisions. (Read our editorial mission.)(Photo: Molly Flores)

The Toybox's build area—3.5 by 3.1 by 2.8 inches—is equally petite. The Replicator Mini (3.9 by 3.9 by 4.9 inches) has a slightly larger build area; few printers have print areas nearly as small. This all means that it's limited to printing small toys, or small pieces of larger toys.

Setting up the printer is a cinch. You attach the "printer food holder" (aka, the filament spool) to the back of the Toybox and place a spool of "printer food" (PLA filament) on the holder. Then, you put the flexible, magnetized print bed in place on the print platform.

When you first plug in the printer and turn it on, a message appears on its LCD guiding you to a page to download the Toybox app. (Versions of the app are available for iOS and Android.) Once you install the app, you set up a free Toybox account and sync your device to the printer. (A name beginning with "Toybox" should appear on your list of available wireless networks.) You'll enter a six-digit code that appears on the Toybox's LCD into your mobile device to authenticate the connection.

I tested the Toybox app on an iPhone 11 Pro. (You could use an iPhone or an Android device, or can launch prints from the Toybox site in your browser once you enter your account information.) The Toybox app's interface gives you several options listed at the bottom. Explore, the default, lets you browse, or search for, toys or collections in the Toybox catalog. For each, it gives you an estimated length of the print job in minutes. Tapping a toy gives you some information about the object and its creator. Pressing the Print Me button launches the print job. It's as simple as that. 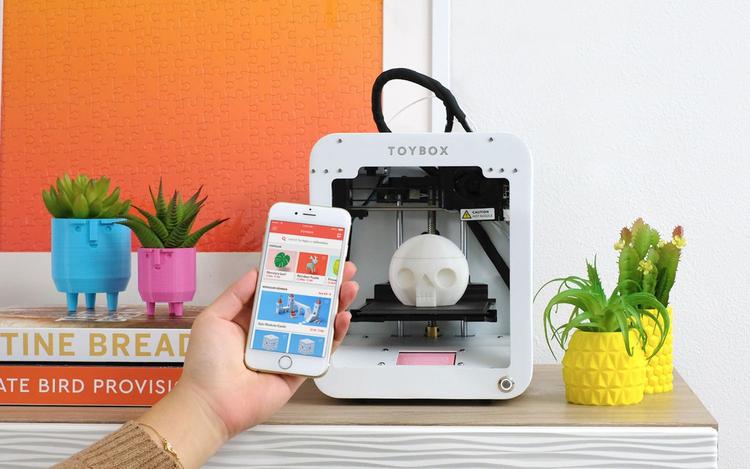 The Create option gives you several choices of activities to do in the so-called Creator Space. Under Apps, for example, you can create Block Buddies, printable human figures that you design, selecting their hair style and color, facial features, skin color, and the style and color of various clothing items. When you're done, you give your Block Buddy a name, and save it. You'll see your Block Buddies whenever you open the app.

Sample screens from the app's interface, left to right

Tap on a Block Buddy in the app, and you'll see a list of components that need to be printed in order for you to assemble it. You can print all the parts of one color, switch filament spools, print more of them in another color, and keep on switching until the parts are complete. Then you can piece them together.

The Build a Car app works along the same lines: You can design a car, adding features and color to it. Under Draw, you can create a design or doodle and print it in 3D. Another feature, Picture, lets you import a photo to be rendered in 3D for printing. You can't do justice fully to a 3D image which is converted from a single two-dimensional photo, of course, but Toybox does a credible job. Cool stuff.

Last, you can import an existing 3D file in STL, OBJ, 3MF, or GCODE formats. I tried importing a GCODE file, but it turned out it was too large. GCODE files contain printing instructions that are relevant to the printer it was originally formatted for (in a program such as Cura). You might be better off working with a format such as STL, which hasn't been "sliced" for printing.

The Print Bed and the Filament

The Toybox's print bed should not require leveling—I did not adjust it at all during my time with it. Should the printer need to be calibrated—the troubleshooting section of Toybox's Help resources describes several situations in which that may be desirable—you turn a screw on the back of the build platform using an Allen key.

Removing a printed object from the print bed, often a source of headaches in 3D printers, could not be easier than with the Toybox. You remove the bed—which is magnetically stuck to the print platform—from the printer with the object still in place on it. You then flex the bed gently once or twice, and the object pulls off with ease. Return the print bed to the platform, and you're ready to print again.

In terms of filament support, the Toybox is a PLA-only printer, which is a fitting choice for a printer geared to kids. It is safe—neither the printed objects nor the (minimal) fumes it may give off while printing are toxic—and relatively easy to work with. Toybox sells standard half-pound spools of PLA in a variety of colors for $10 each, and specialty filaments such as gloss and sparkle varieties for $14 a spool. That pricing is good; for example, MakerBot sells half-pound standard spools for its Replicator printers for $19, and you can get them for a few dollars less through retailers.

Based on Toybox's sale pricing at this writing ($249 for the base bundle, $299 for the Deluxe), the so-called Toybox Deluxe Bundle (the printer plus eight standard spools of different colors) costs $50 more than the Starter Bundle (the printer plus one standard spool). So, in essence, with the Deluxe package you get two spools for free. (The difference is $60 if you look at the list prices.)

And trust us: You will want filaments of different colors, because many of the canned projects that Toybox offers involve printing multiple pieces and combining them, and often varying the piece colors can enhance the toy or object.

A Trove of Gears and Crawling Things

I printed 10 test objects, all from the Toybox catalog. They all printed successfully on the first try, with no misprints or significant errors. Overall print quality was about average for a filament-based 3D printer. Some prints looked a bit rough-hewn, often with a ropy texture on top, and many had tails of loose filament that needed to be trimmed or pulled off. Still, the quality was solid enough—you can be assured that the Toybox can print objects that a child (or an adult, for that matter) will love.

Even better, a good percentage of the objects in the Toybox catalog have moving parts: Wheels turn, a cube unfolds, gears turn and mesh, legs move. For the most part, these kinds of objects are printed pre-assembled, in one pass, although with the gears I had to print them separately and then snap them together. My favorites are the multi-segmented reptiles, which printed with the individual segments chain-linked together, providing both flexibility and strength—at least, I haven't accidentally pulled one apart yet (and I don't have the heart to dismember one, even as a stress test).

Fun for Kids of Any Age

The Toybox 3D Printer is a great choice as a 3D printer for children. In my testing, it provided reliable, misprint-free printing of a variety of objects, many of them including hinges or other moving parts. I was very impressed by these delightful, ingenious toys. That said, overall print quality is merely average, as befitting a printer with a maximum 200-micron resolution. And its tiny print area is the Toybox's main drawback.

Toybox includes a large selection of toys and projects in its so-called catalog, and lets young (or not-so-young) creators make and print their own designs, either hand-drawn or from photos, in its Creator Space. You can import 3D-printable files, but that can prove tricky, and you're limited to the Toybox's small build volume.

The Toybox may not be a good substitute for a conventional hobbyist 3D printer, but it's a wonderful and quite successful device in its own right. It's bound to provide hours of creative entertainment for both children and the adults who assist them, and it's a clear pick as an Editors' Choice budget 3D printer geared to young people.

The Toybox 3D Printer works well as a model designed for children, offering reliable printing from a browser or mobile device and a few thousand toys to print, plus creative options to output drawings or photos. Just bear in mind the tiny build area.

Sign up for Lab Report to get the latest reviews and top product advice delivered right to your inbox.

This newsletter may contain advertising, deals, or affiliate links. Subscribing to a newsletter indicates your consent to our Terms of Use and Privacy Policy. You may unsubscribe from the newsletters at any time.

Thanks for signing up!

Your subscription has been confirmed. Keep an eye on your inbox!