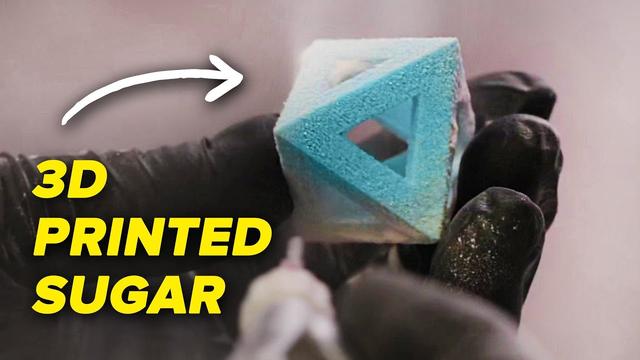 There’s something Willy Wonka-esque happening in an industrial studio at the edge of Lincoln Heights.

Tiny truffles, sugar cubes and dissolving drink additions that can infuse a cocktail with glitter and bitters are being built seemingly out of thin air, one layer at a time in whirring machines that create intricate, edible, colorful candies.

You won’t encounter a top-hatted candy magnate at Sugar Lab, a 3-D-printing confectionery where science meets sweets. Instead, there’s a small team of architects, designers and chefs who tinker with sugar sculptures and recipes, building with modded and food-safe 3-D printers that are more typically used for metalworking. Large-scale sugar sculptures and branded, custom treats are made for chefs and companies, while the tiniest, most dainty candy sets with themes such as holidays or Koreatown can be purchased on the company’s website.

While many 3-D-printed candies start with paste, Sugar Lab prints with fine powdered sugar — as well as dehydrated spices and vegetables — to produce treats like peppermint-flavored latte cups (which are piped with mocha chocolate later in the process) or tart lime-and-salt luchador masks that are filled with caramelized-pineapple ganache.

They have a whimsical, surprising feel — appropriate for a company that was born of a “what if” moment.

In 2011, Sugar Lab founder and Chief Executive Kyle von Hasseln was an architecture student who found himself more fascinated with design than the practice of building. While studying at the Southern California Institute of Architecture he familiarized himself with the communal 3-D printers on campus and decided to invest in one for himself. “I wanted to start experimenting with the 3-D printers, kind of hacking them and seeing what else I could print with,” he said.

He purchased a 3-D printer the size of a dining table, flew to Colorado to retrieve it, drove it back to California and then parked it at his house. But Von Hasseln didn’t start with sugar. He laid the groundwork for his experimentation with sawdust and cement.

Then he had an epiphany: “Just to be kind of cheeky, because it was inexpensive, I tried sugar and it worked pretty well,” he recalled. “It was like a C+, while all the other materials were like a D or an F. And it was beautiful: It was kind of translucent — I was using table sugar at the time — and months later I started to realize, OK, if we actually rebuilt this printer carefully to be FDA [and] NSF [National Sanitation Foundation] certified, what would it be like to have a design firm for chefs?”

He started small, printing in all-white monochrome; his first shape was simple, probably a small cube. The first creation that made him realize he might actually have a business was a 3-D-printed sugar tiara that adorned a cupcake for his sister-in-law with her name written in cursive. It was created with a mouse on a laptop, a blend of water and sugar and maltodextrin — a vegetable starch, which helps to act as a binding agent —and the 3-D printer he bought in Colorado.He and his wife, Liz (who also goes by Ren), began to worry that others might beat them to market, so they headed to the downtown L.A. Central Library to research the patent process, constantly refreshing their web browsers for months out of fear that someone else would get there first. Von Hasseln came close to dropping out of school to pursue the printer full-time but decided to complete his degree while starting the business.

Around the time of Von Hasseln’s powdered-sugar experimentation, 3-D printing was booming, from machines advancing the medical field through the printing of prosthetics to hobbyists building basic shapes at home. The process — sometimes referred to as “additive manufacturing” — was conceptualized in the 1940s but didn’t develop much further until the 1970s, when it started to be used primarily for building metal objects. In the aughts and 2010s, thanks in part to the growth of industrial manufacturing and to ubiquitous 3-D-printing videos spreading through the internet, the field was full of interest, innovation and seed money. 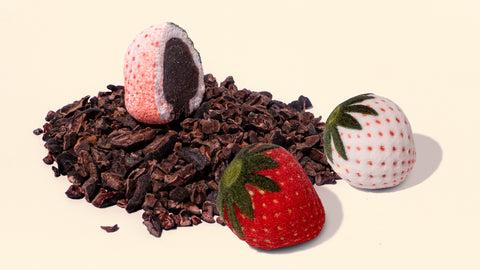 “MIT was working on it, NASA was working on it, other huge firms — full governments, like in the Netherlands — had research projects around it, and everyone else was extruding 3-Dpaste, like if you had a hot glue gun,” Von Hasseln said. “If you were a chef and you could pipe really carefully you could build up an object, and that’s the way they were doing it. It didn’t have color, the geometry was a little slumpy because it was paste, and we were just like, Why is nobody using powder technology?”

Kyle and Liz von Hasseln finished patenting the powdered-food 3-D printer and shortly thereafter, Sugar Lab was acquired by 3-D Systems, a South Carolina-based company. With their newfound funding, the Von Hasselns tapped friend, designer and fellow SCI-Arc grad William Hu to help creative direct — and connect the company to the culinary community. At the start, their focus was solely on restaurants and businesses; in late 2020, they launched their retail operation.

Hu’s fascination with food began early, spurred by spending time in his father’s Chinese restaurant in Texas. Like Von Hasseln, he was drawn more to architecture’s design training than the idea of working for a traditional firm and relished creating with sugar, a new medium in the 3-D-printing space. “I’m also just a huge foodie, and so I love finding new spots and cooking and tools,” Hu said. “I use that to inspire our work in the lab — and with architecture and food together, I was just at a playground.”

Hu works with chefs to develop their ideas into a 3-D-printed sweet or savory object, be it an onion cube that dissolves with a tableside pour of oxtail beef broth at Josiah Citrin’s Mélisse to create an interactive soup course or a 3-D-printed sugar honeycomb flavored with lavender blossom for Las Vegas chef Yuri Szarzewski, who pipes the shape with fresh goat cheese and drizzles it all with honey for his cheese plate. These more customized orders fall under Sugar Lab Pro, while the higher-volume customized pieces — like a few hundred pairs of tiny, sugar-sculpted shoes for an athletic brand’s launch party — fall underCurrant 3D, a Sugar Lab offshoot.

Another partner, Meagan Bozeman, handles operations for the company, including assembling its own culinary team and helping to build the Lincoln Heights kitchen space where production takes place. Its crew of in-house chefs helps the founder-designers understand their printers’ culinary potential. Mei Lin, a “Top Chef” winner and the brain behind Silver Lake Sichuan fried chicken shop Daybird, began consulting with Sugar Lab in 2015.

“I was brought in to consult, but it was really just me being enamored with everything that was going on and me putting my two cents in — pairing different flavors with different shapes,” she said.

They would brainstorm design, discussing which flavors could be added to specific shapes and models. Not all powders work; powdered honey got gloopy with the addition of the water, and powdered gum was a disaster. Once, Lin created a flower candy flavored with passion fruit. She also tried a hollow-printed quail egg, which she filled with egg yolk jam and beef tartare at the bottom. She tinkered with alcohol and freeze-dried fruit — even attempting cricket powder as a binding agent.

The similarities to 3-D printing and cooking, Von Hasseln says, made the process exciting to chefs from the very beginning. They saw the potential even before he did.

“It works in such a simple way that’s very similar to how people make food already, especially in baking,” Von Hasseln said. “You separate the wet and dry ingredients, which are essentially just water and then the sugar and maltodextrin. We mix them really precisely ...but it’s the same effect of mixing frosting in a bowl, and if you leave that out for a couple hours it hardens. The evaporation is causing crystallization of those ingredients that are adjacent to each other, and are so fine, and that’s what makes them solid. It’s just mixing wet and dry ingredients super precisely. That’s all we do.”

Of course the mechanics and the process are a bit more complex than Von Hasseln’s mixing-bowl analogy. It took years of design and testing to build the printers, as well as communicating regularly with the NSF to ensure products could be created safely — and that the machines could be cleaned by anyone without a keen awareness of the 3-D printing industry.

Although its technology is unlike most other companies, Sugar Lab is far from the only businessin the food 3-D-printing space.Many use food in other states of matter, as well as other printing mechanics, and are geared toward home-cook enthusiasts. The Mycusini printer, for instance, retails for about $560 and 3-D prints chocolate using cartridges that melt and can be used to create shapes or written words. Millions of 3-D printers have been manufactured, and many of them are designed for home use from companies such as Voxelab, XVico and Phrozen; a few can be purchased for less than $200. Most of them rely on pastes rather than powders.

The place is humming

On a fall afternoon in the Sugar Lab kitchen, just a few blocks from its industrial office space, kitchen manager and resident pastry chef Victoria Johnson was running three of the team’s printers. Two were producing items found in Sugar Lab’sKoreatown-inspired kit— kimchi bouillon, meant to drop into soup — while another printer was building a new and hollow walnut shape for chef Szarzewski‘s Vegas restaurant.

Johnson receives digital files from designers, programs them into the machines, and then prints them, a process in which several layers of material are gradually added to form one compact piece of candy. One arm of the printer spreads the powdered sugar, followed by a swift sweep of a second arm, which adds the water that binds the layers together. Production cantake up to nine hours, depending on the volume of work.

For Johnson, a former Disneyland candy- and cake-maker, the technology offers endless possibility. In the kitchen, she whips up caramels and ganaches in small pots overinduction burners and reduces stouts to flavor a line of truffles shaped like miniature craft-beer cans. She helps create tiny latte truffles, miniature holiday-sweater marshmallows, and dissolvable “potion” glitter bombs and sugar skulls for cocktails.

Tiny red and green spheres roll around on one tray, playful “apple-covered caramel” bites — filled with lush caramel and apple butter — that riff on one of autumn’s most iconic flavor combinations. They’re nothing like Willy Wonka’s never-depleting Everlasting Gobstoppers, and intentionally so; Sugar Lab’s sweets were created to disappear — and be replaced by new, tech-possible varieties each season.